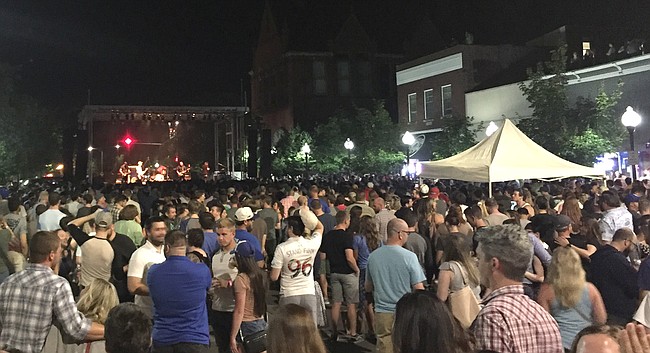 Concertgoers fill the 1000 block of Massachusetts Street to watch the Get Up Kids as part of the inaugural Live on Mass event, June 24, 2017.

Even if Saturday’s first football game of the season (against Southeast Missouri State) doesn’t pan out for the Jayhawks, KU fans may still have occasion to celebrate this weekend.

On Friday night, the Granada Theater will host the third installment of its free “Live on Mass” concert series, and everyone’s invited. The entire 1000 block of Massachusetts Street will be closed to traffic for the massive street party, this time presented jointly by the Granada, KU Athletics and the KU Alumni Association.

Gates will open at 6 p.m., followed by a pep rally at 7:30 p.m. Live music — featuring Kansas City’s The Phantastics, with special guests The Band That Saved the World, DJ Josh Powers and the Lucas Barker Band — starts at 6:30 p.m.

“I would hope that this event could perform like our other ‘Live on Mass’ events,” said Granada owner Mike Logan. “It’s going to be 80 degrees and beautiful outside.”

The first two concerts, in late June and early July, each brought more than 6,500 people to downtown Lawrence, Logan said. Friday’s “Live on Mass” street party is the brainchild of Logan and KU Athletics, who joined forces earlier this summer in an effort to “build excitement” for KU’s upcoming football season, he said.

Game attendance at Memorial Stadium has flat-lined in recent years. Friday’s event uses the “KU Kickoff” tagline as its theme, borrowing from the kinds of barnstorming events KU Athletics has hosted for years in markets outside Lawrence, Logan said. Bringing that particular brand of energy to KU’s hometown and creating a buzz around Jayhawk football, he said, could lead to big economic payoffs for local businesses.

Each of the more than a dozen businesses along the 1000 block of Massachusetts Street have signed on to sponsor the event, Logan said, and they plan to interact with the crowds gathered there. Restaurants, like Aladdin Café and Aimee’s Coffeehouse, will provide outdoor seating and food, and alcoholic beverages will be available for purchase along the street.

Saturday evening games, Logan said, sometimes eliminate the need for some out-of-towners to book Lawrence hotel rooms on Friday nights. Logan is hoping events like “Live on Mass” will keep visitors in town not just on game day but throughout game day weekend.

“Whether it’s ‘Live on Mass’ or another event, I really think Lawrence needs to be paying attention to that,” Logan said of making the city a “game day destination.”

"I tell you," he said, "Lawrence does love a street festival."

Crews will begin closing the 1000 block of Massachusetts around 10 a.m. Friday for the event.