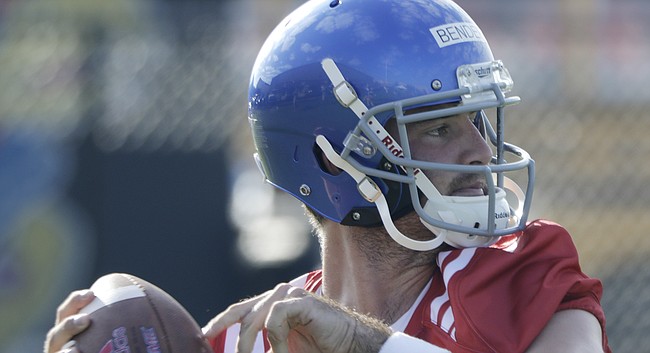 Six practices into Kansas football’s preseason camp, the quarterback competition remains as close as when it began in January, with the arrival of junior transfer Peyton Bender.

Head coach David Beaty offered no indications of redshirt sophomore Carter Stanley or Bender taking the lead or out-playing the other at practices this week. Beaty only reveled he has enjoyed watching the pair of quarterbacks vie for the starting job.

“I think we've got two very talented guys there that are operating this offense at a really high level, which is good,” Beaty said.

Their position coach, Garrett Riley, with the two QB candidates at every snap and every meeting, also liked what he saw, and noticed important progress from both Bender and Stanley.

“Both guys are creating, making some innovative plays when things break down. Both of them have done that and that’s been a real positive from where we started in the spring,” Riley said. “I think both of them are gaining confidence and getting a comfort level with just our style.”

Kansas sophomore quarterback Carter Stanley flips a pass during a drill in the team's second practice of fall camp on Tuesday, Aug. 1, 2017.

It used to be that when KU’s new offensive coordinator Doug Meacham or Riley asked something of the quarterbacks, the players would have to process it. Riley said now they have a better understanding of exactly what is wanted with each play call.

“They’re certainly grabbing hold of that and you’re starting to see command of the offense… They’re starting to really run the show, and that’s what’s been positive thus far,” Riley said of what most impressed him this week. “Now have we been perfect? Absolutely not. But for the most part I’ve been pleased with that.”

Bender, who learned the Air Raid at Washington State, under Mike Leach, and put up big numbers as a juco standout in 2016 at Itawamba Community College (Miss.), estimates the biggest gains he has displayed at camp coincide with his broad approach to the position.

“Personally, with my play, I think it’s just being consistent, which is something I strive to do every day. I want to be the same guy day in and day out, because that makes you reliable,” Bender said. “You know what you’re going to get. So I’ve been pleased with my consistency, but there are a ton of things I still need to work on.”

Stanley, who started the final three games of 2016 for KU, has kept pace with his challenger and felt positive about what he has shown thus far, too.

“I just overall feel more comfortable in Coach Meacham’s offense just compared to the spring,” Stanley said. “I think I’m definitely more comfortable with where to go with the ball and make quicker decisions.”

Bender said his list of things to improve include communicating plays to the offensive line and receivers, as well as continuing to familiarize himself with defensive formations and recognizing where defenders are headed after the snap.

“I feel like I have a pretty good understanding of what they’re doing, but there’s a few times where I think the strong safety’s going to roll down but he’ll get into deep coverage,” Bender gave as an example. “Just knowing what to do after that and being able to react quickly is something you’re always wanting to improve on as a quarterback.”

Likewise, Stanley said his primary goals for further improvement revolve around always taking what the defense gives him and making the right reads.

Riley said both Bender and Stanley occasionally fall into the trap of trying to do too much by themselves instead of utilizing the talented skill players around them.

Even so, their head coach, while not ready to name a No. 1 QB, remains optimistic about KU’s potential at the position.

“Both of them, like I said, they're very talented,” Beaty said. “I think that they do a lot of things very differently. But they actually do both move pretty well, which is something that I don't know that I thought Peyton was such a good-moving guy, but he moves pretty well. He's very efficient back there in the pocket.”

Good to hear. Thanks for the article. And we will have both of these guys next year too. Hopefully, finally, some stability at quarterback. That's been sorely missing. On another note i think we should make the red top, gray bottom uni we donned in the Texas win our permanent home uniform.

This is extremely exciting! I would be surprised if, 1. HCDB names a starter before the prep week for SEMO 2. Bender isn't the starter.

I'd be cool with the red tops - gray pants - blue helmets for all home games. But that's not going to happen because of the fad of new unis every game.

It's good that Stanley and Bender are operating the "Air Raid" at a high level in camp. It'd be great if they can do it in real games. I very much want to believe they can, but how many times in the post-Mangino era has the LJW reported on how good the team looks in pre-season practice, only for them to give us the same pile of crap through most of the season?

To Brock Wells' point above, I want to see KU in red helmets with yellow facemasks and Jayhawk logos on either side, blue jerseys with white numerals, and blue pants for home games, so that they look like Jayhawks. For away games, put them in blue helmets with white facemasks and Jayhawk logos on either side, white jerseys with blue numerals, and blue pants.

I will say this right now, when it's all said and done come game # 1 Bender will be the starting QB. Whether that's the right call who knows, I'm not there at the practices, no of us are, I just get this erie feeling the way they have hyped him, gives me this feeling all over again about our last time scenario of the 2 QB'S that came in. I hope not, don't need to go through that again. I've always felt that Stanley was probably our QB, but again I'm not the Coach that's why Coach Beaty is where he is, and I'm where I'm at, love him as a Coach And I hope Bender proves me . - -I just wish it seems like the last 3-4 yrs that we haven't had a QB that has been able to distinguish himself as the starter - -distance himself, looking for a good season I'm ready whoever the QB turns out to be just hope he can maintain some drives and help our defense not have to put as much time on the field - -watch it will be Bender

"Bender will be the starting QB...I just get this erie feeling the way they have hyped him"

That hype has come mostly from Keegan's one-man crusade for Bender.

Ridiculous statement. Keegan has clearly not campaigned for Bender. In fact, last year, he was firmly in Stanley camp pretty early on. No need to create imaginary issues - this team will have plenty of real challenges this year.

I totally hate the term "fake news." But with this team and where it is in development, this is fake news. Doesn't matter who is named "the starter." It will only matter regarding who can perform on game day. And...who can stay healthy. With our offensive line woes it might be good to hear more news about the third in line. Didn't Carter Stanley begin last year as 3rd string?

This is kind of the same thought as me, If we don't have any better protection then in the past - - -it's not gonna matter. - Not saying we aren't going to but if it is the same - -game over. Cause it all goes hand in hand if the QB has to spend 3/4 of the game running for his life throwing off balance throws to avoid sacks which in turn sets up INT"S, bad field position, not being able to sub stain drives which in turn leads the defense having to play the majority of the game and as I've said doesn't matter how good your defense is you put them on the field for that long - -they gonna give up scores. That's also why like you say WHAT HAPPENED to Starks heard all this positive about him when he came in and now - -nothing. - -I know he can't be that bad

I don't see the absence of Starks in the same way. We've also heard next-to-nothing about Freshman QB.

Stanley finished the season as the starter. Bender came in with two years of experience in the offense. These guys should be the clear leaders at the position, and should end up being QB1 and QB2 for the next two years.

QB3 is a pretty quiet spot, but it will be interesting to see who wins it, assuming we see a depth chart that goes 3-deep.