KU passing game could get boost with return of Jeremiah Booker

For all the touchdowns and highlight plays the Kansas football team’s passing attack put together in a season-opening blowout, the Jayhawks might get a boost from another target Saturday against Ohio.

“Jeremiah, man. I’ll tell you what. You’re talkin’ about a hard-workin’ dude. He really is,” Beaty said Monday morning on the Big 12 coaches media teleconference. “I know that he was crushed not getting on the field. But, you know, he had kind of a high ankle sprain that he was dealing with and he wasn’t completely ready yet, and hopefully he’ll be back ready to go full tilt this week.”

As a true freshman in 2015, Booker played in eight games, started six and caught 23 passes for 228 yards.

Beaty and his staff expect the 6-foot-2, 195-pound receiver from College Station, Texas, to play a greater role in KU’s offense as a sophomore, and the head coach hopes that will begin this week — assuming Booker gets cleared to play versus Ohio (1:30 p.m. kickoff Saturday at Memorial Stadium).

“We think he will be. He was close,” Beaty said of Booker trying to play in the opener. “He’s a big part of what we want to do offensively and we didn’t want to take any chances on that thing getting any worse — and we were in a position where we could do that.”

Indeed, KU’s two-quarterback system racked up 399 passing yards without Booker. Sophomore Tyler Patrick, who started in his place, caught five passes for 51 yards, including a 20-yard touchdown from redshirt junior Montell Cozart in the third quarter. 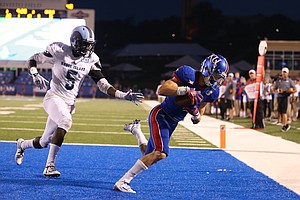 Kansas wide receiver Tyler Patrick (4) pulls in a touchdown pass in the end zone past Rhode Island defensive back Abdul Ibrahim (5) during the third quarter on Saturday, Sept. 3, 2016 at Memorial Stadium.

Said Patrick, after 10 different Jayhawks had at least one reception in the debut of Beaty’s Air Raid offense: “You can just plug anyone in at any point and feel completely comfortable that they’re going to get the job done. Everyone is just making everyone better and competing every day, and that’s a really good thing.”

Senior offensive lineman Jordan Shelley-Smith, Beaty said, had to sit out the Rhode Island win because he is recovering from a concussion. The 6-5, 300-pound tackle remains questionable for this week.

“We’ll see, and be very cautious with him,” Beaty said of Shelley-Smith, “and make sure that his health is great before we put him back in for full activities. We’ll see how things go with him.”

Building on a win

While Beaty and his assistant coaches obviously were thrilled to get the season started off right, the head coach said one challenge for the rest of the week would be focusing on weaknesses exposed in KU’s first victory.

“You know, sometimes when you win things kind of get glazed over, and as coaches we guard highly against that,” Beaty said. “We talk to our team all the time about the thing that makes us better is telling you the truth. So Monday for us is about the truth… They’ll welcome that and they’ll get better as a result.”

Montell had a 3 touchdown game against SEMO in 2014 so I'm still hesitant to think anything of his 3 TDs against Rhode Island...

He did look better than against SEMO. But so did Willis and Stanley. Simplifying the playbook might be why.

URI was little more than a glorified scrimmage. This week is when we really find out how much progress was made in the offseason.

We'll find out things this week, but probably not all of those things will be 100% positive. We need to be realistic as to how far our team still has to improve on the way to respectability and beyond.

Damn, it's great to feel like the team can and will keep moving in the right direction!

It's really good to hear that Roberts and Williams are expected back also. Hopefully Shelley-Smith heals soon as well.