Notebook: KU defense not worried about who gets most tackles

Kansas junior linebacker Marcquis Roberts (5) breaks through the line to bring down Kansas State fullback Winston Dimel behind the line during the annual Sunflower Showdown game Saturday at Memorial Stadium.

On a number of occasions over the past couple of months when head coach David Beaty got on the subject of his Kansas football team’s defense, he mentioned in a somewhat joking fashion he wouldn’t want Fish Smithson leading the team in tackles again.

In the race to surpass KU’s senior safety in that category during the months ahead, the most likely candidates play linebacker. While Smithson’s 111 total tackles topped the unit a year ago, Joe Dineen (86) and Marcquis Roberts (71) often contributed to stops, as well.

As Kansas defensive coordinator Clint Bowen prepared for the season, however, he didn’t waste much time thinking about who will rack up the most tackles. In fact, asked if he wanted to see more production from his linebackers this fall, Bowen balked at the notion.

“In this day and age it’s so open a lot of times the offense can dictate who’s gonna make some tackles, you know,” Bowen said. “They’ve got something to say about it. But our linebackers are capable guys. We’ve got some guys at the front (on the defensive line) and I think the tackles kind of come as they’re supposed to.”

Dineen said all of KU’s linebackers should benefit as play-makers thanks to the enhancements made by the defensive linemen in front of them during the offseason. He called the D-line the most improved unit on the team. The junior linebacker cited sophomore tackles Daniel Wise and D.J. Williams, junior tackle Isi Holani and sophomore end Dorance Armstrong Jr. as players who have upgraded their skill sets since last season.

“All those guys, Olobia (Anthony, a senior end), are stepping up huge and they’re making a lot of plays — a lot of plays,” Dineen said. “I’m excited to see what they do on Saturday.”

After citing the talent and locker room presence provided by junior LaQuvionte Gonzalez, a junior transfer from Texas A & M, Phillips added he looks forward to the sophomore debut of Steven Sims Jr., who caught 30 passes for 349 yards as a true freshman. 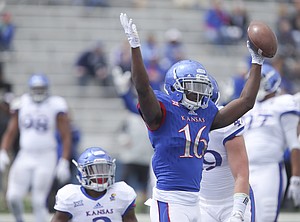 Kansas wide receiver Steven Sims Jr. (16) throws up his arms after falling into the end zone for a touchdown during the Spring Game on Saturday, April 9, 2016 at Memorial Stadium.

“I just want to see if his commitment pays off,” Phillips said of Sims’ offseason work, “because he’s definitely committed himself to getting better.”

With Gonzalez, Sims, sophomore Jeremiah Booker, and upperclassmen such as junior Bobby Hartzog Jr. and seniors Austin Moses and Shakiem Barbel involved at receiver, Phillips said it’s a mature group, so he doesn’t think many will have a problem playing under the Memorial Stadium lights.

“Obviously there’s a couple of freshmen that may get an opportunity to play, and you kind of look to see how big their eyes get,” Phillips added. “But obviously the rest of these guys have been there and done that. I’m sure they’re anxious to get back into it.”

With sophomores Emmanuel Moore and Tyler Patrick (not to mention KU’s freshman receivers) in the mix, too, Phillips has sufficient options. So just how many from his position room will play against the Rams?

“All of them, hopefully,” Phillips replied, laughing. “I tell those guys: All of them will play. Now whether they play offensively or special teams is yet to be determined. But I expect all of those guys to contribute this weekend.”

KU, of course, enters its season debut without having named a starting quarterback. Beaty said that wouldn’t be the case if sophomore Ryan Willis had progressed ahead of schedule and left the developmental stages of his college career.

“Oh, yeah, he's a baby,” the coach said. “He played a few games last year. He got knocked around a little bit. He is by no means a finished product at all. If he was, he would be named the starting quarterback. And he's not. We don't have a starter yet. We didn't have that separation.”

Beaty would only reveal this week that Willis, redshirt junior Montell Cozart and redshirt freshman Carter Stanley were in the mix to become KU’s first-string QB. The coach said all of them performed at a high level during August practices.

“So the good news is, there is not a hair's separation from them statistically in fall camp,” Beaty said. “I mean, that's what makes it extremely difficult is their production was very, very similar. And, you know, hey, both those guys, they know that it's gonna come down to this week to see who goes in first, and then they may not be in there long and the other guy comes in there. We'll see.”

It is really hard to believe there is so little difference in the capability of these three guys. That could be good and it could be bad. Anxious to see first hand to decide for myself which I think provides the best opportunities to win.

Jim, I tend to think not having a clear starting QB is not good. One would hope your choice would be obvious at the start of the season.
However, I was at the game when Todd Ressing finally got into the game versus Colorado. It wasn't a brilliant move by Coach Mangino... we were getting our butts handed to us and needed to try something else. That worked out pretty darn well for everyone; immediately. It's tough to replicate game situations and pressure in practice. Perhaps Coach Beaty just wants to give them each a shot in a game and see how they react before committing to a player.

It will be alright. Yeah, we'd like to know who the starting QB is going to be.

But, this will all play itself out. We all are realistic enough to know that this season is still going to be a struggle.

But, we have 3 QB's competing for the starting spot. And, I don't expect this issue to be totally resolved after the Rhode Island game.

By the time B12 conference competition starts, I would think that Coach Beaty and Liken's will have figured out who they want to lead the offensive unit into conference play.

So we all know Cozart can play with the red jersey on and we all know he can't when it comes off. Can we end the discussion already? I am so tired of this droning on year after year. He is not a D1 QB. Give the ball to Willis or Stanley because clearly, right now, one of them are our future and Cozart is nothing more than a guy filling a roster spot.

Word around campus is Cozart will start...if they are all so close I would go with Willis. Cozart isn't a "baby" and should have proven himself by now. Doesn't make sense to me.

In the same presser where Coach said there wasn't a hair between the 3 during camp he also later slipped to admit that Carter was slightly behind - at least a hair it would seem.

I take the comment above to mean that it essentially was Willis' job to lose but didn't show the requisite leadership he expects. By all reports Cozart has shown the desired leadership and that is of value to Coach. It gets back to comments he's made about laying a good foundation for future success even if it comes at the cost of immediate short term results.