Kansas junior Setter Ainise Havili drops the ball over the net against West Virginia on Thursday, Oct. 20, 2016 in the Horejsi Center.

It’s an image that can make even the most promising of seasons flash before one’s eyes: All-American drops to floor and athletic trainer rushes in from sideline to come to the athlete’s aid.

Havili eventually stood up and walked to the sideline, where athletic trainer Maggie Marion put her through the initial steps of concussion protocol.

Practicing safety first, Marion advised head coach Ray Bechard to play the rest of the match without Havili, who watched with a cut lip but in good spirits, standing with teammates.

“It’s terrifying,” fellow All-American Kelsie Payne said of what it was like watching Havili on the floor. 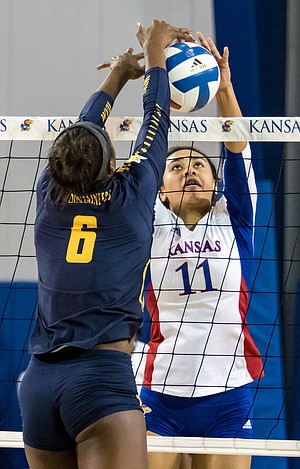 Payne went on to say that in the attack Kansas runs, the setter is “super, super, super” valuable.

Bechard, who called Havili, “the heart and soul of our team,” said the setter, “popped her lip pretty good. People get pretty anxious any time you hit your head on anything, so we’re going to take every precaution we need to take. We’ll see how she feels in the morning. Hopefully, she’ll be fine. Her lip’s probably going to be a little bit swollen.”

Kansas led 22-16 at the time of Havili’s departure. Rigdon explained the initial confusion that vanished once senior Maggie Anderson got to the middle of the floor to steady things.

“At first we had to realize what rotation we were in because Maggie had already subbed in for our libero, so we were kind of mixed up on that,” Rigdon said. “Once Maggie came in and we knew what rotation we were in, Maggie sets us all the time, so she knows how we like it and how to hit the ball. She’s good. We’re comfortable with her.”

The Jayhawks ran their home-court winning streak to 13 matches and improved to 18-2 overall and 7-1 midway through the Big 12 schedule. KU has swept its past four matches. West Virginia (11-11 overall, 2-6 in the Big 12) fell to eighth place in the nine-team Big 12 (Oklahoma State does not field a volleyball squad).

The Jayhawks have won 30 of their last 31 matches at Horejsi, are ranked No. 6 in the nation and have been in the top 10 for the past 19 weeks.

While watching on TV, we held our breaths when Ainise went down. She really is key to the flow of the game and setting up the other players. Hope the severity of the collision is less than it looked at the time.