Kansas quarterback Carter Stanley (9) is smothered by the Baylor defense just before the goal line to avoid a safety during the fourth quarter on Saturday, Oct. 15, 2016 at McLane Stadium in Waco, Texas.

Gibson, a fourth-year junior, mistook the voice of a Baylor player calling out the snap count for that of quarterback Ryan Willis, according to head coach David Beaty.

The snap came way before Willis expected it, Baylor recovered at the Kansas 4 and scored one play later, making it 35-0 on the way to a 42-0 halftime deficit.

“It was inexcusable, first of all,” Beaty said. “Let me just say that. But what Joe said was that the nose tackle called out the snap count. Now, he didn’t call it out the whole day, but he called the snap count out on that particular play. And, hey, sometimes they get it, sometimes they don’t. It got Joe on that play. Joe’s one of our smarter guys, so it doesn’t happen to that guy very often.” 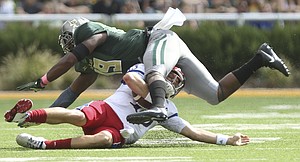 Had my interview request been passed on to Gibson, he would have shown up, given me a string of quotes accepting blame and exonerating teammates and coaches. He would have shown what a stand-up guy he is and his quotes would have filled the remainder of this column.

Since the request was not passed along to him by media relations, and I still have to fill the rest of this space, I guess the best way to do it is to review how Beaty’s decision after last season to take control of coordinating his version of the Air Raid offense, coaching quarterbacks and calling offensive plays has worked out, precisely halfway through the season.

As so often has been the case this season, KU found itself in dire straits, boom, like that. Willis stared down Steven Sims and Baylor cornerback Ryan Reid jumped the route and rode Telegraph Road 64 yards down the right sideline for a pick-six that made it 14-0 with 8:40 left in the first quarter. The way Willis had been able to complete passes to the sideline before that, he had to be thinking, “Were they setting me up?” as he watched Reid punch any cornerback’s ticket to heaven.

Reid picked off another and didn’t quite make it to the end zone, this time returning it 52 yards, as opposed to 64 yards for the TD.

By the end of the first quarter, Kansas trailed, 21-0 and by halftime it was 42-0, even though the Kansas defense held Baylor scoreless on three consecutive possessions.

“We game-planned for the outs and just certain routes that they run,” Reid said afterward. “It changed our whole game plan.”

Play-by-play man Tim Brando, who has called a few games in his day, at one point during the telecast said something similar, something about Kansas not fooling anybody.

Willis isn’t the first quarterback to lock in on a receiver, thereby giving the defender an advantage. He has a problem with telegraphing throws, but it's not always all his fault. Too often, the pocket already has collapsed by the time he can look at more than one receiver.

It’s not an easy offense for a quarterback to run or a coach to coordinate, in part because the offensive line lacks game experience and ample years in the weight room to compete against Big 12 behemoths.

Those factors were easy to see, but Beaty didn’t read it that way, so he demoted offensive coordinator Rob Likens to walk-around guy and took over the offense, believing he could fix what ailed it during an 0-12 season in 2015.

That was as bad a misread on Beaty’s part as any committed by Willis on Saturday.

So far, not so good for the Beaty-coordinated offense. Other than the 55 points Kansas scored on Rhode Island (1-6, outscored a combined 48-3 in the past two weeks by Villanova and Stony Brook), the Jayhawks have averaged 15.4 points.

Even if you want to cut Beaty slack for not having much to work with on offense, you can’t acquit him for not realizing that he had so little with which to work.

When the offeseason arrives, Beaty and Zenger must put their heads together to figure out how to silence the echos of the Beaty-to-OC decision.

Give the job back to Likens, who has one year remaining on a three-year, $1.05 million guaranteed deal? Promote wide receivers coach Jason Phillips to offensive coordinator and put Likens in charge of the receivers? Hire a new OC from outside the program?

Leave it alone, sit back and enjoy the basketball team travel a road it hopes leads to Phoenix?

— See what people were saying about KU's matchup against Baylor during KUsports.com’s live coverage.

More news and notes from the loss against Baylor

And the clown show that is KU football continues...

Look at the photo 3 offensive lineman watching the qb get killed!

Kansas has to stop running those quick outs, especially so early in the game. Everyone...and I mean everyone knows they're coming!!!

...Zenger was displeased with the offense last season, and got heads together with Beaty and told him to take more responsibility, and Likens' demotion was a result of that conversation?

Let that roast your rheostats for a minute.

Have to agree 100% with Tom's assessment. Had the same idea and watching yet another embarrassing offensive performance reinforced that it is time for the head coach to focus on the team and find somebody that can develop a game plan that is not so predicable. The vertical game is not working for a myriad of reasons and continues to loss yards. Regarding the fumble by Gibson, it never even got close to reaching the QB. Beaty gave an excuse but Gibson double clutched the snap, first hitting his leg/butt and then trying to apparently long snap it but the ball looked to slip out of his hands. Was the QB going to take the snap under center, which happens almost never happens with this offense? Only once in the Baylor game did Beaty make the correct call at 4th and short to have the QB take the snap under center and sneak the ball with a bunch of players pushing the pile (the exact play that Beaty should have called in the TCU game at 3rd and goal that could have impacted the outcome).

This is hyperbole...but I can't help it. Why do other teams seem to always run creative pass routes and have receivers wide open...and the Jayhawks never do.

When you're out-manned...trickery is always your friend.

Keegan, you got it right. Well, maybe about half right. An OC will only fix half the problem. Can't you see the Defense can't tackle. It was right in yesterday's blog " they missed two tackles (in a row)". Hell, I told you plain out, if you throw your body at the runner, you will lose two tackles in 3 attempts. The odds are better if you have a coach that can teach tackling, going up to 9 out of 10 attempts. And it is obvious to you that you can't forecast your game plan. Not even Zenger gets that!

Is $300k+ worth it to a D1 coach's career to just walk around for 2 years in a row? I find it hard to believe that a coach will spend 2 seasons in a row walking around, when there will be other options available in December to actually coach again. I'd guess we'll be looking for an OC out of necessity, though it's a bit hard to imagine recruiting a coach to be a walk-around guy. Not sure even Beaty can sell that.

Beaty made the comment a couple weeks ago that he realized he had been trying to do too much and was going back to the way things had been previously - or something like that. Was it just the ST that he was talking about? I was hoping it meant the OC and all the other positions he had assumed.

The Offensive Coordinator should give his total week's salary back to the football program! I watched the contest from the 50 yard line. KU OC could not get his plays to the team. At one time, BU players sat back and waited for the call to be sent in. His play calling and delays in the game ---BU backers said the OC was delaying the game! Really Bad!