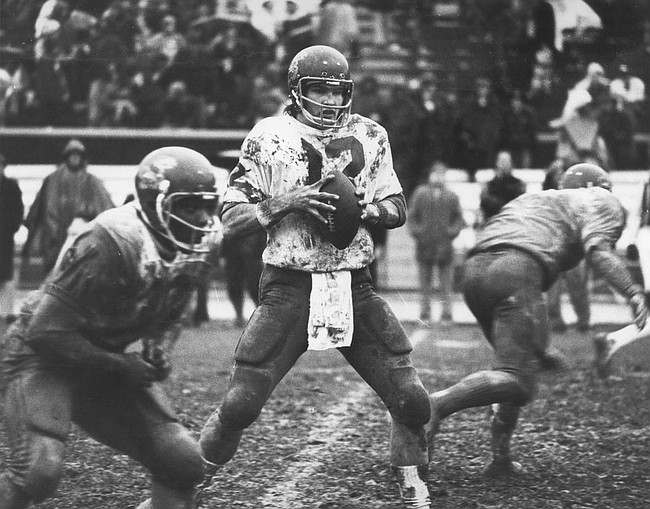 David Jaynes, fourth place in the Heisman voting in 1973

Joe Namath was all the rage in professional football when David Jaynes wore Namath’s long hair and No. 12 for Bonner Springs High.

Like so many quarterbacks from across the country, Jaynes was sure he was going to be the next Namath. What separated Jaynes from the rest of them was that he had a cannon like Namath’s and was being pursued by Super Joe’s college coach, legendary Bear Bryant of the Alabama Crimson Tide.

Jaynes, who lives in Los Angeles with his wife Barbara, was in town for a KU football reunion he organized for former KU coach Pepper Rodgers’ 85th birthday, which coincided with Saturday’s 24-23 loss to TCU.

Terry Donahue, the best football coach in UCLA history, was the Rodgers assistant in charge of recruiting Jaynes and was in Lawrence for the reunion.

“I visited Alabama twice and Bear Bryant came here twice to see me, so Terry was up against a big challenge, had to climb over a big hill,” Jaynes said.

The hill grew steeper when Jaynes signed an SEC letter of intent with Alabama.

“Back in those days, the conference letter of intent was 30 days before the national letter of intent,” Jaynes said. “The letter I signed just bound you to an SEC school, not to other NCAA institutions. Bear Bryant comes up. We had a big signing party, the whole deal. I’m signed. I’m ready to go. I’m going to Alabama.”

Then a few weeks later, Donahue told Jaynes he had an extra ticket to the Kansas-Kansas State basketball game in Allen Fieldhouse.

“I sat on the bleachers by what used to be the equipment room in the southwest corner and it was just as intense then as it is now,” Jaynes said. “I went up to (Donahue) at halftime and said, ‘Coach, I changed my mind. I’m going to go to KU.’ He said, ‘What, you’re kidding?’ I said, ‘No.’ He took me up to coach Rodgers’ office.”

Jaynes recounted the conversation with Rodgers: “Pepper said, ‘Tomorrow morning we have to call coach Bryant.’ I was thinking, ‘Aw, man, I don’t want to do that.’ So the next morning we go up to Pepper’s office and I didn’t know it at the time, but I’m pretty sure Pepper faked calling coach Bryant’s office on a Sunday morning: ‘Oh, coach Bryant’s not there? Well, will you please tell coach Bryant that David Jaynes has changed his mind and he’s going to Kansas.’ I thought OK, great, I’m off the hook. That’s it.’ ”

Freshmen were ineligible at the time and when Jaynes was a sophomore Rodgers was in his first year at UCLA and took Donahue with him. The three men remain close and had a great time swapping stories over the weekend.

Jaynes started three seasons for Don Fambrough, broke a slew of school records and placed fourth in the 1973 Heisman Trophy voting. If he had not injured his shoulder, he might have become the next Joe Namath in the pros.

“By the way, KU’s record when I was being recruited was 1-9,” Jaynes said. “You can recruit here, but you have to work at it. If Terry hadn’t followed up, I would have gone to Alabama and been the greatest third-string quarterback in the history of Alabama football. My point is, when people say you can’t recruit at Kansas, I don’t believe it.”

Now, more than ever, it seems players are pressured by peers, parents and even high school coaches in some cases, to accept the most prestigious offer. But it’s not as if there were a shortage of factors favoring Alabama vs. Kansas back in Jaynes’ day.

“The program was not great,” Jaynes said of Kansas. “Alabama’s facilities were infinitely better than ours at the time. Kansas was 1-9, and it was coach Bryant. Coach Bryant!”

Much has changed in college football since then, but one recruiting advantage at KU’s disposal has not.

“Something about Allen Fieldhouse,” Jaynes said.

One thing hasn't changed, Alabama is still king and KU has only one win.

Great story and I've always believed that KU is a great school, great location, great college town close to major metropolitan area. All it takes is good facilities and a good salesman.

Randy we had the salesman, his name was Mark Mangino. That guy knew how to recruit talent and his teams were fun to watch. KU fires a guy that had you ranked #2 in the nation, went to a BCS game and beat VA Tech in the Orange Bowl. As a fan you thought you at least had a chance

Yet...Mangino was never able to capitalize on that Orange bowl win in recruiting as KU's talent levels began fading after that game.

With all due respect to Mangino, he was not a great recruiter. He was, however, a great developer of the talent he brought in and usually got out of the kids what was in there. Beaty is an excellent recruiter. Let's give him the same amount of time we did Mark to see if he too, can develop the kids he brings in.

We might need to give Beaty more time than Mangino. Mangino had a bowl game his second year and an orange bowl victory in his 7th year. 8th year he went 5-7 and was fired.

Mangino also had the benefit of 4 nonconference games, a very soft Big 12 North, and not playing Texas and Oklahoma in 2003 either. There is no comparison between the ridiculously easy schedule KU had in 2003 and what KU faces on a yearly basis now.

Not disagreeing...that's why I think he needs more than two years. In Jim's email he said give him the same amount of time as Mangino and that was two years to start getting us to bowl games (4 in 8 years).

As I recall from about 40 years ago, Jaynes was the first player drafted by USFL or some start-up league like that. He went to the Chiefs for a short time instead, and I think his first pass in a pre-season game went for a touchdown. Can anyone corroborate that?

Can't believe it was that long ago.