Junior middle blocker Kayla Cheadle played Saturday with “Scooter,” written on her left wrist with a silver Sharpie, and with the man behind the nickname in her heart, thoughts and prayers.

And she never played better.

Starting in place of injured middle blocker Zoe Hill, Cheadle had key blocks and four of her eight kills in the first set, starting the Jayhawks toward a sweep of Texas Tech, 25-8, 25-18, 25-18.

Scott “Scooter” Ward’s title is associate athletics director/academic and career counseling, but his role with KU’s volleyball and men's basketball players runs much deeper than that.

Ward suffered a tear in his aorta Friday morning and underwent surgery after being flown from Lawrence Memorial Hospital to University of Kansas Hospital for surgery.

“He’s fighting for his life and this team thinks the world of him and the things he’s done for us, our program, not only on an acedemic level, but a personal level, and he’s a dear friend of mine," Kansas coach Ray Behcard said." All the energy and effort you saw today is a direct reflection of how we feel about him.” 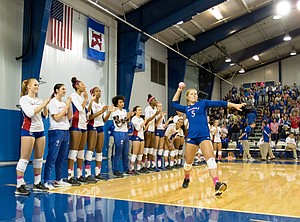 “He’s a big motivation for all of us,” Payne said. “He’s helped us academically and also if we ever need to talk, he’s always willing to talk to us. So when we heard about his situation, we were all really heartbroken, but we played today for him and kind of put his spirit into our game.”

Marchiony, who was with Ward until nearly 11 p.m. Friday night at University of Kansas Hospital in Kansas City, said Ward “had his eyes open some (Saturday) for little bits.”

Marchiony said Ward, who had not regained consciousness as of Saturday morning, had “some infections but nothing they’re particularly worried about,” and added that “doctors are very pleased with the way things are going.”

Marchiony said the KU volleyball team made a video for Ward before their match against Texas Tech on Saturday and his wife, Robin, played it for him in his room.

Friday night, as many as 35 people — most members of Ward’s KU family — were with Robin in the waiting room at one time. That included Ward’s mother who arrived from California around 10:30 p.m. Friday night.

Marchiony said doctors informed them that the initial surgery to repair the tear in Ward’s aorta was expected to take in the five-hour range but only took two.

Ward’s positive spirit has not been dented by a tough break in life. He suffered paralysis and has been confined to wheelchair since a slip-and-slide accident during his freshman year at Hutchinson Community College.

“Scooter’s my biggest supporter, so I wrote his name on my wrist to get me going,” Cheadle said.

Asked what Ward has done for her, Cheadle almost didn’t know where to start.

“So much,” she said. “If I need to talk, I go straight to his office. Obviously, academically too. He’s just a huge part of my life and helps me with everything.”

Cheadle and Payne got Kansas off to a strong start and Madison Rigdon finished off the Red Raiders in a dominant first set with record-breaking serving.

KU scored the final 13 points of the set and 6 of 12 serves from Rigdon were aces. Just like that, she set a Kansas record for aces in a three-set match since college volleyball took up rally scoring in 2001.

Rigdon, who whistled 29 service aces last season, leads the Big 12 with 37 so far.

“She can do that,” Bechard said of Rigdon. “Ask our passers. They pass it up to her in practice.”

It was truly a dominant performance by the KU volleyball team. It was my first game in person and the atmosphere was wonderful. The pep band should be commended for the festive environment. KU was clearly the better team so the match was never in doubt. And most importantly, all who have had the pleasure of meeting and knowing Scott Ward, should keep him in their thoughts and prayers. Finally to Matt Tait, the University of Kansas Hospital is officially in Kansas City, KS.

Indeed it is. Was caught between updates here and from the event at Sprint Center and just got going too fast. Fixed now.

Prayers for Scooter.....one of the most awesome people I have had the pleasure to know.