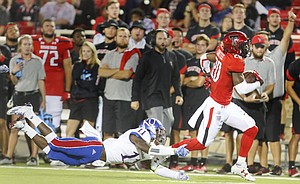 Four--star recruit. Should be a senior in HS. We need more recruits like this.

It appears DB is recruiting these type of players.

Here's a story that I read on JayhawkSlant.com.

Very true. Next year will need to be a big class, because were gonna start to get some turn-over.

Thats all well and good, but can either of those guys play QB?

“Oh, he was terrible...He’s right now making some flash plays here and there. But in the big scheme of things, he understands he gave up quite a few plays in that game that matter. But he’s such a good kid, he works so hard and it’ll come for him. He’s talented.”

If you just read the quote you'd be thinking they were talking about Montell Cozart. Yes, you want "good kids", but I don't understand why a citizenship grade is being assigned when discussing poor performance. Now granted, Mike Lee is a freshman and he was playing against a potent offensive team. But that's all the further the discussion needs to go, except to say that the experience is useful to learn from going forward. On the latter point, I disagree with Fish Smithson's advice to Lee. Rather than saying, "Don't worry about it", he probably should have said instead, "Turn the negative experience into something positive: dwell on it to the point that it drives you to improve. Anything beyond that is not useful to you or the team."

Hadn't heard/seen that Sr - Tevin Shaw was initially beaten on the play.

My guess is that Fish knows he doesn't need to chastise Mike about dwelling on it and learning from it. He's already obviously dwelling on it, and indicated that the 2 are putting in the film time to learn from it and all the rest. Mike challenged himself enough to take the summer school classes to graduate early so he could take collegiate classes and play against Big12 competition. He's got plenty of motivation. Plenty of us would need those comments, and maybe even some of the other players. I'm not worried about Mike Lee needing that sort of motivational speech.