Kansas guard Frank Mason III (0) gets in for a bucket past Long Beach State guard Noah Blackwell (3) during the first half, Tuesday, Nov. 29, 2016 at Allen Fieldhouse.

There are a variety of numbers one could point to while trying to demonstrate just how fast fourth-ranked Kansas played during Tuesday’s 91-61, run-away victory over Long Beach State at Allen Fieldhouse.

But the one that might do the best job of describing it is one that is not often used in basketball circles — miles per hour.

Had the Lawrence Police Department been running radar checks on any one of KU’s lightning-fast guards during Tuesday’s victory, it’s possible the knee-jerk reaction would have been to write them a speeding ticket. 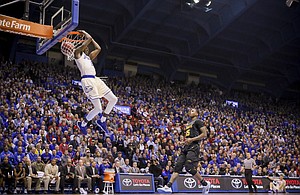 For large portions of KU’s beat-down of Long Beach State, Frank Mason III, Devonte’ Graham, Lagerald Vick and Josh Jackson were seen not as players in crimson and blue, but as blurs wearing white, pushing the ball up the floor in a matter of seconds, with easy transition buckets lighting up the scoreboard and very few dribbles or passes needing to be made to get there.

While overwhelming the 49ers with their speed, skill and strength, the Jayhawks (6-1) shot .596 from the floor and .533 from three-point range while finishing with a 16-4 edge in transition points and 41-24 advantage on the glass.

Here’s the kicker. Both Self and his players believe things could have gone better.

The fact that Mason was the one to point that out, no doubt helped KU coach Bill Self sleep Tuesday night. Because, even while acknowledging that this might be the fastest team he’s coached here at Kansas — Mason said it was the fastest KU team he’s played on — Self said one key element could make this group go faster.

“A lot of it’s on Frank,” Self said. “If we’re gonna play faster, it needs to be on Frank, because as Frank goes, guys will follow. And he was kind of in first gear the entire time tonight.”

First gear for Mason is the equivalent to fourth or fifth gear for a lot of point guards around the country. And that fact was not lost on LBSU coach Dan Monson, who took an unusually long time to get to the post-game press conference because he was likely busy expressing his disappointment to his players.

“Kansas is a great team,” Monson said. “And when you’re a great team and you’re better than the opponent and then you play harder than them, it gets ugly.”

Through the game’s first eight minutes, the 49ers had to feel much better about where they stood than in a few of their previous outings. After falling into recent holes of 16-2 and 30-8 during their treacherous non-conference schedule, LBSU (1-8) trailed Kansas just 14-13 at the 11:43 mark of the first half.

But then the Jayhawks unleashed the greyhounds and never looked back, ripping off a 13-0 run during the next 3:06 to build a 27-13 lead that ballooned to 48-25 by halftime. 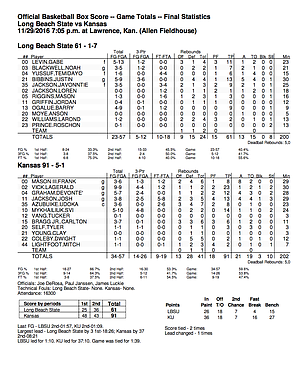 Kansas played from the 20 or more ahead throughout the entire second half, building a lead of as large as 37 points before Self emptied the bench.

Starting for the second game in a row, sophomore Lagerald Vick led all scorers with 23 points and was a big part of that pace that helped Kansas cruise to victory. Both he and Jackson (13 points, 5 rebounds, 4 assists, 3 steals) appeared to play even faster than their straight-line speed because they were so active on the glass, so aggressive on defense and so fast in transition.

“It all starts on the defensive end,” Mason said. “Playing high on the floor, denying passes, running through passes, rebounding the ball, pitching it ahead, finding the open guy; I think the key is getting defensive stops. That’s what we have to do to be able to run. And also rebound the ball so we can get out and pitch it ahead and play fast from there.”

Both Mason and Self said the four-guard lineup used by Kansas for much of the season so far has given the Jayhawks an advantage in the speed department.

“I do think we can play faster, especially when we play four guards,” Self said. “When we won it in ’08, Shady’s (Darrell Arthur’s) your 4-man and he probably was faster than anybody we have. In just a sprint, I don’t know. But we’ve got four ball handlers and we haven’t had four ball handlers out there ever before.”

As for how this team could manage to play even faster than it has to open the season, Graham (12 points, 4 assists, 2 steals in 28 minutes) summed it up with two simple words: Just run.

“Early on, coach was yellin', ‘Run, run, run,’ when we were jogging down the court,” Graham elaborated. “So it looked like we were playing fast, but we could play way faster. Just run.” 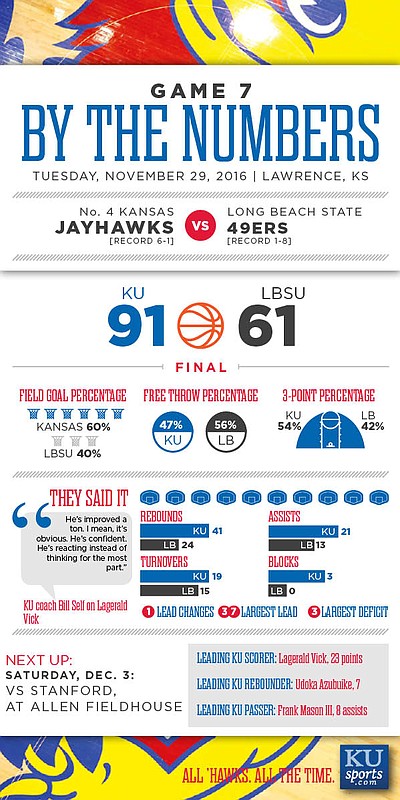 The Jayhawks are becoming more and more fun to watch as the season progresses. Can't wait to see what's in store as we get deeper into things.

Anyone else worried about the free throw shooting?

it bothers me some. I keep thinking, next game, but it still has been not too good.

Jay, I am! Forty-seven per cent is pretty bad and it is becoming the pattern. What are we as a team for the season? I bet it isn't much over 50%.

A little worrisome when you can shoot better from the 3 point arc, on the move, with a hand in your face than from the line.

Could be our "achilles heel". Wouldn't be the first time FT shooting cost us an NCAA championship.

I agree Jay. We have to get better at the line. Hopefully they can get back on track before we get to the end of the non-conference games and before the start of Big 12 play! (which crazily is a month from today at TCU...wow)

LBSU: I've grown spoiled thinking Mason was gonna drop another 20 last night. He only scored 8 points but he played a great game. He rebounded and got others involved.

He did pass Jerod Haase (1264 points) on the All Time-Scoring list last night for 1269 career points. He sits 12 behind Eric Chenowith and 16 behind The Great Jo Jo White.

Yes, it worries me, what worries me most is the guys with the most trips to the line and the ones that likely will make the most trips to the line are not shooting well at all. AZ was only 2/6 for the night and is only shooting .333 for the season, Jackson was 5/8 and is .541 on the season. These are two guys that are going to see a fair amount of playing time and need to get their percentages up. Mason, Graham, Vick, and Brag are the other players on the team with a fair number of free throw attempts and they are all shooting above .700, but they didn't make many trips to the line against LBSU.

Yeah, AZ unfortunately becomes a liability in crunch time. Will Self be able to leave him on the floor in close games (in which KU leads) due to the hack-a-shaq technique?

I haven't seen many (any?) college coaches employ such a tactic, but I'm sure it's coming. Is the rule any different in college versus the pros? Could college coaches use the hack-a-shaq technique? (Looking for some help.)

The only knocks coming in for Jackson were his outside shooting and free throw shooting. He looks so comfortable and confident during the game flow. We will see about the FT's. Udoka will probably get better but it makes me think about Charles Barkley's golf swing. We had trouble last year at times with the front end of one and ones and were told it's just a matter of concentration. Alot of things to work on but our guards have been amazing.

Of course, Jo Jo did his work in three years instead of four, but that certainly doesn't take away from the great career that Frank has had. He will always be one of my all-time favorites.

As for Jo Jo, anyone have an update on his health? I know that he had some serious issues in the not too distant past. In my book, he is still the best guard KU has ever had, although KU surely has had a lot of good ones.

I did not know about his health issues Harlan. I recall, as a kid, watching some great shot by Jo Jo on a black and white tv back in Kansas. I think it was a championship type game and it was from way out, but they called it off saying he stepped out of bounds.

Barry, I assume you're talking about the Elite 8 game against Texas Western (now UTEP). That's one of the most heartbreaking moments in KU history, as that team would have had a great chance to win the championship. I'm too young to have seen the moment but I'm well aware of the history. Just one of many such heartbreakers in KU's B-ball history; has any other team had as many?

Yes, that sounds right, thanks Len.