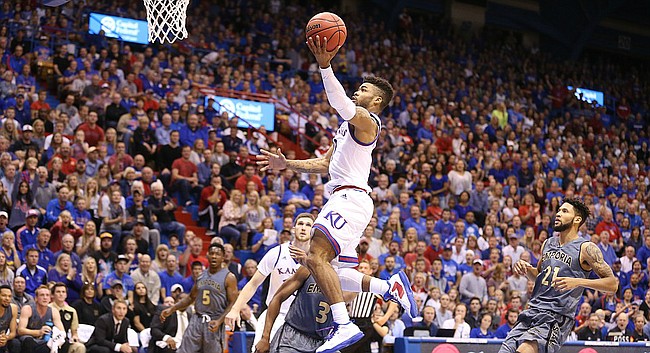 Kansas guard Frank Mason III (0) pulls up for a layup against Emporia State during the first half, Sunday, Nov. 6, 2016 at Allen Fieldhouse.

In their last outing, the Jayhawks played nearly 30 minutes of a 2-3 zone defense that they had worked on in practice for a total of 5-10 minutes all season.

Switching to the zone was a survival method and an incredibly intelligent move by KU coach Bill Self, who watched the zone completely fluster the cold-shooting Bulldogs Tuesday night at Sprint Center. But just because the zone worked so well does not mean the Jayhawks are going to make it a regular part of their approach.

For one, multiple players after the game mentioned that they take great pride in playing tough, man-to-man defense and don’t like the feeling of having to switch out of it to play zone. For two, Self has never been the kind of coach to use the crutch of zone defenses to bail out his teams. Instead, he preaches to them the importance of guarding the ball and making it a personal thing — either you guard you man or you get punked.

With that in mind, expect the Jayhawks to come out with great intensity and defensive focus in this one, both to prove to themselves and their head coach that they’re a team capable of playing the kind of lockdown man defense we heard about all preseason.

Self has talked plenty already about wanting to find a way to give Frank Mason III and Devonte’ Graham more rest than a couple of minutes per game — if that — in order to keep those two fresh and also help speed up the development, confidence and impact of the reserves playing behind them.

And one of these games it’s going to happen. Common sense suggests there will be a time when Mason or Graham are only asked to play 28-30 minutes instead of nearly going the full 40.

Or will there? Self said after the Georgia victory on Tuesday night that as much as he’d love to sit his two top guards for longer spells of each game, the poor play of his big men has made that next to impossible thus far. “I don’t want him to play 35 minutes,” Self said of Mason. “But if you have to play four guards all the time then he and Devonte’ are gonna have to play 35 minutes. But that hasn’t been our intent going into the season at all, so that could change.”

UNC Asheville is not a good shooting team, as just three members of the Bulldogs’ regular rotation are above 50 percent for the year and three other rotation guys are below 40 percent.

That has forced Asheville’s players to scrap for extra possessions to stay in games. Even though the Bulldogs have been out-rebounded by an average of seven boards per game so far, they have performed much better on the offensive glass, playing nearly even in that category through the first five games.

With Kansas struggling to keep its bigs on the floor, the opportunity for Asheville to crash the glass could be there. That elevates the importance of the rebounding efforts of players like Jackson, Vick and, of course, Graham and Mason.

If the KU big men can stay on the floor, though, that would go a long way toward taking the rebounding category out of the equation altogether. Asheville’s season-high of 33 rebounds came earlier this week while KU has not been below 38 rebounds in a game this season.

And, no, Asheville’s number is not low because of terrific field goal percentages. The Bulldogs enter tonight shooting just .445 from the floor and are holding opponents to .466 shooting.

Playing just the fifth game of his college career, the 6-foot-3, 185-pound Teague exploded for a career-high 22 points on 7-of-16 shooting, including 4-of-9 from three-point range, to help the Bulldogs get by Furman on Tuesday night. Riding that kind of confidence and getting the opportunity to play in a venue like Allen Fieldhouse, the freshman from Cincinnati seems to be set up for a feast-or-famine type of night when he faces the Jayhawks. Assuming Graham draws the defensive assignment, Teague will be staring at a night of famine if the Kansas junior plays the kind of suffocating defense he played on Georgia star J.J. Frazier on Tuesday night. Frazier entered that game averaging 19 points per game but was limited to just two on 1-of-10 shooting in 33 minutes. Teague enters tonight’s game as the Bulldogs’ second leading scorer (14.8 ppg) and shooting .440 from behind the three-point line.

With their big men struggling and their guards living up to the billing of best backcourt in the nation, the Jayhawks are, at least at the moment, a bit of a one-dimensional team.

Now, that one dimension has many parts that make it effective, from getting to the basket and shooting from distance to creating opportunities with defense and setting up teammates for easy buckets, KU’s trio of Mason, Graham and freshman Josh Jackson are and certainly have been enough to push the Jayhawks past just about any opponent.

But that can’t and won’t last. And now is the time that the Jayhawks need to find out how to get their big guys back into the flow so they will be there when this team needs them in Big 12 play and beyond.

Self and his perimeter players remain optimistic that the issues currently plaguing starting forwards Landen Lucas and Carlton Bragg Jr., are temporary and can be worked through with things like effort and intensity and heart.

The stats may suggest otherwise, though, as that duo has produced little more than a high foul count during the past couple of outings and Self already may have reached the point where he’s not going to waste much time letting them play through their struggles and instead quickly will turn to reserve guards Lagerald Vick and Sviatoslav Mykhailiuk and employ the much-talked-about four-guard lineup that has worked well for the Jayhawks thus far.