Kansas forward Carlton Bragg Jr. (15) finishes a dunk off a lob from teammate Devonte' Graham during the second half of the CBE Classic on Monday, Nov. 21, 2016 at Sprint Center.

Because of its 83-63 victory over UAB on Monday night, the Kansas men’s basketball team at 9 p.m. tonight will take on Georgia, an 81-73 winner over George Washington in the early game at Sprint Center.

The Bulldogs (3-1) trailed by one at halftime but outscored GW 46-37 in the second half to advance to Tuesday’s title tilt. 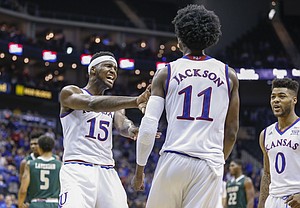 KU leads the all-time series with Georgia, 3-0, with the most recent victory coming at the Great Alaska Shootout in 1999. Georgia coach Mark Fox, however, has tasted success against the Jayhawks during his career.

In December of 2005, Fox led Nevada into Allen Fieldhouse and handed KU coach Bill Self just the third home loss of his career to that point. 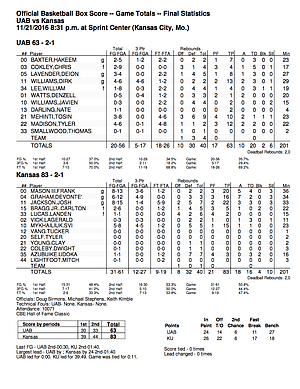 “I am a graduate of the University of Kansas so I obviously (was) rooting for Kansas (against UAB),” Fox said. “The only time I don’t is when they’re playing our team.... Kansas is the benchmark for great basketball. There’s KU and there’s UK and they’re both blue and they’re both terrific. But I have the utmost respect for the history and tradition of Kansas basketball, because I grew up watching it.”

KU’s inclusion in this year’s CBE Hall of Fame Classic marks the third time the Jayhawks have played in this event and first since winning it in 2012.

Kansas is 8-1 all-time in the CBE Classic, with a 5-0 record in host contests at Allen Fieldhouse and 3-1 record in bracket play at Sprint Center. KU’s lone loss in bracket play came in 2008, when the Jayhawks lost to Syracuse, 89-81, in overtime.

Originally called the Guardians Classic, the event started in 2001 with the championship rounds played in Kansas City at either Kemper Arena or Sprint Center.

A win over No. 1 Duke and a 21-point victory over Siena in the home opener was good enough to bump the Kansas men's basketball team back into the Top 5 in the AP Poll.

KU's inclusion in this week's AP Poll marks the 144th consecutive poll in which Kansas has been in the Top 25. That streak dates back to the 2008-09 season and is the longest active streak in NCAA Division I.

For the first of what could be several times this season, Kansas freshman Josh Jackson on Monday was named the Big 12 Conference's Newcomer of the Week for his play in victories over Duke and Siena.

Jackson, a 6-foot-8 guard from Detroit by way of Prolific Prep in Napa, California, shot 12-of-15 from the floor and hit double digits in scoring in both games despite dealing with foul trouble each time out.

Jackson fouled out of the Duke game and picked up four fouls against Siena. The nine fouls in those two games limited his minutes to just 39 total in the two games but did not limit Jackson's impact in either game.

• — • For a preview of what to expect in tonight's match-up, join our Gameday Chat with Matt Tait to talk KU-Georgia. Submit questions early or join the live chat at 2 p.m. central time. • — • 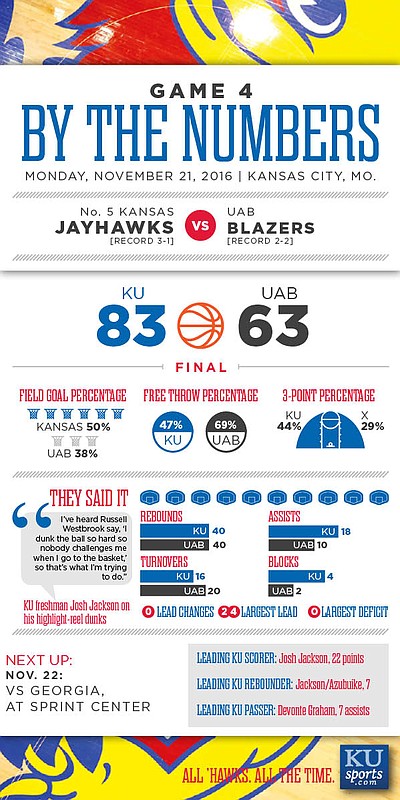 Mason v Frasier should be a great match up! Man we got to get our FT's to drop. 44% on 3 pointers was nice.

Might be a good test for us as Georgia is strong and physical down low, where our bigs have struggled. Frasier is very capable, but so is Frank.