For the third consecutive game to open his senior season, KU forward Landen Lucas spent more time laboring and less time on the floor than he did during the final stretch of his sensational junior season, when he proved to be an indespensable part of KU’s Elite Eight team.

Players struggle. Slumps come and go. Seasons change and roles change with them. KU coach Bill Self can accept all of that. What he can’t accept is what Lucas (six points, five rebounds, five blocks in 21 minutes) is doing when things don’t go his way on the floor.

“He’s a fifth-year senior and he stops to question an official twice, back-to-back, when the other team has the ball. That’s ridiculous,” Self said following his team’s 86-65 win over Siena at Allen Fieldhouse.

Lucas has battled a sore foot throughout the early portion of the 2016-17 season, but every time Self has been asked about it, he has divulged that he believes Lucas is fine, physically. So what could be the factor that has kept Lucas from looking like his old self so far this season? Self had an answer for that, as well. 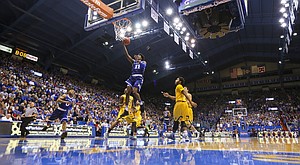 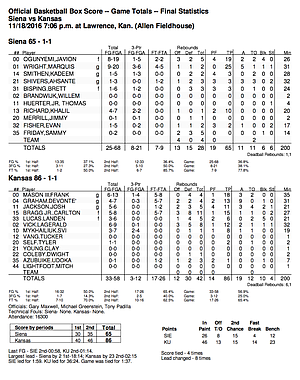 “I think a lot of that is being tired. I think a lot of it is just fatigue,” he said. “I think if he would just play to who he is, I think he’s a better player than he was last year on who he is. But when he gets outside of that and tries to do some things.... You know, offensively, he should know what his go-to moves are as opposed to playing to what (are) not his go-to moves. He can tighten that up. I think he’ll get better moving forward with that.”

His 15 points and 11 rebounds both were career-highs and they came, according to Bragg himself, as a result of him thinking less and acting more.

“It felt good to be back, staying aggressive and just playing my game,” Bragg said after the victory. “I just have to keep going.”

Bragg’s points came in a variety of ways, but offense had not been his biggest issue thus far. Rebounding and playing down low had, and Self said he was proud of the way Bragg approached Friday’s game.

“He played like a big man,” Self said. “Played inside-out.”

Bragg plans to keep his roll going from here and knows exactly the way he’s going to do it.

“My focus is just rebounding and helping the team out,” he said.

After another recent scary moment left KU academic advisor Scott “Scooter” Ward hospitalized and trying to recover from heart issues that put him in the hospital in the first place, Self provided an update on Ward’s condition, complete with a bit of humor coming from his Kansas City hospital room.

“Certainly, he’s going through a tough deal,” Self said. “I told people the other day, he texted me. He said, ‘Good gosh, you guys had a 12-point lead, you about gave me a heart attack.’ He’s had two unbelievable things that have happened. We’re very fortunate that he got the attention when he did. He’s had two surgeries (on his aorta) and they had to crack his sternum open both times. He’s going through a tough time right now, but he’s tough as nails and I know he knows he’s loved and we miss him around here.”

Senior guard Frank Mason III led the Jayhawks in scoring for the third consecutive game and now is averaging 23 points per game this season.... The Jayhawks wore the all-blue, alternate uniforms they wore to honor Veteran's Day and Pearl Harbor in Honolulu because of a decision that was made three months ago. The superstitious Self said he was not thrilled about wearing the same uniforms KU donned in its season-opening loss to Indiana, but did not protest.... KU now has started 2-1 for the 13th time in the 14-year Bill Self era.... KU’s victory extended its winning streak at Allen Fieldhouse to 41 games and gave Kansas an NCAA-leading, 43-game home court winning streak when counting games played at Sprint Center.... KU is now 745-109 all-time in Allen Fieldhouse, with 207 of those wins and just nine of those losses belonging to Self, who improved his KU record to 387-84 all-time. 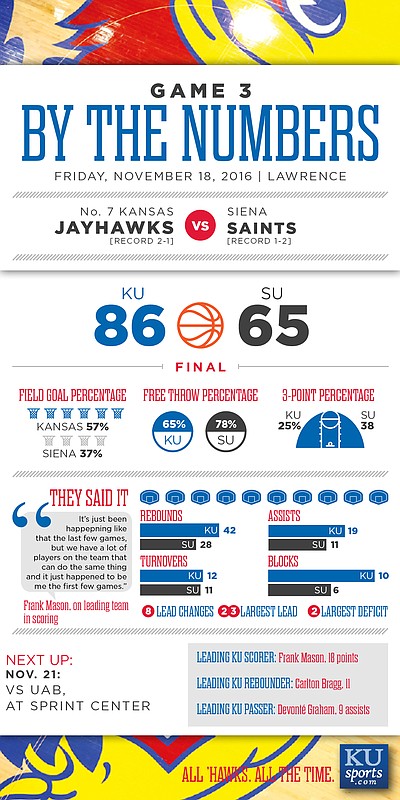 I'm glad coach is pushing Landon. I'm not sure how he could be fatigued only 3 games into the year unless he's just not in shape. Actually I thought he played better last night than normal. He's sort of at his limit I think. 6 points per game, 6 rebounds, that's about what he does. I just get frustrated when he has the ball under the basket. Unless its a transition pass to him at the rim that he can dunk, its pretty iffy once he puts it on the floor. The ball will usually be stripped or he just misses. He would be a great back up. I'd try to get Udoka up to speed and fast! Anyway, nice win Jayhawks….and let's get those FT's and 3 pointers to fall.

I don't worry about big Luke. Despite his slow start he'll contribute plenty as the season progresses. Dok has a long way to go but he's coming on fast and should provide valuable minutes as he gains experience...but let's not get carried away...he's barely 17 yrs old.

The guy that could give the Hawks an unexpected bonus in the front court is Coleby. He's big and experienced and could offer a pleasant surprise when he gains confidence in his repaired knee.

Does anyone remember last year when Devonte Graham had a slow start and there were people on this board who were yelling for him to be benched? I think Lucas will be jus fine.

I'm tired of hearing Landon will be just fine, he will progress, don't worry about him-talk. He is a post-senior, there's no excuses for him not to perform on the floor at this point. He's reached his potentials, enough already. It's time to grow those with more potentials. These are athletes, 16 yrs old, 17 yrs old, they're not too young (hint: UK). Bench the youngsters, pamper them, until they are old enough, strong enough, blah blah blah.

I'll stick with the approach of a coach that has produced an average of 30 wins per year and sent a slew of players to the professional ranks...and I certainly don't need any suggestion about mimicking Kentucky.

There are very few Anthony Davis type players and other than Joel Embiid, I haven't seen anyone that close. But still, Landon Lucas is a fifth year senior who seems to have regressed. I was hoping he would be a positive influence on Azubuike especially as we get ready for basketball in March. I've been very much impressed by how well Azubuike is playing already and I'm willing to bet that Lucas and Bragg have both contributed to his play...but I'm ready to see the Lucas who played last March. Not many excuses for him to not be that player.

That's surprising that as good as Self's record is, we've only started 3-0 once with him as our coach? I guess several of those are from the Champions Classic....

That's what happens when you consistently play one of the most competitive schedules year after year. Losing in November is not nearly as important as losing in March.

Am I the only fan who would like to see Self hire a coach to teach these players how to shoot free throws? If Azubuike is in the game late with the outcome very much in question, the opposing coach would be foolish to even let Azubuike even get a shot off. Also, if this free-throw shooting was limited to Azubuike, you might get away with it but for some reason there have been few Kansas teams that have excelled at the line.

I'm not just talking about Self but other teams as well. I just think that something so critical needs to be dealt with. Ask the 2002/03 Williams led basketball team that lost to Syracuse. I'm not sure how many times I heard about how Carmelo led the way to victory when we made 12 of 30 free throws and lost by three points. We shot 30 free throws and made 12 - that is the reason we lost. I hate to see that happen ever again.