Jayhawks struggle to shoot in 75-63 loss to SMU

With one minute left in the first quarter, Kansas coach Brandon Schneider called the play “fist” as his team brought the ball up the court.

Moments later, SMU coach Travis Mays called the play out to his team, directed his defenders to exactly where the play was supposed to go, and it resulted in Kansas junior McKenzie Calvert getting her shot blocked.

“It doesn’t really make anything much harder,” Washington said, “we just stick to what we do, run our offense, and trust that whatever coach calls is going to work. We know that they are going to scout us and we are scouting them too, it's just part of the game.” 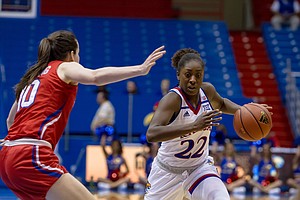 Mays said he knew that the strength of the Jayhawks is guard play and he made it a point not allow them to get going from beyond the arc or driving the ball.

Kansas had its shot blocked 10 times and though Calvert and Washington both scored effectively (17 and 13 points, respectively), they were a combined 9-of-31 from the field.

“For us to have success,” Schneider said, “we’re going to have to distribute shots more evenly and get three or four people in double figures and get off to better starts.”

Kansas started slow out of the gate, allowing SMU (2-0) to open the game on a 15-0 run. The Jayhawks didn’t score until junior Chayla Cheadle made a layup almost five minutes into the first quarter.

“I thought in this game,” Schneider said, “our offense and shots not going down affected our defense.”

Even with the big lead, Mays said he knew that the Jayhawks weren’t going to fold. Kansas trailed, 73-50, with 5:36 remaining, and Schneider inserted five bench players and decided to use a full-court press.

From that time until the end of the game, Kansas forced turnovers, hit three shots from beyond the arc and went on a 13-2 run. Schneider called the quarter “the best quarter of the game,” from the Jayhawks, pointed to the ball touching the paint more on offense and the full-court pressure on defense.

Schneider said he’s a little hesitant to employ the full-court press for an entire game, but he's a fan of the Jayhawks’ athleticism.

“With the way the rules are now, you’re always a little nervous to play that way with touch fouls 90 feet from the basket,” Schneider said. “But I’ve always liked to play that way, and I do think we have the personnel to do it more.”

Kansas will look to bounce back at Memphis at 2 p.m. on Sunday.