Kansas junior forward Lois Heuchan slides to the turf after scoring the game-winning goal against Missouri in the first round of the NCAA Tournament on Sunday, Nov. 13, 2016 at Rock Chalk Park. Senior Hanna Kallmaier (23) pumps her fist in the background.

When junior Lois Heuchan fell to the turf and awaited her teammates, tears of joy flooded down her face. As the rest of the Kansas soccer team swarmed in, Heuchan disappeared under the dog pile at the top of the 18-yard box.

Heuchan’s mobbing came in the moments after the forward sunk the game’s only goal. It came just 40 seconds into the second overtime period, clinching the 1-0 victory over Missouri at Rock Chalk Park in the first round of the NCAA tournament.

“(I was) just thinking about all the work we put in this year,” Heuchan said. “We all came in this summer and worked hard. Sometimes you wonder if it’s worth it and then days like today make it definitely worth it.” 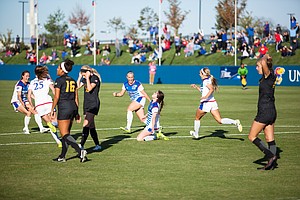 And yet, while Heuchan emerged unharmed from being trampled by teammates, her coach, Mark Francis, hurt himself as he jumped for joy on the sideline.

“I think I pulled my calf, I jumped so high,” Francis said. “I’m not kidding. I’m happy for our players. Especially for our seniors. This senior class has helped us establish the culture that we now have. I’m really excited for them that they get to keep playing.”

The first-round slugfest was just the latest installment of a Kansas-Missouri rivalry that has been nearly put to bed. In fact, it marked just the fourth meeting between the two schools in any sport since 2011.

But at least for one day, the once historic collegiate clash was back on full display in Sunday’s double-overtime thriller.

“That was a hard-fought game and we knew it was going to be,” Missouri coach Bryan Blitz said. “In my 21 years here, this is the grittiest Kansas team that we have seen.”

For 100 minutes of action neither team budged on the defensive end. Both teams took their fair share of good looks offensively.

The Jayhawks held the early advantage in shots attempted with seven compared to the Tigers’ five in the first period. However, Missouri controlled much of the possession and had a number of much better looks.

But it was the play of redshirt freshman goalkeeper Regan Gibbs that helped keep a zero on the scoreboard. With junior Maddie Dobyns — the team’s usual goalkeeper — sidelined with an injury, Gibbs had a tall task in her fifth match of the year.

“I can’t say enough about the kid of how she handled that situation,” Francis said. “That’s not an easy situation to get thrown into, especially against a team like Missouri. That just completely blew me away.”

Gibbs notched three saves on the afternoon, including a key stop within the early minutes. Missouri, which led the SEC in shots per game with 19, attempted 14 against the Kansas defense.

Perhaps most importantly was the team’s play on Sarah Leubbert, SEC Freshman of the Year. She attempted just two shots, including one on goal, after scoring 10 goals this season.

The defensive play helped keep the Jayhawks alive until Heuchan was able to save the day in the 101st minute.

After going scoreless through the first two periods as well as the first overtime on 16 shot attempts, Kansas needed just one look in the final overtime period.

Sophomore Grace Hagan crossed a pass over in front of the net, where Heuchan was able to strike the ball into the top right corner of the net. The ball soared past the diving Missouri goalkeeper Kelsey Dossey and the ensuing celebration began.

“Grace picked me up, (that was) such a good ball,” Heuchan said. “I just found the back of the net.”

With Heuchan finding the back of the net, the Jayhawks advance to the second round of the NCAA tournament and will travel to Chapel Hill for a matchup with North Carolina at 5 p.m. Friday.

A beautiful thing to watch. Great day. Great play. Great crowd. Mizzou loses. All is right with the world.

Sure makes up for the abysmal play of the women's basketball team.

Congratulations to the lady Jayhawks. Now on to UNC. Go, fight, win.