Kansas guard Josh Jackson (11) is smothered under the net by Indiana guard Josh Newkirk (2) and Indiana forward OG Anunoby (3) during the second half of the Armed Forces Classic at Stan Sheriff Center, on Friday, Nov. 11, 2016 in Honolulu, Hawaii.

No one in attendance at Hawaii’s Stan Sheriff Center Friday night would ever have guessed that, even if Kansas’ 103-99 loss in the Armed Forces Classic more often resembled a college football game than the regular season opener for two college basketball bluebloods.

Maybe it was the nostalgia and pride of playing in front of so many men and women of the military on Veteran’s Day or the unfathomable idea of opening the season they’ve been waiting so long to tip off with a loss. Either way, when the game began, KU and Indiana were sporting clean and crisp bright red and blue alternate uniforms to honor the occasion. By game’s end, the two teams basically were wearing the same color — sweat.

After 45 grueling minutes, 17 lead changes and the not-so-sweet sound of referee whistles that led to 63 fouls, it was the Hoosiers who left Honolulu with an unblemished record.

"You come all the way over here and you play 45 minutes, you gotta win," KU coach Bill Self said. "And the bottom line is we just didn't do it." 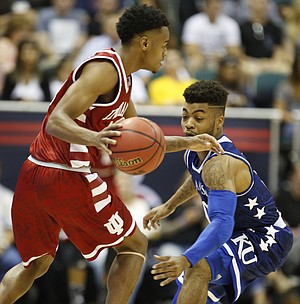 View a photo gallery from the Jayhawks' season opener against Indiana as part of the Armed Forces Classic in Honolulu. 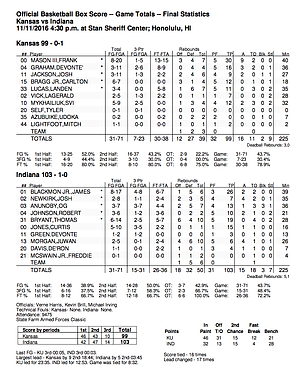 After a couple of miscues and bad breaks, Kansas looked dead in the water with 1:08 to play, when Indiana led by five and went to the free-throw line looking to push the lead to three possessions.

Instead, the Hoosiers missed both free throws and Frank Mason (30 points, 9 assists, 7 rebounds) slipped into his Superman cape to help force overtime. Less than 30 seconds later, after two killer Mason drives to the rim, the game was tied at 87.

"He missed one big one (in overtime), but other than that he was great," Self said of Mason. "Frank's so tough."

Indiana got back to the free-throw line on the very next possession, however, when Devonte’ Graham (16 points) fouled out and spent several minutes battling cramps in the corner before heading to the bench. From there, Mason, as he’s been known to do, coolly connected on a pair of free throws with 2.3 seconds to play to force the extra period.

No. 3-ranked Kansas fell behind by six in the overtime period, but even that failed to knock the Jayhawks out. After a few more free throws and clutch plays by Mason, Kansas forced two misses by the Hoosiers in the final minute before fouling on a third attempt. Freshman forward De’Ron Davis calmly drilled two free throws to give IU a 99-95 lead and keep KU’s comeback bid at arm’s length.

So many things factored into the frantic season opener and one was KU's need to rush out the door in order to catch it's flight to New York.

"If we'd have been down two late, we would've shot a three or we would've missed our flight," Self joked. "We would've either won it or lost it."

A lot of the talk leading up to Friday’s showdown was how Self’s Jayhawks would match-up with No. 11 Indiana’s fast and frenetic smaller lineup.

And after talking all week about going small and playing more four-guard lineups, it was the Kansas big men who made the biggest impact early.

Kansas opened the game by forcing Indiana to play its pace. The Jayhawks played strong, aggressive defense throughout the first five minutes — Josh Jackson forced a tie-up on the game’s first possession — and completely kept the Hoosiers off of the offensive glass.

Indiana opened the game 2-of-6 from the floor, with the two makes coming on three-pointers from 6-foot-10, 255-pound center Thomas Bryant, who made just five (in 15 attempts) during his stellar freshman season.

The Hoosiers took their first lead at 12-9 midway through the first half on a three-pointer by freshman Curtis Jones. IU scored its first 12 points on three-point baskets and hit 6-of-16 from downtown in the first half.

After slugging it out for 10 minutes and watching Indiana pick up its intensity on the glass, Kansas trailed 33-29 but responded with an 11-0 run that forced the Hoosiers to call timeout.

Mason scored four points and assisted on another bucket during the run and Landen Lucas and Carlton Bragg each picked up easy points at the rim — Bragg’s coming in that scrap-and-grind manner after a missed transition lob by Udoka Azubuike with 3:13 to play in the first half.

That run carried the Jayhawks to a 46-42 halftime lead and set the stage for a second half that closely resembled the first, with both teams going back-and-forth and battling through sloppy plays and lead changes. KU opened the final 20 minutes with a quick 5-0 run that built the game’s largest lead (51-42) but Indiana responded with back-to-back three-pointers to pull right back into it.

With foul trouble plaguing KU’s starters, Self pieced together enough timely substitutions to keep the Hoosiers at bay and showed that, even in his 14th season at Kansas, he’s still got the magic touch of dialing up perfectly executed out of bounds plays following timeouts.

Two such plays — a lob to Lucas and another to Lagerald Vick on the next possession — played a huge role in helping Kansas keep the lead. The lob to Vick put the Jayhawks up 63-60 after trailing 60-59 less than a minute earlier. Graham followed with a three-point play to push KU’s lead to 66-60, however, in this one, no lead was safe or comfortable and 2:30 later the Jayhawks once again trailed, 68-66, with 9:09 to play.

Despite leading for 23:35 of a possible 45 minutes — IU led for just 12:53 — the Jayhawks (0-1) played most of the second half and overtime from behind and just never could get over the hump, with foul trouble and turnovers making the final surge difficult.

Of course, Indiana’s red-hot hand from the outside did not help. The Hoosiers hit 15 of 31 three-point shots (48.4 percent), including back-to-back daggers late in overtime.

"We didn't defend it great," Self said of the three-point shot. "But we didn't count on Thomas Bryant making the first two of the game."

Kansas will get just three days to recover before facing what figures to be an even tougher challenge in No. 1 Duke at the Champions Classic on Tuesday in New York City. 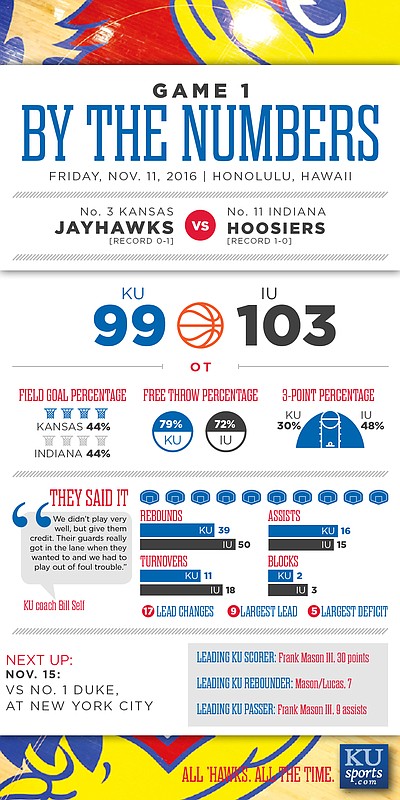 — See what people were saying about KU's matchup against Indiana during KUsports.com’s live coverage.

More news and notes from the loss against Indiana

Indiana wanted it more than us, and had more energy.

KU will be very good this season, probably win the Big 12 title, but unfortunately will not be great.

I think we are overthinking this. This is the first game of the season, against veterans. Take a deep breath, and step back from the ledge. :)

They are no More a Veteran Team than we are.

And KU isn't a veteran team? Plus Indiana had just lost a key frontcourt player. Getting off to a slow start this season will likely leave us 0-2.

We will in the BIG 12 and maybe the Conference Tournament but anything past that will require this group to be more than just the sum of it's parts.

The 5 position was our weakness last year and it will be again. It does not take much to see that. Granted Lucas is hurting, but that is the weakness we must find a way to work around. We were destroyed on the boards.

Cut the hair. Everybody.

And Bill, hit the gym brutha.

Bill is beginning to look like me. He needs to get @A_Hudy to work him over on a regular basis.

Glad to see that I was not the only one that thought Bill didn't look very healthy. Between a newly formed paunch and what looked like an unhealthy pallor when he was interviewed at halftime made me pretty concerned about his overall health. Then again, the guy has a huge amount of pressure on him every day, so perhaps that is all it is.

Mr Beakum ...what is your reason you feel the players should cut their hair?. Just asking kind sir.....

I thought the zebras were terrible. The missed shot clock violation. Calling fouls when none existed and swallowing the whistle on others. The only consistency to their calls was the inconsistency.

Absolutely..but they didn't hit 15 threes against us.

On a totally different angle, my wife and I found those uniform colors to be just close enough to often make us look closely to see which team has the ball. Maybe later in the season our recognition of our players will be easier. I am somewhat color blind and although I could tell the red from the blue they were just close enough I really struggled with that. I sure hope they don't repeat this idea in the future. We were watching on TV, not in person.

If we hadn't made four more free throws thand IU we could have been blown out. The number of extra rebounds rewarded IU with a lot more three point attempts than us.
We missed our Three's! We were out rebounded! And, our Big Men didn't intimidate or alter the shot. We only had two blocked shots.

Lucas and Bragg had better get it together and our shooting from outside needs to be in the 40 percentile range if your not going to stop the junk. Let's hope Bragg gets better quick, if not Az will need to get into shape for conference play. I actually liked what I saw when Az was in the game but needs time.

I liked what I saw out of Az too. Ya he's raw, but at least he can block shots and create problems for anyone taking it to the rim. I'd like to ramp up his minutes a lot.

Need to develop our bigs fast. We won't beat too many good teams this way.

If you know of anyway to speed up Lucas's development..please call HCBS.

I get your point. Landon just is what he is, no more upside. Dang I wish he could elevate and block shots and above all, once he gets in in the paint, don't put it on the floor, just jam that sucka!

Truth is - bigs often take more time to develop. Going back through the Self years, most bigs hit their stride in the 3rd year.

Lucas is about as good as he is going to get.

Here we go again .........There seems to be this panic again over Lucas .Lets let the season play out . If I remember at the beginning of last season there were a lot of fans throwing Lucas under the bus ....that he couldn't score that he was a defensive liability not a rim protector ,SOMEONE POSTED HE SHOULD BE BURIED AT THE END OF THE BENCH !! Have we forgotten his true value to tis team , some seem now to question his talents again . He is not Joel Embiid but he is not a spare part on this team either Let us not judge him so quickly and let the season play out .

I didn't question his talent. Lucas is a fifth year senior who probably reached his ceiling near the end of last year when he did a decent job and provided experience to the team. His footwork is far better than when he started but he still doesn't go hard to the rim. I'm not down on Lucas, he just isn't nearly as aggressive as he could be.