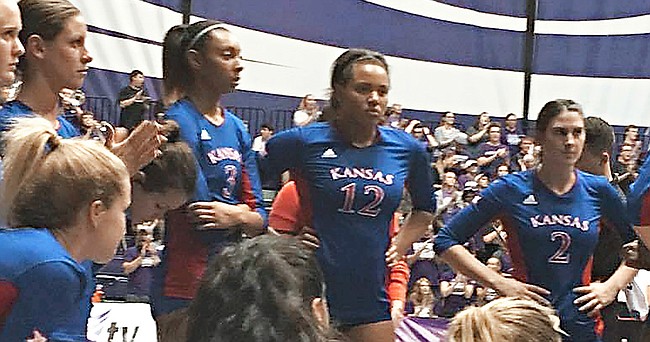 Manhattan — Win out and grab at least a share of the school’s first Big 12 volleyball title. That has become the battle cry of a Kansas team that made its first Final Four last fall and is looking to make more history.

The battle cry still applies, but the Jayhawks had to sweat out a five-set victory Wednesday night in old Ahearn Field House, a mixture of modern seating, musty charm and hot, stuffy air.

“That was good old-fashion, hey, let’s turn up the heat, get a bunch of people in here, sweat it out and play for a couple of hours,” Kansas coach Ray Bechard said.

KU (21-2, 10-1, tied for first with Texas in the Big 12) came out in the fifth set on fire, taking a 9-2 lead, but in keeping with the theme of the night in that neither team died easily in any of the sets, Kansas State stormed back into contention.

In the eyes of some, making too much of the chance at a conference title might put too much pressure on a team, but nobody on the Jayhawks looks at it that way.

Cassie Wait had 33 digs, including three in one fourth-set rally, two of the super-athletic variety. She explained why the players like keeping the conference-title talk going.

“It’s a lot like playing the game of volleyball,” Wait said. “You can’t play not to lose. We have to talk about it. We have to be the aggressors day in and day out, and if we can look at each match like that, look at each point like that, it’s going to carry over.”

K-State had a raucous crowd, students expertly timing their noise-making antics, such as slamming seats, with KU’s hits, but the Jayhawks, winners of nine consecutive matches, kept plugging away.

Kansas fell behind 10-4 in the second set and battled back to take the match into extra points. K-State was declared the winner when it won a challenge on a shot that originally was ruled out.

Kansas bounced back to win the third set, and in the fourth set battled from behind to tie the score, 20-20. K-State took command from there, scoring five of the final six points.

“Kelsie got a lot of kills at the right time and I was really proud of Jada Burse, 13 kills, 37 swings, that’s high volume for her,” Bechard said.

Wait summed up the night well in saying, “Some really long rallies, just a battle of wits.”

Kansas has five matches remaining on the Big 12 schedule, five more chances to keep the battle cry alive, the next coming on a road trip to Norman for an 8 p.m. first serve Saturday.

"K-State had a raucous crowd."

Another way that could have been written was. "K-State had a bunch of annoying dorks in the stands."

Great win considering the emotion that happened Saturday night. After all Kstate had a higher RPI(once again proving that RPI in any sport is worthless).

Well I wouldn't say "worthless", but I agree with you in the sense that there are better performance indecis.

Time to get Keegan an upgrade from the 5 year old Blackberry that must have taken that photo :)