But Bill Self not pleased with guard's turnovers

Kansas guard Sviatoslav Mykhailiuk (10) hangs for a shot against Washburn forward Brady Skeens (22) during the second half, Tuesday, Nov. 1, 2016 at Allen Fieldhouse.

Even though Mykhailiuk’s first three-point try missed badly, he said he went on to make four of his final five long-range attempts due to the spacing created by sharing the court with KU’s various talented guards.

“When we’re playing four guards,” Mykhailiuk said after the 92-74 win, “everybody had to drive the ball and just kick it. That’s what opened up all the easy shots and easy drives.”

Entering his third season at Kansas, Mykhailiuk drained three from deep in the final five minutes of the first half, helping the Jayhawks take a 50-34 advantage into intermission. 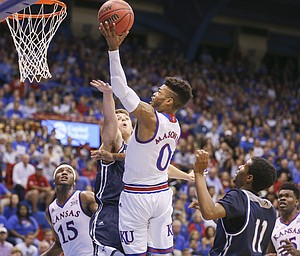 “We were pretty bad today,” the reserve wing said, referring to not just a slow start to the first half, but the overall effort in the 18-point preseason win. “I just came in and just did my job.”

Self, though, didn’t think the 6-foot-8 scorer fulfilled all of his on-court responsibilities. While discussing which Jayhawks played well in the first half, when Mykhailiuk put up nine of his points, the coach only uttered the name “Svi” to say the Ukrainian “made shots.”

Self wanted to see much more from one of his key backcourt players.

“You can’t have guards that make five turnovers a game,” Self said, referring to Mykhailiuk’s four turnovers in 24 minutes.

Between starting freshman swingman Josh Jackson and Mykhailiuk, KU only got one assist and nine turnovers out of its third guard spot.

“You can’t have that,” Self said. “I would rather guys not turn it over and miss shots, ’cause at least you still get a chance to score. But when you turn it over you don’t have any chance to score. Just being so careless, that’s the thing I think our guys need to improve on as much as anything else. And we will. We’ll get better at that.”

Indeed, Kansas turned the ball over 24 times as a team, with Mykhailiuk and Jackson the worst offenders. NCAA Division II Washburn scored 23 points off of the Jayhawks’ mistakes.

Both Mykhailiuk and sophomore Lagerald Vick are expected to carry the load as backups on the perimeter this season. And while Mykhailiuk admitted the Jayhawks have much to work on, including rebounding — WU won the battle, 45-44, prompting Mykhailiuk to call the effort “awful” — he also sees the offensive benefits of playing with Vick, starting guards Devonté Graham and Frank Mason III and Jackson.

Mykhailiuk said when those four-guard combinations take the floor, they’re all capable of driving and shooting.

“When you’re playing like that, it’s gonna be a lot of fun,” Mykhailiuk added, “because people have got to help, and that’s opening up three-point shots.”

KU shot 10-for-22 from deep in the exhibition win. Self, though, left more concerned with the botched offensive possessions.

If our front court players are a foul waiting to happen, we'll need to play 4 guards.

If we're playing 4 guards, hopefully more than 1 of them learns to rebound.

Damn straight. The post play was not stellar for a team Kansas clearly outsized, and the speed of the guards was not apparent (poor transition, 50/50 balls going the other way, etc.).

Every year we see freshmen, especially, fouling a lot early in the season. Most of them improve those numbers through the season, although some do not. In addition, the NCAA is once again emphasizing one area which results in lots of early season fouls as the players and coaches adjust. By conference season these things will again calm down. So it seems to have been in the past.