After five years as a player and 10 more working various jobs in the athletic department, Banks Floodman is leaving Kansas University.

Floodman, a Wichita native and former KU linebacker, is taking a job with the Sunflower Development Group, a real estate company based in Kansas City that focuses on commercial and residential projects in urban settings.

“It was not an easy decision to leave KU, and it’s still not easy,” Floodman told the Journal-World. “It’s the only thing I know, and I’m very passionate about it and always will be.”

After finishing his football career in 2005, Floodman worked as a graduate assistant in the ticket office, licensing and marketing departments for three years before joining KU Athletics full time in 2008. 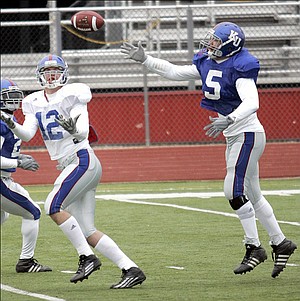 Floodman spent the past three years heading up KU’s Williams Education Fund, by far the most important post-graduation role he has had as a Jayhawk.

During that time, he was the driving force behind some of the most visible on-campus projects, including the construction of the McCarthy Hall basketball dorm, the DeBruce Center, which houses James Naismith’s original rules of basketball, and, most recently, a $2 million upgrade to the Anderson Family Football Complex, which is ongoing and will be completed in time for the 2016 season.

“Banks has done an exceptional job leading the Williams Fund,” said KU athletic director Sheahon Zenger. “There have been a number of people over time who have had that role, and he would be at the head of the pack. We are extremely grateful for all of the roles he played during his time at KU.”

Floodman’s ascension to the top of the Williams Fund — his official title is Senior Associate Athletic Director for Revenue Development — occurred quickly.

After spending six to eight months as part of a trio of interim directors, he was promoted to the lead role because he “shined” during that time.

His passion for KU and ability to communicate both with donors and student-athletes about the importance of what the Williams Fund offers made the job a perfect fit. A natural leader from his three seasons as team captain under former KU football coach Mark Mangino, Floodman also offered valuable guidance for his 18-person staff. Even while leading the department to some big days, Floodman chose first to compliment those around him.

“The thing I’m most proud of is, I always love when you see staff exceed their own expectations,” he said. “Some people weren’t comfortable asking for big gifts, and we collectively were able to fully fund all of those projects in a matter of about 12 months. We’ve got a great staff and a lot of hard-working people in that office. There are a lot of different personalities in there, and they’re all very good.”

Floodman, who will continue to live in Olathe with his wife, Erica, and son, Pierce, said the thought of moving on from athletics had created some nervous nights, but the opportunity to work with a close friend and take on a new challenge was worth the leap.

“All I know is athletics,” he said. “So it’s gonna be a total game-changer, which I think is part of what intrigues me about this. I’ve always wondered what life after sports was gonna be like.”

Floodman may be leaving KU as an employee, but he vowed to continue to support the school he loves both as a fan and in any other way he can envision. Asked to pinpoint the biggest challenge facing his successor, Floodman did not hesitate to answer.

“Making sure we get football on the right track is priority 1, 2 and 3, far and away,” Floodman said. “It has to be. It is the most important thing that the department and even the university will address in the next few years.”

Zenger said he and his staff already had begun the process of identifying the next Williams Fund director and sounded optimistic about his options.

“We intend to have his replacement hired at the latest by Aug. 1, and it could easily be sooner than that,” Zenger said. “In the meantime, (assistant AD for development) Pat Henderson, who has been with the department for over a decade, will be the interim director and I’m very comfortable with him at the helm during this time.”

Congratulations Banks. Thank you for your dedication and continual support of the Jayhawk's Football Program. ROCK CHALK!

Thanks, you can't hurt yourself by diversifying your skill-set.

So long, Banks! I will always remember you as being a key component of Mangino's turnaround of KU football.

Best wishes. Am sure you will be a total success as you have been all your life.