Baseball loss to K-State a blow for Jayhawks

Kansas senior Colby Wright walks off the field after hitting a pop up for the final out while Kansas State players line up in the background to celebrate during their game Sunday afternoon at Tointon Family Stadium in Manhattan. The Jayhawks fell to the Wildcats, 8-5.

Manhattan — Kansas University senior Colby Wright returned to the Jayhawks’ lineup with a bang Sunday, but the second baseman’s two-home-run, four-RBI afternoon was not enough, and Kansas dropped the series finale to Kansas State 8-5 at Tointon Family Stadium.

Left on the bench during the first two games of the series because of back spasms that surfaced Friday — KU won the opener 4-1 and fell in Game 2, 12-2 — Wright was back in the clean-up spot Sunday and uncorked a three-run home run in the top of the first to give Kansas an early lead and later tied the game at 5 in the top of the sixth with a solo shot that came after the Wildcats scored three in the fifth to take a 5-4 lead. 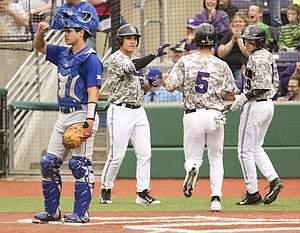 Wright finished the day 2-for-4 with four RBIs, two runs and a walk.

“It was a really impressive performance by him after being out the (first) two days,” Price said of Wright. “He could barely walk around on Friday, and he was huge. It was a big-time game, and he has been a big-time player. He played one of his best games ever today.”

As has been the case throughout the season, the Jayhawks struggled to take advantage of a great start to a conference series by being outscored 20-7 during the final two games of the Sunflower Showdown.

Wright’s early home run and a few strong innings by starter Blake Weiman gave Kansas the early edge and appeared to put the Jayhawks in position to win the rubber match. But KU managed just four hits over the final five innings and gave the Wildcats time to claim control.

“I was proud of the way our guys competed and grinded it out,” Price said. “It had the chance of being a great series win, but I tip my cap to K-State. They came up with some big swings late in the game.”

The Jayhawks will play Tuesday at Wichita State and then will need some help next weekend to keep their season alive. Trailing both Baylor and Kansas State by a game-and-a-half for eighth in the league, KU will need to win at least two games in its season finale at Oklahoma State and hope that either Baylor (vs. Texas) or Kansas State (vs. TCU) drops a pair or gets swept.

Well, it's the same 'ol same 'ol with KU vs KSU on the diamond; Cats win. This makes six out of the last seven series with them....KU only has three series wins against KSU since 2006...and only with Kansas having much better teams. Any year KU and KSU are about even, or KSU is better, they ALWAYS win. Supposedly we are young and banged up pitching wise...I would say one more year for this coach and he has to beat K State next year or he's out. Can we even sniff a conference winning record?

Can we please dump Price and hire a new coach. In 14 seasons (including this one), Price has only produced 3 NCAA tournament teams. I can only speak for myself, but making the NCAA tournament 21% of the time at a major conference school should be unacceptable.

Heck, this season could be the 6th time time in 14 seasons that Price doesn't even reach the Big 12 tournament. KU baseball is not in better shape than today than it was 14 years ago when Price took over and it's time to move on and find someone who can do better.