KU senior shortstop Chaley Brickey just misses a hard-hit ground ball in a doubleheader against Iowa State on Saturday, May 14, 2016, at Arrocha Ballpark.

Kansas University shortstop Chaley Brickey first set foot on the KU campus as a 17-year-old freshman four years ago. On Saturday, during KU’s 11-1, 8-0 doubleheader sweep of Iowa State at Arrocha Ballpark, Brickey played her final home game for the Jayhawks.

Between that first moment as a wide-eyed rookie and that final out before the tears began to flow, Brickey put together one of the best careers in Kansas softball history. 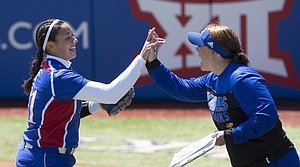 Dubbed by some within the program as The Pint-Sized Powerhouse, Brickey leaves Kansas with the all-time record in career walks (143), runs scored (172) and RBIs (155) and ranks second all-time with a .362 career batting average, 39 career home runs and 54 career doubles.

Numbers like those made her 1-for-3, three-run, two-RBI performance during Saturday’s sweep seem a little underwhelming. But the way her team dominated the Cyclones during her final series as a Jayhawk was the perfect ending to a stellar career.

Brickey’s decision to graduate high school a year early to get her college softball career going started as a joke. But after looking into it and discovering she actually could do it, the 5-foot-1 infielder from Haltom City, Texas, pursued it tenaciously.

Although tears — from her and her mother — spilled down her face during the postgame ceremony that honored KU’s five seniors, Brickey quickly found the smile that was so often present as she helped lead KU softball to a 143-74 record and two NCAA Tournament appearances during the past four years. Brickey, who recently was drafted by the Pennsylvania Rebellion of the National Pro Fastpitch League, will return to KU next season in a coaching role. That fact made Saturday’s send-off easier to handle. But it did nothing to keep the tears at bay.

“It was like saying goodbye to another mom, like saying goodbye to family,” Brickey said of Smith and her teammates. “Thankfully, I’ll be back next year, so I’m not actually saying goodbye, I just won’t be playing under her any more. But I couldn’t have asked for a better senior class to go out with. They’re all great people and are gonna do great things in the future.”

As for the specifics of Saturday’s sweep, KU benefitted from three monster innings. Behind strong pitching from Game One winner Alexis Reid (5-6) and Wesley (6-5), who started and won Game Two, the Jayhawks scored five runs in the second inning and six more in the fourth to take the opener, and added a six-run fourth in the nightcap to complete the sweep.

The Jayhawks (31-20 overall, 8-9 Big 12) will learn their postseason fate when the NCAA Tournament field is announced tonight. Many believe the Jayhawks will be left on the outside looking in, but their fourth-place finish in the No. 3-rated RPI conference and 26th-ranked strength of schedule gives them reason to watch the selection show, slated for a 9 p.m. start on ESPNU.

“Thirty wins in a season is nothing to be ashamed of,” Smith said. “And I’m proud of the girls and proud of how they finished this weekend. We had some breaks that didn’t go our way this year, and last year every break went our way.”

If Saturday was the end, Brickey said she would walk away from her incredible career most proud of one thing.

“Just helping this program become what it is today,” she said.

Sad if they don't make it, but it's their own fault. You ding OU for their only conference loss of the season, but give up 21 runs in two Ls to a supposed bad OSU team, and lose two out of three to UT? Brickey had a nice run, but like their baseball brethren, we need better pitching: you can't out slug teams....have to win more 3-2 and 2-1 games. I'll say this: they are more consistent, more competitive...just need to develop more pitching to kick the door in. Go Jayhawks!