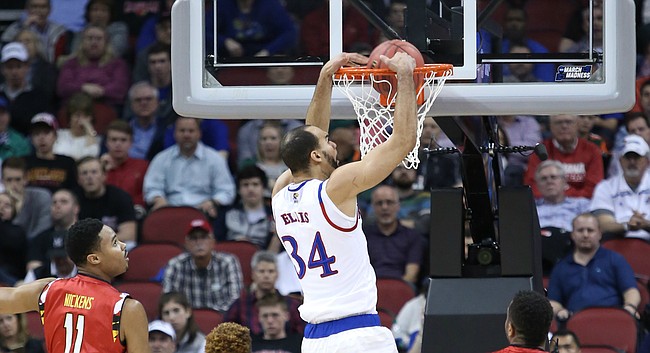 Kansas forward Perry Ellis puts down a dunk in the first-half of the Jayhawks game against the Maryland Terrapins Thursday, March 24, 2016 in an NCAA Sweet Sixteen matchup at KFC YUM! Center in Louisville, KY.

Kansas University senior forward Perry Ellis had the fourth lowest body fat of all players tested Wednesday at the 2016 NBA Combine in Chicago as reported by NBA.com.

KU freshman Cheick Diallo was measured to have a 7-foot-41⁄2 wingspan, second longest of all players at the Combine. China’s Zhou Qi had a wingspan of 7-73⁄4. Vanderbilt’s Damian Jones had third longest at 7-33⁄4, and Purdue’s Caleb Swanigan checked in at fourth at 7-31⁄2.

The complete NBA measurements and testing results have not yet been released. About 70 players are at the Combine for testing.

Selden’s No. 7: KU’s Wayne Selden Jr. is listed as the seventh-best shooting guard in the draft by NBA.com’s David Aldridge. Aldridge has Selden being selected “late first round.”

Of Selden, one NBA Eastern Conference scout told Aldridge: “His shot is still kind of all over the place. I thought he had gotten a little more accurate.”

Another scout said of Selden: “He tapered off as the season went on but when he gets to our level and can commit to being a 3-and-D player, he’s got great size. He’s tough. He’ll fill a spot on the bench fairly well.”

Aldridge noted that Selden “raised his draft stock this year by shooting almost 40 percent behind the arc. The second-team All-Big 12 selection now has to show it wasn’t a one-year fluke.”

“He (Ellis) has become something of a specialty player,” one scout told Aldridge. “Perry’s shown that he can shoot the three so that helps him a little bit. It depends on the staff and the coaches and what they want from him. I think people are going to see he may be able to become a Danny Green type — hit a spot-up three and be able to guard a three.”

Another scout said: “What he is is just solid. You know what you’re going to get every day. There’s a beauty in that to coaches. Year after year he’s consistent to what he does well. The game getting smaller is helpful to him.”

Off to the pros: Iowa State has lost Australian junior college power forward Emmanuel Malou to the NBA Draft. ISU announced that the incoming 6-9 forward will bypass his college eligibility for the pros. He sat out the 2015-16 season concentrating solely on academics.

“I know that it is going to require a huge amount of work, but I am motivated and excited for the challenges that lie ahead,” Malou told the AP on Wednesday. “I would like to thank all the staff at Iowa State for all that they have done for me.”

Perry may need some of that body fat in the WWE NBA!!!

Tony, I was thinking that maybe he should have added some weight at Kansas. 4% is extremely lean. The average weight for someone his age is somewhere around 14%. Bodybuilders aim for 2 to 4% went on stage competing. College players average somewhere between 6 - 10%.

Most of that info was found searching through:

And other similar searches.

A power forward in a small forward body. Love Perry and wish him the best. RCJH

I'm telling you, people are selling Perry short. I think he could be a dangerous role player for some team coming off the bench!

I agree. His footwork is solid, he has played some of the best players in the NBA over the years, he will be a solid 6th man. Perhaps even make a rotation.

I may be missing something but I don't think that Perry Ellis has the tools to shoot it like Danny green. That's not to say that Perry won't be able to knock down an open three. But Danny Green is a natural three and has one of the sweetest jump shots in the game. I would love to see Ellis develop into a player who can guard an NBA three man, but I'm not sure that he demonstrated that ability while he was at KU. Not that he was often asked too.

Not too short-change Perry. I still think that he has a very high NBA ceiling, but he has a very low margin of error. I see him developing into a small ball stretch 4 rather than a 3. I see him as a possible Paul Millsap lite.

I might be missing something also. I really don't get the Perry Ellis/Danny Green comparison. Green (6'6") has been with the Spurs since his rookie season at Cleveland and has always played at the 2 spot. His last season, meaning the current one has been numerically the worst since his first year at San Antonio.

Perry Ellis at 6'8" has always played as a forward. Yes, I do understand that players get moved around when playing certain lineups but I can't remember Ellis ever playing at the 2.

I think, totally imo, that Ellis can match or better Green's points and/or rebounds, 9.1 and 3.6 respectively but I think it would make more sense to compare Ellis to other forwards than to backcourt players.

The ever fair NCAA hasn't ruled on whether or not Emmanuel Malou is eligible or not. I sincerely doubt he will be drafted after not having played the past season. Probably get some individual workouts.

Iowa State getting the KU treatment.