Bill Self: Elite Eight loss ‘hard for everybody’

Louisville, Ky. — Kansas basketball coach Bill Self, as well as his players, hoped Louisville wouldn’t be their last stop of the 2015-16 season.

But Villanova knocked the Jayhawks out of the NCAA Tournament Saturday night, with a 64-59 victory at the KFC Yum! Center.

“It is hard for everybody,” KU coach Bill Self said. “These kids have done everything they could possibly do. I feel awful for Perry. He’s given us so much. Tonight wasn’t his night.”

Of the game, Self said: “We were up 16-12 and then it’s 32-23,” he said of Villanova’s lead. “A lot of that was shot selection. Live ball turnovers led to layups. We bailed them out by clipping off threes. Other than Devonté (Graham) we were 0-11 from three going into Frank’s (Mason III) last shot (late three to cut deficit to one) with 30 seconds left. We could have gotten more big touches inside. I think we were out of character for the most part the whole night.” 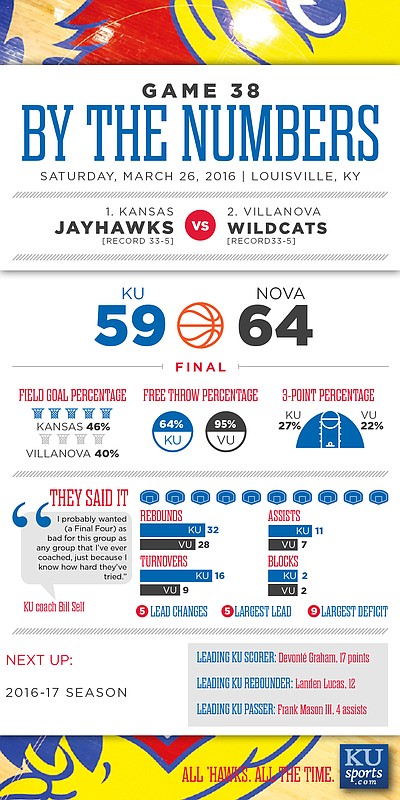 If I could take a pill to make me completely indifferent to sports I would. The high's are wonderful but the lows are painful.

Boy I'm sure with you on that one, Michael -- and there are so many more lows than highs.

I'm definitely jealous of my friends who don't care about sports. It would be nice to be able to just let it go.

It is interesting Roy Williams never won a NCAA Championship at Kansas but may be on the way for his third at North Carolina.

"I feel awful for Perry. He’s given us so much. Tonight wasn’t his night.”

I'm as big a fan of Coach Self as anyone, but this really frustrates me. This was not a failure of any player, this was a failure of coaching. When a team focuses its entire plan on stopping one player, it's up to the coaches to recognize this and make adjustments to take advantage of that plan. When they're triple-teaming Perry Ellis, this creates opportunities for other players. And we did take advantage of this at times. But to hear Coach say "We could have gotten more big touches inside. I think we were out of character for the most part the whole night.” as if we were going to stubbornly force the offense through Ellis regardless of the opponent's game plan, that's frustrating. And when did we become a one-man show? The strength of this team was that whenever a team shut down one player, other players stepped up. Even if they stopped Ellis and Selden, we got the scoring we needed from Graham, Svi, Mason, etc. In this game, it seemed like we decided we were going to get our offense from Ellis or Selden come hell or high water. All of the commentators were saying before the game that this team would go as far as Ellis and Selden took us, but I was thinking "if that was true, we wouldn't have had nearly as much success as we've had this year". We've won games where both Selden and Ellis struggled to score. We won because there was no one or two players you could key on to stop us. So Coach is right, we did get out of character. But I don't agree with him on how we did that. Our character is not to live or die by Perry Ellis and Wayne Selden. In this game, we put it all on Ellis and Selden and we lost.

Had Coach been willing to adapt, Ellis would have been the distraction that cleared the way for just about any other player. Instead, we constantly worked to get the ball to him and we failed more often than not. Villanova dared us to play through Ellis, and by playing through him, we played through them.

There was one reason why I believed this team had a chance to win it all. It was because no one or two players carried the team. Any player could carry us on any given night. Forgetting that fact is why we lost. Officiating is going to be bad. We're a good enough team to have overcome bad officiating in this game if we'd have adapted. And that's on the coaches.

Now, all that said, I'm not saying at all that we should be looking for a better coach. We have a great coach, one of the greatest ever. This is just an area where I think there could be some improvement. I thought Coach showed more flexibility this year than he has in the past, but when it came to the do-or-die post-season, that flexibility gave way to stubbornness. Perhaps this is why we flourish against the familiar in conference play, but against unfamiliar post-season teams, we underperform.

Well, regardless, congrats to the team for a great season. As always, I'm proud of our success this year.

I think as fans, we look to place blame and often times it ends up in the coaches lap....... I do not believe that this loss was on Self, I'm sorry. Coach Self did not jack up ill advised 3's when panic set in early in our shot clock without running our offense. Coach did not lackadaisically turn over two passes at the top of the key that led to 4 easy points for Villanova. Coach did not reach out and check someone every other trip down the court when it was obvious that the refs were calling it. Coach did not try multiple times to dribble through the middle of two defenders and turn the ball over. Were you in the huddle listening to what he was coaching..... I doubt it. Who's to say he didn't make adjustments and our players just didn't execute them as needed? As far as feeding Perry..... uhhhh he's our best player and coach was trying to get him going. This was not the first game he'd been the focal point of the other teams defense and he was able to overcome in the other instances. Selden missed all of his 3 pointers, most were good looks. Coach Self didn't shoot those shots. I don't know how many bunnies we missed down low, but I'm pretty sure that coach Self's scheme is what got us those looks, although he was not the one shooting those either. I'm also pretty sure that Coach Self was nt the one missing free throws either..... my point is, as a player you have to perform to execute the coaches adjustments and the players just didn't execute very well. That's not on coach, that is on our guys. I agree that some things could have been done, but this loss was FAR from coach Self's fault in my opinion. AND DON'T EVEN GET ME STARTED ON THE OFFICIATING!!!

"....perhaps this is why we flourish against the familiar......but against unfamiliar....we underperform." John: how do we get you in front of the AD/Bill to be an assistant next year?---one of the smartest observations I've read from anyone. It's up to the coach to direct the team's actions and reactions--KU just didn't adjust, or just do what they have done most of the season, go to 'someone else' to step up. I think Bill is a great recruiter, a good man, a good teacher but 'game day' coaching in the tourney is a huge negative. We need you on the bench John. Rock Chalk.

In the last 25 years, only 20% of our losses were to teams that really beat us solid, and wasn't much due to us not playing our best. Losses to Duke & KY in the title games, The 2000 loss to Illinois (to Self), 2001 to Duke in the round of 32, UNC in F4 in '93, maybe a couple others. Too many preventable losses. Sure, you're not going to win all of those games. And I wouldn't trade Coach Self for anyone. But I keep saying this every year, he does have to look at how he preps for the tourney. Maybe I'm full of it, but maybe words like, "OK, guys, either you drive to the paint or get a shot clock violation...no threes on this possession." Maybe that's dumb. Don't know. Just my thoughts.