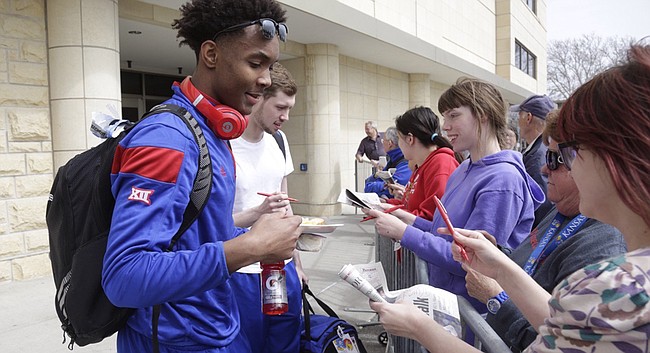 Kansas University basketball fans bound for Louisville are in for a long drive but should find a lot to do once they arrive in this colorful and historic Kentucky city, located on the Ohio River.

Here's what you need to know about the game, the KU Alumni Association fan events and things to do in downtown Louisville.

KU tips off against the Maryland Terrapins at approximately 9:40 p.m. (Eastern Time) Thursday. Maryland — coached by former KU basketball player Mark Turgeon (1983-87) — is the No. 5 seed in the NCAA Championship South Regional bracket.

The winners of each game will face off on Saturday in Louisville, time TBA. 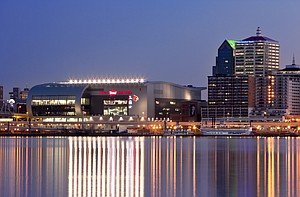 A few facts about KFC Yum! Center: Capacity is 22,090, and in addition to hosting entertainers and other sporting events, the arena is the official home of the University of Louisville men’s and women’s basketball programs.

Fans can watch the Jayhawks warm up from 3:10 p.m. to 4 p.m. Wednesday at KFC Yum!, according to associate athletics director Jim Marchiony.

The drive from Lawrence

It’s going to take a lot longer than it did to get to Des Moines. Louisville is 8 hours 15 minutes, via Interstate 70 and Interstate 64 east, according to Google maps.

KU does not have any tickets available for the public, Marchiony said.

According to the KFC Yum! Center, tickets can be bought and sold directly with other fans through the official NCAA Ticket Exchange. 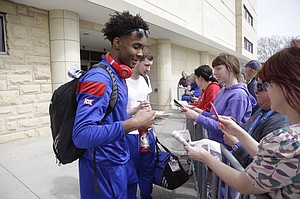 Thursday’s pre-game party is set for 3:30 p.m. to 6:30 p.m. (Eastern Time) in Cascade A, B and C rooms of the Kentucky International Convention Center, 221 S. Fourth St. in Louisville, about a block south of the arena. (Use the Market Street entrance.)

A pep rally featuring the KU spirit squad is set for 6:15 p.m., so fans who want to watch the early game have time to get there afterward.

The KU Alumni Association lists as an official Louisville watch site the Buckhead Bar and Grill, 3020 Bardstown Road. The game will be televised on CBS.

Pack an umbrella. The National Weather Service predicts highs in the 50s and 60s for the weekend, with an 80 percent chance of rain and thunderstorms on Thursday.

What else to do in Louisville

Right. (For now, at least. The famous Kentucky Derby also happens there, but not until May.)

On the way is the Evan Williams Bourbon Experience, at Sixth and Main streets, where you can tour an operating artisanal distillery, learn about Kentucky bourbon history and — yes — try some if you’re old enough.

Bourboncountry.com suggests the best bars for tasting — via an “Urban Bourbon Trail” booklet and app — as well as other distilleries in the area. The featured exhibition right now at the Frazier History Museum, also downtown at 829 West Main St., is called “Spirits of the Bluegrass: Prohibition and Kentucky.”

Downtown Louisville also is home to the Louisville Riverwalk and Waterfront Park along the Ohio River, the Muhammad Ali Center, the Kentucky Science Center and plenty of restaurants.

Is it Thursday yet? I can't wait!

Remember it's not "Louie Ville" it's "Luh Bluh" - pronounced as though your mouth was full of cottonballs and your tongue was biologically welded to the roof of your mouth (i.e. in a late-career Marlon Brando accent).

As someone who went to grad school in Louisville for 2-1/2 years, I can tell you that's not the way the locals pronounce it. They typically will say "Loo-a-Vull".

I was poking a little fun Bryce - I tried to make it as obvious as possible without literally typing "lol jk." :P

Skip the bat museum, I hear the Pitino recruiting parties are a lot more fun.

A Louisville things to do with out a trip to the Brown Hotel for a Kentucky Hot Brown and a trip to Graeters for the best ice cream in the world is incomplete. Wish I was going