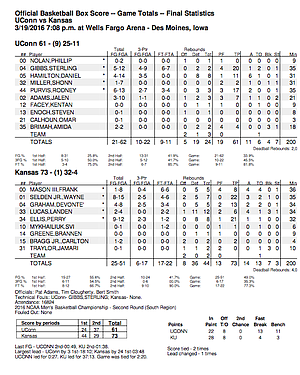 Good win, Jayhawks!! Still, hate to see that lead slip away like that. A stronger team is NOT going to fade like UConn did down the stretch. Here's hoping that nobody got seriously dinged up.

BTW, did Perry get anything serious to his leg? I missed that part of the game, just caught comments and replay about banging knees. Also Devonte?? Damage reports?

Rock Chalk to Houston and the National Championship!!

UConn did not fade, KU pushed them back. UConn has a record of coming back as they did to make it to the 2nd round. This was an excellent KU win.

Apparently "late in the first half" = "midway through the second half."

Ditto, Bryce. I always admire people who show class like Jalen and Coach Ollie. Will wish them a lot of success in the future - - just not against us.