Huskies: Hey, we bleed blue, too

But there are those inside the Connecticut locker room who feel that the Huskies historically have not been given the same respect as blue-blood programs like Kansas, Kentucky, Duke and North Carolina.

“I don’t think we get the same kind of love,” UConn freshman Steven Enoch said. “But that doesn’t matter. We like being the underdog, and we want to go out and prove it because it’s always fun to prove people wrong.” 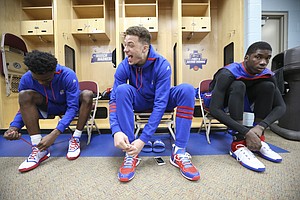 The Jayhawks and Huskies talk with media members before their matchup in the round of 32.

Kansas basketball coach Bill Self answers questions from reporters as his top-seeded Jayhawks prepare to face Connecticut with a spot in the Sweet 16 on the line. Self gets into the Huskies' strengths, KU's progress and much more.

Ellis and Graham on avoiding another 2nd-round letdown

Kansas basketball players Perry Ellis and Devonté Graham meet with media members the day before the Jayhawks' second-round meeting with Connecticut in the NCAA Tournament. The Jayhawks discuss avoiding another second-round letdown and other topics.

Added junior guard Rodney Purvis: “We kind of don’t, but it is what it is. You can go back to whenever you want and do all the research you want, and everything is even, if not better.”

However, much of Connecticut’s most notable success has come in recent years. Therefore, the program has not been able to sit at the same poker table when the playing cards being used feature faces belonging to James Naismith, Adolph Rupp, Dean Smith, Roy Williams and Coach K.

But it’s not as if UConn has been playing basketball for fewer seasons than those same powerhouse programs. In fact, UConn’s first college basketball season came in 1901, just two years after KU’s first game and before Kentucky (1903), Duke (1906) and North Carolina (1911) ever tipped off their first seasons.

Therein lies the fight that the Huskies are facing.

National titles are nice, and they’re a huge part of college basketball.

But, unlike those other programs, UConn has suffered through some lean seasons and even stretches during its storied century of college hoops.

Take a recent example as the best proof. After winning the national title in 2014, with Ollie and point guard Shabazz Napier leading the way, the Huskies followed that up by losing in the first round of the NIT in 2015.

And, even though they appear to be primed for tonight’s clash with Kansas (31-4), they entered this year’s tournament as a No. 9 seed and were a first-round underdog to a Colorado program making just its 13th appearance in the NCAA Tournament.

Take senior Omar Calhoun, for example. Asked Friday if he knew much about the history of Kansas basketball, the 6-foot-6 guard from Brooklyn offered an immediate answer. But his sound bite did not have anything to do with the game’s inventor, Wilt Chamberlain or even Danny Manning.

“As kids, watching college basketball growing up, we know the history, from watching Mario Chalmers hitting big shots and stuff like that,” Calhoun said. “There’s a lot of history on both sides, so it should be a great game.

Sterling Gibbs: Huskies eager to prove they’re a top team, too by KUsports.com

I already smell blood. Let's beak 'em, Hawks! Let's prove east-coast biased that KU is the real #1. I really hope our team just beat the heck out of every opponent without mercy. Start leading early and never look back. Can't take the Huskies lightly. They've been in the tourney so many times and won NC more than us in the past decade. Their bigs will certainly make it hard for our guards to drive, their BPG is a bit scary. I'm counting on Graham and Mason to breakdown their defense. God bless, let's go Jayhawks!

On the contrary, I think UConn gets a lot more love than they realize, especially with the four national titles they won in a 15-year span. Truth is, UConn is a Power-5 caliber school trapped in a non-Power 5 conference.

UCONN is easily the scariest of the 8/9 seeds this year. In part due to its tournament history and in part due to how hot it got late in the season.

I wouldn't be surprised if we look back on this game as KU's toughest on its path to the Final Four.

When I saw this game released in the brackets, I was scared especially considering how uconn hit a game tying 3 to force another OT. This is what I don't get? UCONN had a so-so season, on the bubble for an NCAA bid & very well headed to a consecutive NIT appearance; instead they have the momentum to probably win and reach a sweet 16 game. My heart says Kansas but reality says UCONN

That quote about "history" and referencing Chalmers hitting big shots may sound a little silly on the surface, but when you remember that freshmen in college were 10 or 11 when he hit that shot, and that's the kind of mindset a lot of the kids KU is recruiting have.

They will use this for that chip on the shoulder mentality. Hope it does not work.

Love how the Hawk faithful are already setting up for a let down. In Bill We Trust is all we hear all year long, yet we don't trust him to beat a 9 seed. So sad the expectations Bill has created for the tournament. But hey! 12 in a row right?

The past is over...this is a new year, new teams, and new players...what happened before has no bearing on tonight!! We have to keep going forward so H CBS has no time to think about the pokes job... LOL, no not Roy part 2