Peay alumnus ‘Fly’ quite a character … and scorer

Des Moines, Iowa — Never having spoken to a to a man who scored 100 points in a basketball game, tracking down a phone number for former Austin Peay great James “Fly” Williams and giving him a call seemed a timely thing to do.

“True,” Williams said Tuesday by phone from Brooklyn, N.Y. “I had 45 points in the first half, switched teams, and scored 55 in the second half.” 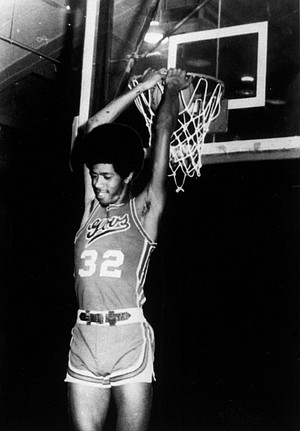 James "Fly" Williams dunks the ball back over his head during an Austin Peay State University practice session in this file photo from Jan. 25, 1973.

Fly’s 100-point outburst came in an organized playground league known as IS8 in Jamaica, Queens, N.Y., in the summer of 1978.

Known as a great character and scorer, Williams is the most famous player in the history of Austin Peay (pronounced like the vegetable), today’s first-round NCAA Tournament opponent for Kansas University in Wells Fargo Arena.

Streetbasketballassociation.net ranks Williams as the second-greatest playground basketball player of all-time, behind only Earl “The Goat” Manigault.

Fly, 63, came to Clarksville, Tenn., from the impoverished Brownsville neighborhood of Brooklyn. He rewarded then-Austin Peay assistant and current Florida State head coach Leonard Hamilton for his persistence in favor of going to schools with much stronger basketball traditions.

“Coach Hamilton stayed in a car in front of my house for seven days to recruit me,” Williams said.

“When I went for my recruiting visit, they had a sky-writer write ‘Fly’ in the sky. Coach Hamilton told me Austin Peay would be the right place for me, and it was.”

In his two seasons, Williams averaged 28.4 points for his career, ranked in the top five in the nation in scoring both years and led the Governors to a pair of NCAA Tournament appearances in 1973 and ’74. The impression the chant his play inspired will endure forever.

Fly’s No. 35 jersey was retired during a halftime ceremony seven years ago, but other than that, the school has lost touch with him, according to a spokesman, and he hasn’t tracked the basketball team too closely.

Fly said he will make a point to watch the game today.

“They won’t beat Kansas,” he said. “Kansas has a great team. They don’t have anybody who will go to the pros, unless they get with the right team maybe they could. But collegiately, they have a hell of a team.”

Williams said he has run his youth basketball program — “For the Love of Youth, that’s F-L-Y” — for 23 years, teaching basketball players anywhere from 5 years old to teenagers. He counts Seton Hall star Isaiah Whitehead among his former basketball pupils. The Brooklyn Nets honored him with an “Ordinary People Doing Extraordinary Things” award during a timeout two years ago.

Williams said he spares no details in sharing with youths the mistakes, including hard drug use, he made that cost him a lung in a shooting and led him to a pair of stints behind bars, including 14 months in notorious Attica in upstate New York.

“Hell,” Fly said of Attica. “That was hell. I wish no one to go there. I tell them all the truth, don’t bite my tongue. I don’t lie. I tell them to stay in school and try to make the best out of life.”

Williams said that looking back, staying four years and earning a degree from Austin Peay would have served him well. He played one season for the St. Louis Spirits of the ABA — a young Bob Costas was the play-by-play man — and then in Europe.

Finding his way to the hoop was less of a challenge than finding his way in life. Long before the introduction of the three-point shot, Williams had a pair of 51-point games for Austin Peay, a school that never had appeared in the Div. I NCAA Tournament before his arrival. Fly totaled 100 points in four NCAA Tournament games, and the school has played in five NCAA Tourney games, losing four, since his departure.