It’s an unofficial designation with a difference of opinion on which schools deserve the label. The general consensus zeros in on six schools.

The longest national-title drought for the blue-blood class of six schools? Just three seasons (2002-04). Blue bloods have won 32 of the past 54 NCAA tournaments.

UCLA is the lone blue blood excluded from this year’s NCAA Tournament field, and 60 percent of this year’s blue bloods are playing in the same pod.

Des Moines, site of a subregional playing host to four teams from the East regional, four from the South, will be crawling with blue-blood fan bases this week.

Look for Kansas and Kentucky fans to boo each other at the games. With any luck, they’ll socialize in different watering holes.

They won’t be the only fan bases wearing gear that recognizes national championships of yesterday.

Starting in 1999, guess which school has won the most national titles.

UConn, which won the American Athletic Conference tournament title by defeating Cincinnati in four overtimes, 104-97, Temple by 15 points and Memphis by 14.

The ninth-seeded Huskies face Colorado for the right to play Kansas in the second round.

Dangerous UConn won the national title two seasons ago as a No. 7 seed.

The school’s winning history doesn’t stretch back long enough to merit blue-blood status, but nobody has been more impressive as cold-blooded killers in March in recent decades.

— Sports editor Tom Keegan appears on The Drive, Sunday nights at 10:30 on WIBW-TV.

The city of Des Moines was the biggest winner on Selection Sunday.

"The ninth-seeded Huskies face Colorado for the right to play Kansas in the second"?

C'mon, Chris. I know you never look past anyone, but Kansas would become the first team ever to lose to a 16 seed for them not to move on. Yes, every game makes me nervous, too, but KU will beat Austin Peay.

Nice to see you again Rodney. Dont know why but it seems like we havent crossed paths here recently. I checked your comment history to see if you had taken leave, but youve been here all along.

That being said, I think we're kinda splitting hairs here, but Im to choose a side I gotta go with Chris on this one. You have to respect every opponent...even if they are "not capable" of beating you. Art Briles said the same thing playing Kansas a couple of years ago in football. I happen to think it applies everywhere.

I dont know a lot about Austin Peay, but I hope what you say is true about their lack of defense. I hope after the game that it turns out Kansas has a practice game that actually counts for a win. But on this side of tip-off, I gotta say give them respect. No one ends up in the tournament because they're terrible.

Looking past a team to the next game is a bad habit that KU does not need to pick up at this time of year. Treat every team as a team that is more than capable of beating you. One game at a time.

AP is dependent on a 6-8 sub 200 lb. player for their offense. The dude makes Bragg looked bulked up.

UConn's 4 NC's in the last 17 years is really impressive (especially their most recent one).

The fact that KU only has 3 (not counting the Helms) in the last 75 years (counting from the teams first F4 of 1940) leaves a little to be desired for the program that has been to 14 F4's. I guess it is a 21% win average once in the F4 which isn't too much worse than the coin flip average but being KU I would have thought it would have been better than that. UConn's 9-1 record is astonishing.

Hopefully number 4 will be coming home to Kansas this year since all others have come in presidential election years.

To be fair, UConn has 4 titles in the past 75 years vs KU's 3 in that time. It's not like they weren't fielding teams until 1999. KU also fell short of two more titles by a combined 4pts. That said, I want us to get to 5 as soon as we can, and there's no better time than the present to get that done.

Fair about the years but my point was primarily UConn's record in F4. They have been to 5 and won 4. Also, not sure what falling short by a combined 4 points matters? A loss is a loss and with it you are not the NC.

Tom is spot on -- UConn has been the best in the tournament this millennium. They don't have the consistency of Kansas, but I'd take those highs with the lows any day.

...and the academic failings, bans and the Calhoun cheating dark clouds? Pass.

All true Jay, and I definitely don't want those negative aspects of their legacy. I should have been more clear -- by lows I meant performance on the court. I love our consistency in year to year court performance, but I'd take a drop there if it was mixed in with the highs of national championships.

I'm probably the odd man out on this, but it's always been my opinion you have to play to win. If you don't make the tournament every year, you don't have a chance to win those years. KU has had plenty of opportunities, it just doesn't always happen. I don't think many fans would be happy if the team won a NC every 10 years and sucked the nine in between. I'd rather think we have a shot at winning every year.

I hope Kentucky fans don't cheer against us in the 2nd round game, that could take the arena from friendly to partisan fast. Anyone else remember the Champions Classic game where the Kentucky fans started cheering for us (against Duke)? They turn out so well they are a boost for whomever they go for.

UConn beat Kentucky two years ago in the title game so I doubt UK fans are going to be partial to either program. 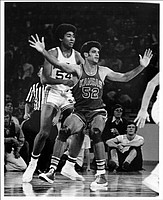 Is that Danny Knight versus Marquette's Jerome Whitehead?