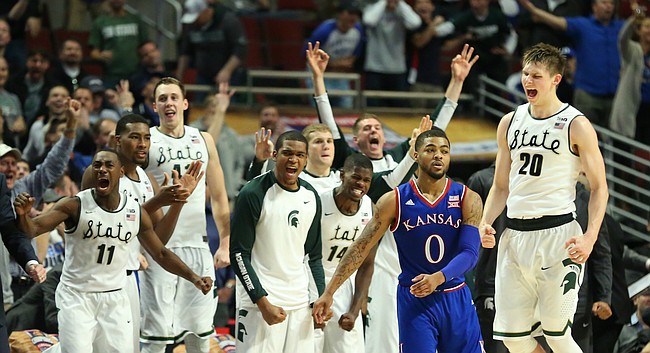 March Madness, otherwise known as presidential primary season, has competition for television ratings now that the NCAA basketball tournament has been born with the release of the brackets Sunday.

A look at Kansas University’s tournament path was not required to predict this will be a good month for the Jayhawks. It only required a look at the history books.

Bill Self, in his 13th year as Kansas coach, has a way of sticking around during presidential election years. In 2000, Self took Tulsa to the Elite Eight. He took Kansas that far in 2004, won the national title in 2008 and made it to the title game in 2012. That’s a 17-3 NCAA Tournament record in election years during his career.

What that says, more than anything, is that Self does such a thorough job of building his roster that the rest of the nation can’t keep him from national-title contention for more than three years at a time. This roster has the look of one that will play in multiple cities, unlike the last two years, which ended in the first city the Jayhawks visited.

Too experienced, too healthy, too free of distractions, the Jayhawks appear primed for a long tournament run and must be included in all conversations about potential national champions.

A look at a dozen schools that could win it all:

Comment: Hottest team in the nation defends well, shoots threes at a high rate and plays its best basketball in the closing moments of close games. Coming off back-to-back second-round losses, Kansas does not have one-and-done freshman distractions as in previous two years, when Joel Embiid (back stress fracture) and Cliff Alexander (suspension) did not play in the postseason. Perry Ellis is looking to improve on a 4-3 record in NCAA Tournament games, and with Frank Mason III playing the best basketball of his career of late, chances are this will be Ellis’ best tournament experience.

Comment: The player with the ball in his hands the most can carry his team to the national title, as UConn’s Kemba Walker and Shabbazz Napier and Duke’s Tyus Jones showed in recent seasons. Spartans senior point guard Denzel Valentine, a 6-foot-5, 220-pound power point guard, averaged 19.6 points, 7.4 rebounds and 7.5 assists led the Spartans to six consecutive victories at the end of the regular season. Izzo’s teams always compete extremely hard, and with Valentine at the controls, the Spartans have a great shot at reaching the Final Four.

Comment: Among players never mentioned in national player-of-the-year discussions, 6-foot-9, 228-pound senior forward Brice Johnson is the best. In order, Michigan State’s Valentine, Oklahoma’s Buddy Hield and LSU’s Ben Simmons have stronger cases, but it is interesting that Johnson tends to be overlooked on a national scale. He’s averaging a double-double (16.8 points, 10.8 rebounds) and abused Duke for 18 points and 21 rebounds in his final regular-season game. Statistically, senior point guard Marcus Paige has regressed throughout his career, but he’s capable of putting together a strong tourney run.

Comment: Inconsistency plagued one of the nation’s youngest teams, but when the Wildcats were good, they were really good, scoring their 13 SEC regular-season victories by an average of 18.8 points. Backcourt tandem of 5-9 Tyler Ulis and 6-5 freshman Jamal Murray capable of taking over games. Keep these regular-season free-throw percentages in mind when Kentucky leads late in games: Derek Willis (.920), Ulis (.850), Murray (.779).

Comment: It takes six consecutive victories to win the national title. Arizona had an early eight-game winning streak and won six in a row late. But do the Wildcats have enough firepower to survive and advance? Probably not, unless talented freshman guard Allonzo Trier, ranked No. 12 in the Class of 2016 by Rivals, catches fire and nobody can put him out. Kaleb Tarczewski, 7-foot, 245-pound senior who surprised Kansas when he chose Arizona, gives Arizona defensive and rebounding force.

Comment: Edmund Sumner, a 6-5, 183-pound freshman, has the quickness and weight of a sub-6-footer and the inconsistency of a freshman. For example, he totaled 41 points in leading Muskateers to consecutive victories against Georgetown and Villanova and then totaled five points vs. Seton Hall and Creighton, shooting 1-for-8 against the Pirates and fouling out in 12 minutes vs. the Blue Jays. Xavier big men are quick and mean.

Comment: They play at a slow pace that can frustrate opponents, a pace not many elite teams employ. Senior Malcolm Brogdon gives the Cavaliers a go-to guy with a soft shooting touch from long range (.411) and the free-throw line (.878). One problem: Virginia won’t be able to play at John Paul Jones Arena, where Cavs have 35-1 record in past four seasons. Bennett took Washington State to Sweet 16 in 2008 and Virginia in 2014. This looks like the year he’ll at least coach in Elite Eight for first time.

Comment: When most think of Villanova, quick guards with long shooting range come to mind, and the Wildcats do have depth in that area, but it’s 6-11 senior center Daniel Ochefu who is this team’s stealth factor. He blocks shots, rebounds and steadily has progressed as a scorer. He arrived in school extremely raw and has worked his way into a complete player. Wing Josh Hart leads the team in scoring and competitive fire.

Comment: Playing the unconventional Mountaineers for the first time can rattle opponents. Not many teams crash the offensive boards as aggressively, and when they don’t gather their misses, they immediately try to steal the ball back with in-your-face pressure. Physical team with enough toughness to win when whistles go the other way. Went 6-3 in Big 12 road games.

Comment: Tallest team in tournament has a starting lineup that stands 6-5, 6-6, 6-7, 6-11, 7-1. It’s tough to score on them near the hoop because of all that length. If the NCAA Tournament brings out best in talented freshmen Jaylen Brown and Ivan Rabb, the Golden Bears could become the sleepers of the tourney.

Comment: The experienced Cyclones have enough offensive firepower to beat anyone in the tournament field and defend poorly enough to lose to any team. They play a fun brand of basketball and have lost enough this year that they won’t carry the burden of high expectations onto the floor with them.

— A previous version of this story included James Blackmon in the Indiana preview. Blackmon is out for the season with a knee injury.

James Blackmon is out for the year with an ACL injury

Iowa State is on this list but Oklahoma is not?