Identifying the 12 players with the biggest shares of the streak is a task as difficult as choosing the 12 biggest insults leveled from one candidate to another during this particularly lively campaign season.

11 Andrew Wiggins: A second-team All-American and first-team All-Big 12 in 2014, Wiggins exploded for 41 points in a loss at West Virginia. His blurry-quick first step and long stride led to many thrilling dunks, and his long arms enabled him to recover with a steal or blocked shot after getting beaten off the dribble. He’s the favorite to become the first Bill Self-coached Kansas player to participate in the NBA All-Star Game.

10 Wayne Simien: He would be much higher on this list if he had participated in more than one of the seasons (2004-05) of the 12-year title run. He earned first-team All-American honors and was Big 12 Player of the Year. 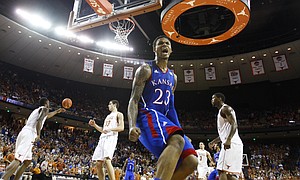 Every Kansas University basketball player who has a Big 12 championship ring from 2005 on has a share in the remarkable streak of 12 consecutive regular-season Big 12 championships. Journal-World sports editor Tom Keegan, in reverse order, attempts to identify the 12 players with the biggest impact on the streak.

9 Jeff Withey: The 7-footer went scoreless in a game at Missouri and failed to chase down a loose ball at the next Kansas practice. Self made him run the Allen Fieldhouse steps while his teammates continued to practice. Withey turned into a beast from that point forward. His wide shot-blocking range enabled Thomas Robinson to concentrate more on rebounding than defending, and they complemented each other beautifully all the way to the national-title game in 2012. The next year, Withey joined McLemore as first-team All-Big 12 and second-team All-American. Two-time selection to the Big 12 All-Defensive squad.

8 Mario Chalmers: He earned Big 12 All-Defensive team honors and was the team’s second-leading scorer to Brandon Rush in each of his three seasons at Kansas. Long before The Shot, he had gained a reputation as being the team’s best shooter with a game on the line.

7 Marcus Morris: A three-year starter who arrived at Kansas as a passive player who didn’t seem terribly interested in mustering the energy to dunk, Morris developed into a nasty competitor who attacked the rim with vicious dunks, had great vision he used to set up teammates and a soft shooting touch down low, at mid-range and on the perimeter. His hands were even softer, and he never bobbled a pass or a rebound. As a college player, he was even better than his brother, Markieff. A three-year starter, Marcus earned All-Big 12 first-team honors as a junior and was a second-team selection as a sophomore. He was a second-team All-American as a junior.

6 Perry Ellis: A four-time state champion in high school and a four-time Big 12 champion for Kansas, Ellis is a three-year starter and two-time All-Big 12 first-team selection. Come out to try to prevent him from scoring from the perimeter, and he’ll blow right by you. Play off of him, and he’ll bury a jumper in your face. Quick and fast, Ellis quietly has had a terrific career.

5 Cole Aldrich: A rugged rebounder and a shot-blocker who covered so much ground, Aldrich steadily improved, all the way to second-team All-American in his third and final season, 2009-10. Two-time All-Big 12 first-team and two-time Big 12 All-Defensive team honoree played with smarts, toughness and for a while with a hockey-goalie mask.

4 Thomas Robinson: The strength and explosiveness were evident from his freshman season, but he was out of control at the start of his career. Developed into Wooden Award runner-up and first-team All-American during his junior season. Played with such power and hustle that he seemed to demoralize opponents.

3 Tyshawn Taylor: The lone four-year starter during the streak, Taylor played 33 minutes eight days after having surgery to repair a torn meniscus. KU had no shot of continuing its conference-title streak without a big freshman season from Taylor. He delivered. KU needed a big-scoring senior season from Taylor, who did not average double figures in his first three seasons, to keep the streak alive. Again, he delivered, averaging 16.6 points.

2 Brandon Rush: He and Andre Emmett of Texas Tech are the only three-time All-Big 12 first-team selections. Rush led the team in scoring in each of his three seasons in Lawrence. His blend of length and quick feet made him a terrific on-ball defender on a variety of different type scorers.

1 Sherron Collins: He played basketball the way late, great Joe Frazier boxed, forever the aggressor, always advancing, never retreating. He played a huge role on all four of his championship teams, going from a wild, super-quick freshman to a senior who didn’t have quite the same quickness because of a knee history and added pounds. He more than compensated with savvy, slicing apart any opponent silly enough to try a zone defense against Kansas. An excellent finisher and shooter, Collins could get a shot whenever he wanted and knew how to dish to teammates after breaking down defenses on relentless drives to the hoop.

Great list! I would've put Russell Robinson in there somewhere alongside Chalmers, maybe ahead of Wiggins. We've had some tremendous players, and I think the streak is in good hands with our returning players. Rock Chalk!

Withey is a great NBA compliment to TRob but at KU he often sat against teams with a perimeter 4 because neither was going very far from the paint.