KU draws Austin Peay in Des Moines; ‘Now is where it counts the most’

Kansas University’s basketball team enters the 2016 NCAA Tournament as the best team in the country as deemed by AP and USA Today pollsters and 10 esteemed tourney committee members. After processing all sorts of numbers the last five days, the committee on Sunday selected KU as the No. 1 overall seed in the 68-team field.

“I think it’s great. (But) I don’t think it means much. I don’t know the difference in any of the 1 seeds,” said KU coach Bill Self, whose Jayhawks (30-4) garnered the No. 1 seed in the South Regional. KU will meet Austin Peay (18-17) approximately 3 p.m. Thursday in Wells Fargo Arena in Des Moines, Iowa. A victory would push KU into Saturday’s second round against either UConn or Colorado.

The committee also awarded top seeds to Virginia in the Midwest, North Carolina in the East and Oregon in the West. 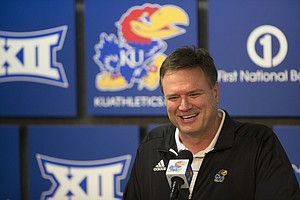 “I guess from a player’s perspective, it would have to mean something going into the tournament that they have done so well that they are thought of being that,” Self added of being overall No. 1. “I was trying to think what it would be like, and it would be kind of like having a stellar high school career, and it’s over, but when you get to college, you’ve got to start all over again and go compete.

“The tournament is a fresh start, and certainly for not only coaches, but players, and you’ve got to perform starting now. All the past has done has put us in position to be a high seed, but certainly now is where it counts the most.”

Self — he watched CBS’ Selection Sunday show with players, coaches and family members in the movie room of new players dorm McCarthy Hall — admitted he was surprised KU was not granted the top seed in the Midwest, where Chicago is the destination following the first weekend.

KU will head to Louisville for the Sweet 16 and a possible meeting with Mark Turgeon’s Maryland team if the Jayhawks win two in Des Moines. Villanova, Iowa and Arizona are possible Elite Eight foes.

“I thought we would go to Chicago, but I’m fine with that,” said Self, who, when requesting information from iPhone information guru Siri was told Louisville was 515 miles from Lawrence and Chicago 448. The NCAA usually sends the No 1 overall seed to the closest site.

Kansas basketball coach Bill Self answers questions from the media after learning the Jayhawks earned the No. 1 overall seed in the NCAA Tournament and will play in the South regional. Self doesn't think KU's players are satisfied with what they've accomplished so far, which he says is a good ...

“I think the only person that’s really disappointed with that is Jamari (Traylor, Chicago native). Jamari obviously would have loved to have gone back to Chicago, but, hey, Louisville is fine. I’ve never been to the Yum! Center (in Kentucky), and I hear it’s one of the best facilities in the country, and so we’ll be excited to be there, if we are fortunate enough to get there.”

As far as the first foe, Austin Peay won the recent Ohio Valley Conference tournament as a No. 8 seed. The squad is led by 6-foot-8 senior Chris Horton, who averages 18.9 points and 12.1 boards and is coached by 69-year-old Dave Loos, who is making his fourth NCAA appearance in his 26 years at the school.

“I’ve known Dave a long time. I think he was an assistant at Memphis when I was just getting started,” Self said. “It’s got to be 20-plus years that he’s been there, and certainly he’s always been a really well-respected, nice guy. His son is assistant coach at Missouri and was Kim’s (Anderson, MU) assistant for a long time at Central Missouri.

“His granddaughter is going through a real tough time right now and just had surgery. She’s in the hospital in New York City. CBS was able to conduct an interview that basically allowed her to tell grandpa congratulations and all that stuff on his birthday, a really neat piece (on CBS on Saturday). And hopefully playing Austin Peay in some way, shape or form will bring attention to the cause and what they are trying to do with his granddaughter (who has rare form of pediatric cancer). But I haven’t spoken to Dave, probably in a year or so. But certainly I’ve always thought he was first-rate. He always treated me very, very well when I was a young guy.”

“We’re nicked up, but who is not nicked up after you do something for four or five months straight every day?” Self said. “We’ll get our batteries recharged. You know, Saturday, Devonté (Graham) and Frank played a lot of minutes (in Big 12 title win over West Virginia), and Wayne (Selden Jr.) did, too. And Perry (Ellis) played a lot, too, those four did. But today off and tomorrow light. I can’t imagine why we wouldn’t have our legs back under us by Tuesday.”

Top seed an honor: KU junior Landen Lucas on the team grabbing the No. 1 overall seed: “I think we were (excited when KU came up on TV),” Lucas said. “There was still a little bit of doubt, but I think that we’ve shown a lot and that’s a great accomplishment. That’s where you want to be. Until it officially gets announced, you just never know. Just like we thought we were in the Midwest, we ended up in the South. We all were pretty comfortable with our resumé and whatnot, and it was just confirmed when we saw that we were the number one oveall.

Kansas senior forward Perry Ellis reacts to the Jayhawks earning the No. 1 overall seed in the NCAA Tournament and says he is entering his final March in a KU uniform with a sense of urgency.

The foe: Ellis is eager to learn a lot about Austin Peay, a school located in Clarksville, Tenn., this week. “They won their tournament, so they have momentum going forward. So just goes to show that every game will be tough,” Ellis said.

Bracket leaked: The NCAA Tournament bracket appeared on Twitter before CBS had a chance to reveal the pairings on its 4:30-6:30 p.m. Selection Sunday show.

According to syracuse.com, the bracket was posted by a Twitter user (with an obscene handle) who has a Kansas Jayhawk logo as his avatar and Royals logo as his background on Twitter.

“We go through great lengths to prevent the tournament field from being revealed early and the NCAA took its usual measures to protect this from happening. Unfortunately, and regrettably, the bracket was revealed prior to our broadcast partners having the opportunity to finish unveiling it. We take this matter seriously and we are looking into it,” said David Worlock of the NCAA in an e-mail sent to media, including the Journal-World.

When I went back to Louisville in January of last year to visit some old friends, they took me to the KFC Yum! Center for a game between Louisville and Virginia Tech. I can tell you for a fact that the arena is indeed a top-notch facility, akin to the Sprint Center. It's a shame that I'm not living there or visiting there now so that, if KU takes care of business in Des Moines, I could see them in person.

Louisville may be 50 miles farther than Chicago, but Des Moines is 300 miles CLOSER than Denver. With our recent bad luck getting out of the first weekend of the tournament, the committee may have done us a favor.

Not sure what Louisville vs Chicago has to do with Des Moines vs Denver. The "second" round sites (can't get used to that) sites are not tied to a regional. Since they went to "Pods" they try to keep the top four seeds in each regional close to home the first weekend. Even if we'd gone to Chicago, we still would have played in Des Moines.

We take this matter seriously and we are looking into it,” said David Worlock of the NCAA.

Yes, we know you take your advertising money for a 2 hour selection show very seriously.

I wonder how CBS is processing the feedback they got with their 2-hour "special". For me, it was horrible. CBS did not provide any unique insights or content that was worth the wait. From what I saw on Twitter, the sentiment was highly (if not completely) negative toward this "milking" of the advertiser dollars. I hope they abandon it for next year and the years after and go back to the quick bracket reveal approach. After that, they can do all the analysis their little advertising dollar hearts desire.

1) Set your DVR for the CBS and ESPN shows.

3) Finish your round, grab something to eat and fast forward the DVR.

They should take it seriously. People pay great amounts of money for that advertisement, so they should get what they pay for. I hope you never own a business and get screwed on an ad deal. It is a big money stakes game, and can cost people jobs.

Self and the Jayhawks should put away talk of Louisville; getting past their second-round game will be difficult again this year.

Agreed. UConn is hot right now but I think the only way they beat us is if we look past them. If we come focused and ready to play for 40 minutes, I think we win by double digits. Hopefully the sting from the last two years' round of 32 games, will ensure we do just that.

I hope Obamarama doesn't pick KU to win NC again. That's been the kiss of death.

I think with the early exits the last couple of years our boys are playing with a chip on their shoulder. They've been questioned a lot this season and they def came through. Ellis wants to leave a legacy in Lawrence, which he already will, but he wants a legacy with at LEAST a final four. ROCK CHALK