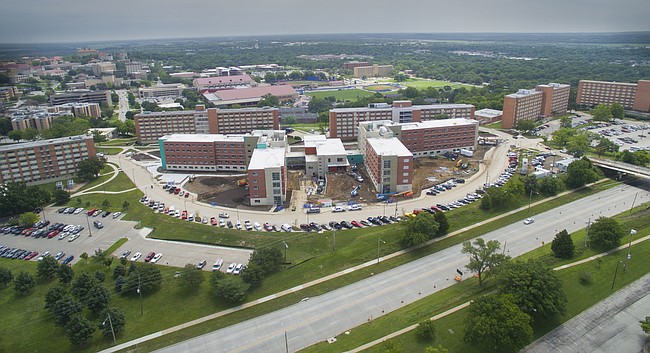 An aerial image shows Daisy Hill with the additions of Oswald and Self Halls during the construction process on Wednesday, July 15, 2015.

A couple who say their daughter was raped in Kansas University’s Jayhawker Towers apartments are suing the university, claiming KU is misleading the public by representing campus housing as safe.

James and Amanda Tackett’s daughter, Daisy Tackett, was a KU freshman when she said she was raped by another KU student in the fall of 2014, according to the lawsuit filed Friday in Douglas County District Court.

“We feel the university cannot say their campus and their dorms are safe unless they really are safe,” Amanda Tackett said in a written statement. “In addition to the horrific assault of our daughter, we are concerned for the safety of all students at KU. We believe there are many more victims of on-campus crimes in the dorms. Had we known this, we would not have considered KU as an option.”

The Tacketts, who said they paid their daughter’s tuition and board, are suing KU in an unusual application of the Kansas Consumer Protection Act.

They say in the lawsuit that KU has repeatedly represented to them and other prospective and current students that university residence halls are safe and secure when, in fact, campus housing for years has been home to “a known, persistent and growing problem of instances of sexual assault.”

They want a judge to rule that KU violated the Consumer Protection Act, order KU to cease representing its dorms as safe until they are “demonstrated” to be, and order KU to give up money earned as a result of the deception, potentially through restitution to affected families, according to the lawsuit.

KU called the allegations an inaccurate portrayal of the environment at the university and its ongoing efforts to ensure students are safe.

"The suggestion that our residence halls are unsafe or that we misrepresent campus safety in our student recruitment is baseless," university spokeswoman Erinn Barcomb-Peterson said Friday, in an emailed statement.

While at KU, Daisy Tackett was on the rowing team and a member of Student Senate.

The Journal-World does not generally identify rape victims, but Tackett wanted her name to be used.

She withdrew from the university early this semester and moved back to Florida, where her parents live, said attorney Dan Curry of Brown and Curry LLC, who is representing Tackett’s parents with law partner Sarah Brown and Tony LaCroix of the LaCroix Law Firm. Both firms are in Kansas City, Mo.

In the fall of 2014, when she was a freshman, Tackett was raped by a male student in a Jayhawker Towers apartment, Curry said. She did not live in the Towers at the time.

She did not file a police report but did file a complaint with KU’s Office of Institutional Opportunity and Access about a year after the incident occurred, Curry said.

Her IOA investigation remains open, Curry said. For that reason he declined to reveal more about the alleged rape.

James and Amanda Tackett’s lawsuit lists several reported incidents of sexual assault at the Towers and KU dorms dating to 2013. It also cites the university’s Clery Act Annual Security Report, which said that of 24 forcible sex offenses reported at KU in 2014, 16 occurred in dorms.

During the same years, according to the lawsuit, KU posted online content stating that “students enjoy living on campus because it is convenient, safe, and affordable” and describing KU and its campus housing as a “safe community” where “security is a priority.”

The lawsuit does not demand a set amount of money from KU.

“The Tacketts are focused on the equitable relief part of this,” Curry said. “They want to see changes made.”

She said the university also goes beyond the minimum requirements of federal law by providing an array of sexual assault prevention and education resources. Those include mandatory online training, bystander intervention programming, campuswide campaigns and the recently opened Sexual Assault Prevention and Education Center, Barcomb-Peterson said.

"National data demonstrate that traditional college-aged students are at increased risk of sexual assault — meaning the issue of sexual assault is not unique to KU or any other institution," she said. "That’s why the University of Kansas goes to great lengths to prevent and address sexual assault, not just in our residence halls, but across our campuses and throughout our community."

But a class action suit related to sexual assault in campus housing is unusual, if not unprecedented, attorneys said.

“We’re kind of applying the same logic to housing,” he said. “If they’re going to say that they’re safe in their advertisements when they know that they’re not totally safe, then that runs afoul of the law.”