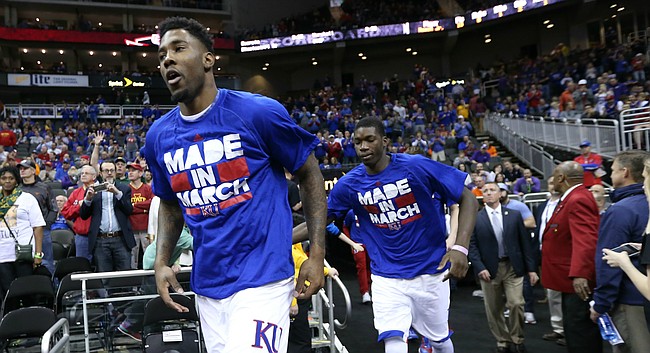 Tough break. Yesterday would have been a great opportunity for extended minutes. There's always Austin Peay to cut your teeth on, though.

The key word in this article is "our" which Bill Self used in reference to Clyde Lovellette when he described the significance that Mr. Lovellette had to himself, his family, and "our" school.

For Coach to refer to KU as "his" school says volumes about why we are so blessed to have him leading the basketball program. Oklahoma State is his alma mater, but KU is his home. Rock Chalk!

Self has a Masters from KU so he is officially a KU alum as well.

You don't even need to be a student, much less a graduate, to be considered a member of the alumni. Former employees and even contributors (donors) are also considered alumni.

Don't want to make too much of this but after seeing Diallo sit all but 1 min. in the second game after not playing in the blowout against Kansas State, I think HCBS sees Bragg as the feature player in the upcoming seasons.

Watching Diallo, I could feel there was some level of resignation in him and his future at Kansas. I could be totally off base but while Bragg's game has continued to improve, Diallo has never repeated his performance in his very first game.

I'm hoping Diallo comes back next year with the attitude that he needs to prove something to the coaching staff and the fans.

I do know that Diallo suffered an injury to the face but his minutes seem to have been trending downwards well before the injury.