Kansas University sophomore Smith Hinton won her match at No. 2 singles to break a tie, and the Jayhawks defeated Baylor, 4-3, in Big 12 women’s tennis Wednesday at Jayhawk Tennis Center. 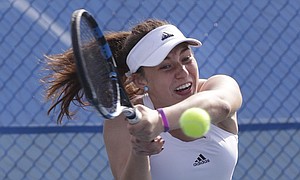 Kansas University freshman Anastasiya Rychagova hits a backhand in the Jayhawks' 4-3 victory over Baylor on Wednesday, March 9, 2016, at the Jayhawk Tennis Center.

“It was great to come back after facing some adversity today,” KU coach Todd Chapman said. “I just look back to Sunday when we were in the same exact position with some of the same girls on the court, and it didn’t go their way on Sunday against Denver, but thankfully it did today. We’ve talked a lot about facing adversity since Sunday. The girls weren’t happy with the way they handled their composure. I wasn’t happy the way we handled it because we weren’t composed and we’ve talked for several days about wanting to get into that situation and handle that opportunity the right way. I thought we did a fantastic job. We played to win today.”

Kansas will travel to Houston to play Tulane on Saturday and Houston on Sunday.