Lovellette, the fourth-leading scorer and 11th-leading rebounder in KU history who had been battling cancer, was 86.

The 6-foot-9 two-time consensus first-team All-America center scored 33 points and grabbed 17 rebounds to lead KU to an 80-63 win over St. John’s in the 1952 NCAA championship game. In the process he set a then-NCAA Tournament scoring record and earned most outstanding performer honors.

Also in 1952, Lovellette and six Jayhawk teammates helped lead the United States to the gold medal at the Olympics in Helsinki, Finland. Kansas coach Phog Allen was an assistant coach on the team. 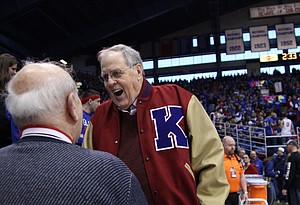 Kansas great Clyde Lovellette is greeted by an old friend Greg Kallos, from Kansas City, Mo., upon his entrance to Allen Fieldhouse on Saturday, Feb. 11, 2012. Lovellette and other members of the 1952 team were in town to be honored and celebrate the 60-year anniversary of their championship win. 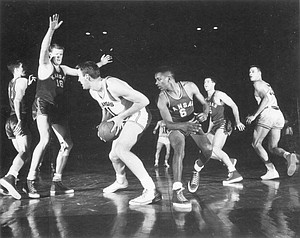 “Clyde’s passing is a big loss for anyone who has ever supported Kansas Athletics,” KU coach Bill Self said Wednesday. “He was a great player, a national champion and Olympic gold medalist. He was a beloved teammate and a great ambassador for his alma mater. Our thoughts and prayers are with his family.”

A native of Terre Haute, Ind., Lovellette became the fourth Jayhawk to be named a consensus first-team All-American and was also named All-Big Seven in 1951 and 1952.

Following his career at KU, Lovellette played one year of AAU ball, then embarked on a 12-year NBA career with stops at Minneapolis, Cincinnati, St. Louis and Boston. He retired from basketball in 1964. Lovellette was a four-time NBA All-Star and won three NBA titles — in 1954, 1963 and 1964.

Lovellette also is a member of the Indiana Basketball Hall of Fame. The Indianapolis Star spoke with Lovellette in January. He revealed that in the previous year he’d fallen ill with lymphoma, then contracted stomach cancer. In December of 2015 he fell and broke his neck.

At his induction ceremony in 2012 in Kansas City, Lovellette said: “There are too many people to thank for being enshrined in the Hall of Fame. It’s always an honor to be inducted to a Hall of Fame. It’s always great to be represented in basketball. That’s been my life ever since I could bounce the ball. Playing for a great coach like Phog Allen and being with a group of guys like Bill Lienhard, Bill Hougland, and Bob Kenney, those are the people that really make the team.

“Without a staff around you, I wouldn’t be here. I don’t believe one man can win any ballgames. They can have a big impact, but the other four men that are with him, that’s where you develop team play, camaraderie and the real togetherness to win a ballgame.”

Lovellette was proud of his KU years.

Lovellette will be forever remembered for his 33-point effort off 12-of-25 shooting in the title game vs. St. John’s.

“Leaving everybody else open and collapsing on Clyde lasted about a half,” teammate Lienhard told the Journal-World in 2010. “They opened it up, and Clyde got a bunch of points.”

Lovellette, who returned to Lawrence in 2008 for the 110 Years of KU basketball reunion, once was asked by the J-W which games meant more: playing Missouri or Kansas State.

“Both. I don’t know if I hated them (Tigers) but it was a tradition that you did hate them. You’d get on the court and just play,” he said.

Teammate Jerry Waugh told a humorous story about Lovellette in December on Bill Self’s weekly “Hawk Talk” radio show. Waugh recalled he and Lovellette appeared on a radio quiz show, “Break the Bank,” on a trip to Boston to play Holy Cross in 1949.

“We won $100 on the show. I gave my half of the $100 to my teammates and Clyde kept his,” Waugh said with a laugh. “When Doc (Allen) found out about it he made Clyde share with the rest of the guys. That’s when Doc said, ‘The Big Turkey gets all the grain.’ That’s the story about Clyde (that he gets teased about).”

On a serious note, Waugh said: “Clyde’s a good guy, a friend and friendly person and a lot of fun to be around. He was growing up as a young man.”

For sure, he's no longer in misery. I am happy for him.

Hope that KU wins the championship this year and dedicates it to Mr. Lovellette's memory. How fitting that would be.

The end of a storied life and great Jayhawk. A sad day for Jayhawks everywhere. Condolences to his surviving family and friends.

BTW, contrary to the article (which originally came from KU Athletics), according to the current media guide, Big Clyde had 839 career rebounds, and is actually #11 on KU's all time list today, between Scot Pollard in 10th place with 850 and Dave Robisch in 12th with 815. I am only aware of this because Perry Ellis is close to passing Dave Robisch on the career rebounds list (Perry has 799), and has a shot at passing Clyde -- and perhaps even Scot if he plays really well -- if KU plays deep enough into the postseason.

Remember listening to the radio and cheering our Jayhawks in 1952 to win the championship. Then the Olympic trials and still remember Clyde missed a close shot at the end of the game but seven players got to go to the Olympics which all of them gained a gold medal. Would be nice if they could play the upcoming tournament with a uniform used then in honor for Clyde.

Probably won't; they're contractually bound to wear those "Made in March" uniforms issued by Adidas. But perhaps they could have a black patch with the number 16 on their jerseys.

RIP Clyde! You were a true legend. Growing up in Topeka, I heard so many stories @the 1952 team (year I was born) that I had no choice but to be root for the Jayhawks over the Wildcats.
Rock Chalk

Huge downer. I hope our team wears an emblem honoring Clyde during the tournament. Obviously I dont remember seeing him play, but I respect the legends of Kansas basketball. Ive seen interviews with Clyde (one done on Metro Sports was excellent) and though he was a transplant from Indiana where the Hoosiers wanted him greatly, he chose Kansas and came to love the Jayhawks. We love you back, Mr. Lovellette! Say hi to Forrest Allen.

Clyde got the nickname "Big Turkey' but was also given the name "Big Stork" after he helped with my emergency delivery on February 7, 1952. I still have the cute story the LJW wrote in 1952. Clyde was riding with a friend ambulance chasing when the ambulance pulled over and didn't make it to the hospital in time for my birth. Clyde helped and carried me into the hospital. My Dad was a policeman and I was reunited with him at the police station at 5 years old. I'll never forget when he bent down to pick me up I was so scared because of his height. Such a gentle, kind giant! A true legend! You will be greatly missed, Clyde.

I met him in 1998, during the 100 years of Kansas Basketball celebration. The Monster of the Music Hall was a gracious gentleman.

One of the all-time Kansas greats! You won't be forgotten Cylde.

Clyde was freshman when I was a senior and was his tutor for a Botany class. He was a true gently giant, good humored and friendly. Doc Allen reported that he was attracted to KU because the altitude of Mt.Oread was good for his asthma. He keeps company with only a few who held rings or medals for the NCAA, Olympics and NBA championships. You were a great treasure, JR. RIP.

I have this from a very good source that Phog realized back then what most college coaches know now, which is you not only recruit the kid but also you recruit the kid's mom. Phog had heard that in high school Clyde suffered from a respiratory problem that is now termed athletic asthma. In speaking with Clyde's mom he reassured her that Clyde's condition would improve dramatically playing in the "rarified air" of Mount Oread. I think he painted a verbal picture that Mount Oread was nestled in the Rocky Mountains.

A true legend and a great man. I was fortunate to get to shake his hand at a game a few years back. He could not have been more humble or nicer to me and my family

Still the only player to lead the NCAA in scoring and win the title in the same year.

Sincere condolences to the Lovellette family. Clyde's was a life well lived.

I'm with Joe, it would be very fitting for our team to wear a #16 patch or some emblem during the tournament.

So many great memories and stories. Thanks to all for sharing.

What a heavenly team - - Clyde, Doctor Allen, Wilt, Maurice King, Dean Smith, and all of the other KU legends who have left us, but who are waiting on us to reunite with them someday for a big Rock Chalk chant. Am looking forward to it.

We will miss you. May you grace the courts in Heaven!