Kansas tight end Kent Taylor (81) comes down with the ball on his helmet after being taken off his feet by Rutgers defensive back Kiy Hester (2) during the first quarter on Saturday, Sept. 26, 2015 at High Point Solutions Stadium in Piscataway, New Jersey.

A couple of well-known names from rosters past no longer appear on Kansas University’s most recently updated football roster.

Tight end Kent Taylor and linebacker Schyler Miles, both Florida natives who had one year of eligibility remaining, will not be back with the Jayhawks in 2016.

Second-year KU coach David Beaty had nothing but good things to say about both players and added that each did what was best for him.

In Taylor’s case, that was to leave the program to return closer to home.

“I hated it,” Beaty said. “Because I loved him. I didn’t want him to leave. I wish him the best of luck and I hope it works out for him.” 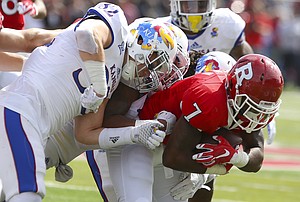 As for Miles, his departure was simply a case of a career full of knee injuries catching up with him.

“That poor guy. I tell ya, I don’t know if I’ve seen a guy more banged up than Schyler was,” Beaty said. “Between his knee and his hip, that guy has been through it now. His knee is in bad shape.

“He and his parents, we all thought it was in his best interest for him to be done. He was just hurt. It would’ve been unfair for us to ask him to continue on because he really couldn’t.”

Former defensive lineman Tyler Holmes also no longer appears on KU's roster and, like Miles and Taylor, it is believed he left the program on his own for personal reasons.

Beaty and the Jayhawks will take today off and get back to work Tuesday for practice No. 2 of the 15-practice spring session.

More from Day 1 of spring football:

So how many scholarship players are we down to now? Like 60?

Because we didn't sign a full class (25) it actually opens things to senior transfers, ;right signings, and such.

We lost less than 25 seniors, so we should be adding to our numbers, even if just slightly.

I'm hearing quite a bit about recruiting efforts. Encouraging to me.

I think we have one more year with a little less than a full allotment of scholarships but it would be as bad a last year. The following year, I think we will be back at a full 25. HCDB is doing everything he can with the hand he was dealt and doing it very well. I think the future is brighter --

At this point it only has one direction to go.