Kansas University guard Lauren Aldridge (3) drives to the basket between TCU guard A.J. Alix (23) and center Jordan Moore during the Jayhawks’ 81-64 victory in the Big 12 tournament on Friday in Oklahoma City.

Tenth-seeded KU shot a season-best 54.7 percent from the field and put away No. 7 seed TCU, 81-64, in the first round of the Big 12 tournament at Chesapeake Energy Arena. 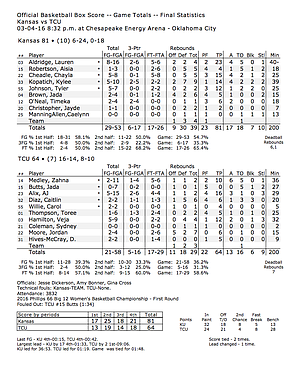 “Well, you know, we’re such a young team,” KU coach Brandon Schneider said. “I really think we’re probably the youngest team in the country in the Power Five conferences … start three freshmen, two sophomores, new staff. But, again, I really think … you know, we’ve gotten better, and when you’re not having a very good season, it would be very easy for those young guys to quit and start looking forward to next season, but they’ve really stuck with us.”

“I thought we did a great job of preparing for this game, and we came in with the mentality that this is going to be our game that we’re going to win,” Cheadle said.

Sophomore guard AJ Alix led the Horned Frogs (16-14, 8-10 Big 12) with 16 points and a perfect 4-for-4 from the free throw line. TCU’s all-time leading scorer, senior guard Zahna Medley, was held to 10 points on 2-of-11 shooting, but tallied a game-high six assists. Senior guard Veja Hamilton came off the bench to contribute 12 points.

“I think we are going to use all the energy we can get playing against Texas,” Aldridge said. “We are excited about the opportunity. Like the Big 12, we see them … we have seen them twice this year. So we’ve got to see what happens, but we’ve got to come with a lot of energy, though.”

That's good progress for next year when we'll also be adding some veteran transfers.

Shows what kind of a coach Brandon is. Most teams who had a rough stretch would have had no fight at this point. However they keep fighting. Once he gets his bigs in place through recruiting watch out.