DUBLIN, OHIO — Former Kansas University golfer Gary Woodland is tied for the lead entering the final round of the Memorial.

Matt Kuchar finished the third round in a share of the lead, just how he started Saturday.

But it was a wet and wild ride for Kuchar and everyone else at Muirfield Village.

Kuchar fell off the pace quickly with two bogeys, only to surge back into the lead with four birdies and two par saves in a six-hole stretch. A bogey on the final hole gave him a 2-under 70 and a share of the lead with Woodland (69) and William McGirt (64).

Twenty players were separated by four shots going into the final round.

Jason Day was right there until a double bogey on the final hole for a 68. He still was only three shots behind. Rory McIlroy was five back.

Woodland and McGirt are among dozens of players who face 36 holes of U.S. Open qualifying Monday, but they can take care of that with a victory, which would put both well inside the top 60 when the cutoff falls a week later. A victory for Scott Brown, three shots back after a 69, likely would do the same.

“I’m feeling pretty confident about where my game is,” said Woodland, who has made only one bogey in 54 holes at Muirfield Village. “I’ve been playing well for a while, and it’s starting to come together.” 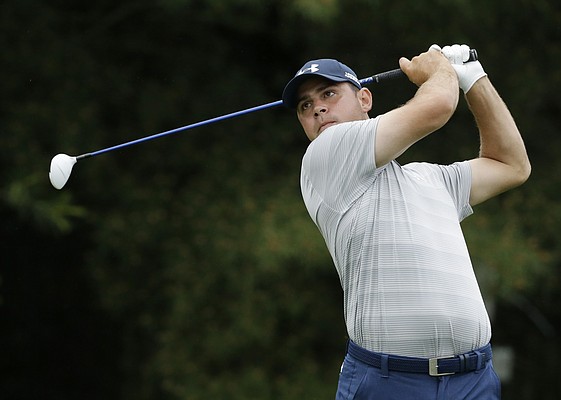 Gary Woodland watches his drive on the 17th hole during the third round of the Memorial golf tournament, Saturday, June 4, 2016, in Dublin, Ohio. (AP Photo/Darron Cummings)