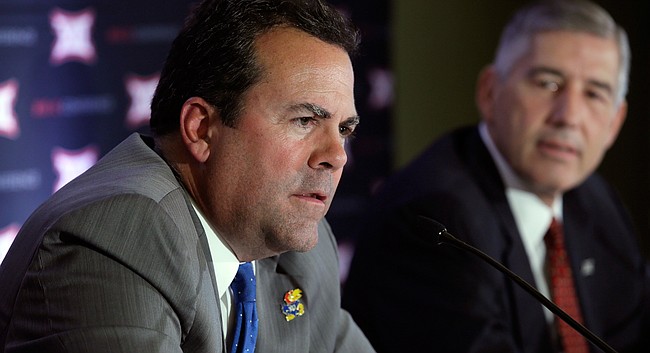 Fresh off of his final meeting as the chair of the Big 12 Conference athletic directors, Kansas University AD Sheahon Zenger returned to Lawrence late Thursday night from the Big 12’s spring meetings in Dallas and landed with the same feeling as many of his cohorts.

“In my five and a half years in the league, there’s never been greater camaraderie, collegiality and sharing of information and we’ve never had stronger leadership than we have now,” Zenger told the Journal-World.

Proof that such vibes go beyond words and feelings into the realm of actually getting things done came Friday afternoon, when the Big 12 announced that it had voted to bring back a conference championship football game in 2017. Big 12 commissioner Bob Bowlsby said the conference likely would move into two five-team divisions and keep its round-robin schedule but added that final details still needed to be ironed out.

The plan was presented by the conference athletic directors to the Big 12’s board of directors on Thursday and, according to Zenger, was received incredibly well.

“The best news out of this week was two-fold,” Zenger said. “One, there was great out-of-the-box thinking amongst the ADs regarding the championship game, it was shared with the board, who received the information quickly and then acted on it. The second thing is the Big 12 just distributed a little more than $30 million apiece to its members, which is third among Power 5 conferences.”

That total distribution of roughly $304 million, up 20 percent from $253 million in 2015, put talk of the importance of a potential Big 12 network closer to the back burner.

“What gets lost in that is we all still own our own third-tier media rights,” Zenger said. “It’s monetized in different ways by each institution, but each institution benefits a great deal through exposure of its teams that way, as well.”

Although Friday’s vote to reinstate the title game certainly qualified as big news, Zenger said the week’s worth of meetings were not nearly as intense and enormous as they were made out to be heading into the week.

“The public perception of these meeting is somewhat inaccurate,” Zenger said. “These are meetings we have every year at this time to do end-of-year, houskeeping business to set the table for the next academic and athletic year. We go into these very measured and ready to receive information and data that is presented to us on behalf of the conference. And only after thorough review of that information will we move in one direction or another.”

Zenger reiterated that, with items such as possible expansion, which remains an ongoing discussion, and the creation of a Big 12 network on the agenda, that last part was more important than ever.

“These are very important decisions,” Zenger said. “And none of this can be taken lightly.... “It’s critical that we don’t approach these issues from an emotional vantage point. This requires great clarity of thought and mindfulness.”

Zenger will serve out his rotation as the chair of the conference ADs through the end of the month and then will pass the torch to TCU athletic director Chris Del Conte on July 1. Zenger added that, with so many hot-button issues being discussed, the league’s athletic directors agreed to let Bowlsby be the voice that speaks for the Big 12 on any major happenings.

That said, Zenger offered to sum up the week — and the current state of the conference — with one short-but-sweet statement.

“In many ways, things are really pretty good right now,” he said.

Without getting rid of the Longhorn Network in favor of a B12 Network and expansion to at least 12 teams, the Big 12 will not survive past the expiration of the current TV deal.

What should Zenger be doing differently?

Robert - You need to go scan the KCStar site for the article by former LJW writer Jesse Newell documenting his meeting with Dr Z. It has the damm impressive list of accomplishments for Dr Z's first 5 years, as well as a glimpse at the scenario that he inherited (potential Title IX lawsuits over facilities) and corrected. Dann impressive.

Please get us of this Longhorn/Baylor loser dead conference hell.Lets join a conference with a future and a conference that are not selfish and share wealth and want all to succeed! Pac-12 is that home!If Misery can get a SEC bid we can get a Pac home!

No to the PAC 12. Going east is the answer unless you want midweek basketball games tipping at 10pm in Lawrence and ending after midnight.

Big 10 is where KU needs to look and go east.

Yeah the Big 10 is just like the Big 12 in that Ohio State is the bully like Texas is in the Big 12.No thanks for Big 10 though!

Really you would worry about time difference who cares about that when that conference treat teams equally! That is just foolish! I bet they would work out something that would benefit both of us!

You do realize Cal and Stanfird run the PAC 12 and are the sole reason why BYU and Boise St. will never join tge league. Their conference network has also been a complete flop unlike the Big 10 Network in which schools are making about $10 million/year more than Bug 12 schools and are getting ready to sign a new deal in the next couple of years that will dwarf what the Big 12 doing right now.

Cal and Stanford have more clout in the PAC than USC and UCLA?

I don't like either choice but I agree with Aaron that the Big 12 needs two additional teams and have a BIG12 Network and not the Longhorn Network.

Dude Texass will not give up on the LHN and have poo pooed a Big 12 Network!

Things may be "pretty good" in the league, but KU football is dead in the water until Zenger does something about anachronistic Memorial Stadium. See Jesse Newell's story in The Star.

I read Jessie's article and can't see anything happening with the stadium for years....at-least a decade. We will need around $300MM for the project, which would make this a University project and the need for a lead sponsor (i.e. Drayton McClaine - Baylor) such as the Koch Brothers.

We will never get that so long as;

1) the University is under the leadership of Gray-Little.

2) we are in a league with UT and the LHN, we will never get the needed league shareing revenue to finically support a stadium projects.

Additionally, the world is in the midst of a materials revolution that would materially affect the cost of construction. Building something significant now may be akin to buying a nice horse and carriage in 1908 for the best mode of transportation. A few years down the road the Model T Ford came onto the market.

I admit to not knowing much about the Materials Revolution other than googling several sites and came away not much better than when I started but unless there is a major shift in how we build stadiums that would make a new stadium obsolete, I'm not sure how your horse and carriage to the Model T Ford comes into play.

As I said Suzi, I really can't agree or disagree as it is a subject I don't have enough knowledge to make an informed opinion.

I know several new stadiums are currently being built. In Atlanta, they are building a brand-new football stadium about 25 years after the Georgia Dome opened. In Los Angeles, they are planning to build the most expensive sports complex ever, currently called the NFL Disney World. The Miami Heat built a 2nd new arena after only 11 years after the first opened. Texas has several high school stadiums that approach $60 million.

I don't see how Kansas will be able to compete in football with a stadium about to celebrate its 100th year. Kansas needs to find a corporate sponsor. The Koch Brothers Stadium sounds pretty good. Better than Paige Sports Arena. Maybe Walmart wants a second chance?

Do some research on Graphene...it has a theoretical tensile strength of 300 (GPa) giga-pascals...stainless steel is about 500 MPa (mega-pascals). Applications are rapidly developing. Unbelievable construction applications are being developed but since there are no major manufacturing operations, yet, cost very high.

In 20 years there will quite possibly be no college football... Building KU Athletics future around it seems short sighted.

Jayhawk basketball is one of the strongest brands in college sports. KU will be fine.

If football success means a team full of criminals and situations like Baylor, Arizona, LSU, Okie State, Alabama, Auburn ... and the Weis recruits ...I'll take a pass with football. I love the game but there are limits.

It's far easier to support to the Self led Kansas Basketball program, which enjoys massive successes while graduating it's student-athletes and maintaining a consistently excellent APR, Overall Kansas does an admirable job with their APR, ranking 9th best nationally..

Perhaps we should start investing in a soccer program. That might be the future of college athletics.

Gary Woodland tied for the lead at the Memorial!!!!

Close it out GW!

Look at Louisville they were a 1 trick pony for a long time! look at them now they compete in everything Louisville is the school to emulate!