Minnesota Timberwolves guard and former Kansas star Andrew Wiggins waits in line with the campers for his turn to shoot during his and Ben McLemore's Kansas All-Star Basketball Camp on Thursday, July 14, 2016 at Sports Pavilion Lawrence.

Andrew Wiggins, who spent just one year in college, figures to be a walking, talking advertisement for Kansas University’s basketball program for some time to come.

“College will always be my favorite time, my best time in my life,” the 21-year-old Wiggins, who has completed two seasons with the NBA’s Minnesota Timberwolves, said Thursday in his first appearance in the area since August 2014 when he co-hosted a camp with KU coach Bill Self at Shawnee Mission West High School.

“Just being on the campus, hanging out with my friends and everybody else, the games, the fieldhouse, everything ... it was amazing. (I don’t know if there’s) anything that compares to it. Nothing beats it; it can only tie,” Wiggins added. 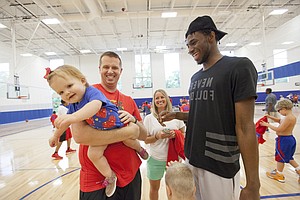 “College teaches fundamentals and the basics of the game. Coach (Bill) Self taught me a lot, whether it was help-side on defense, cutting without the basketball. There’s a lot of different things. Even getting at it defensively. He always challenged me to do better and be better,” stated Wiggins, who said he talks often with Self and KU assistant Kurtis Townsend as well as some of his former teammates.

“I feel I could have done a lot more things on the floor. I think I depended on a lot of different stuff in college, whereas in the NBA it’s a lot different,” Wiggins said.

The No. 1 overall pick in the 2014 NBA Draft says he’s looking forward to seeing his former KU teammate, Joel Embiid, make his NBA debut during the upcoming 2016-17 season. Embiid, who was selected third in the 2014 draft, is expected to finally be healthy and play in games.

“I think he can come in and impact the game instantly,” Wiggins said. “He could have done that the first year, but unfortunately he wasn’t healthy (foot surgery). He’s getting back to it. Hopefully he can play this year, and when he comes in he’ll take the league by storm.”

There are high hopes for the Timberwolves, following the hiring of former Chicago Bulls coach Tom Thibodeau. Karl-Anthony Towns, like Wiggins, is a rookie of the year winner, with the likes of Ricky Rubio, Zach LaVine, Gorgui Dieng, Shabazz Muhammad and current first-round pick Kris Dunn also on the roster.

“The main thing for me is making the playoffs with my team,” Wiggins said. “We’ve got a nice young core, new additions. We’re looking forward to a bright future.”

“It’s wonderful,” Wiggins said. “I’ve got more than one Jayhawk on the team now. The best thing about it is now we get to play in Sprint Center, preseason (Oct. 8 vs. Miami). We get to play in front of the home crowd. I’m looking forward to it. I’m excited. I know they (Rush, Aldrich) are excited, too.”

Members of KU’s current team figure to be in the stands for that one, including top-rated prospect Josh Jackson, a 6-8, 207-pound wing who has been compared to Wiggins.

“He’s an energized guy. He can play,” said Wiggins, who once worked with Jackson at a camp in California. “He can score the ball. He’s long. He can defend. He’s big. He has the type of game that translates well to the NBA.”

Summer league: Former KU guard Brannen Greene had no points with two turnovers in four minutes in Memphis’ 89-85 loss to Minnesota on Thursday in NBA summer-league action in Las Vegas. … Kelly Oubre scored 22 points off 8-of-18 shooting (3-of-6 from three) in Washington’s 71-60 win over Atlanta. … Perry Ellis had two points off 1-of-7 shooting with one rebound in 10 minutes in an 86-73 loss to Chicago.

Andrew Wiggins reflects on how season at KU prepped him for NBA by KUsports.com

Nick, what a great top photo. Just proves that there is still a lot of "kid" in AW!

I agree Tony! Nick Krug's photo of AW as one of the "guys" is a Classic!

Wow. Perry and Btannen might be working their way into desk jobs. Forget about Euro-ball much less the NBA.

How can this be? Joe Ross was adamant that Ellis and Harrison Barnes are essentially the same player. Barnes just signed a max contract with those same Mavericks. Surely Ellis has the same future ahead of him.

Where is Joe Ross anyway?

WTF is wrong with you? The same post about a hundred times - out trying to pick fights. Such a complete a-hole. You almost seem to revel in the prospect of an all-time great Jayhawk possibly failing at reaching his dreams.

Hi Brett. It's better that you stick to purely insulting people. You only look pathetic and angry that way. It's when you try to make intelligent comments that things go really bad for you.

I truly wish for Ellis' sake that he had an NBA game. He's a wonderful young man. I also wish I could win on the PGA tour. Neither is reality. That doesn't mean I revel in either. Dirk was the one making the pointed comment about Ellis maybe not playing Euro ball. Did you forget to unleash a hateful tirade at him?

Good luck against Chris in the Forrst Gump Cup debate.

Come on, Jay. I almost always enjoy your posts, especially most recently as you have offered some very beneficial insight. However, this dispute between you and Joe is getting a little old. I respect you both for your knowledge and analysis, so please just "agree to disagree" on the other items.

I think we all can agree that Perry is a quality individual and that we hope his future is filled with many bright and challenging ventures, even though, like you, I don't really believe that it will be in the NBA. Maybe there are even bigger things in store for Perry throughout the rest of his life than just basketball. He deserves it.

As for AW, it is so refreshing to see the respect and loyalty that past Jayhawk players have for Coach Self and his staff. The same was true with Roy Williams.

KU has been so blessed to have such wonderful tradition and leadership in the basketball program. I just hope that the day will come in my lifetime when the football program will get to a competitive level of respectability again.

There is no dispute between Jay and Joe. It's just Jay stalking, trolling and being an emaw.

And here you are, trolling and stalking me....Best of all, you think that mocking KU hating Chicken Littles makes someone a KSU fan.....

You must have really believed your comment from the other day where arguing with yourself meant that you had a chance at winning....

I agree to disagree that Ellis isn't a carbon copy of Harrison Barnes. That was never an issue. I can agree with Joe that Italian wine is actually imported, another of his brilliant ideas. Agreeable is my middle name.

Sadly it seems that the shame of his nonsensical comments drove Joe away. He was truly entertaining. Joe has the self awareness that Brett lacks....