Tucker Vang, who practiced daily against the Kansas University women’s basketball players last season as a member of what’s known as the “Dream Team” now will live a dream as an official member of the men’s squad.

Vang, a 6-foot-1 junior out of Goddard High, has been added to the men’s team as a non-scholarship walk-on.

“He’s been a KU fan his whole life. He was a big KU fan in high school. We always joked about that, anytime KU and K-State played,” said Goddard High coach Kyle Taylor, who played for coach Jim Woolridge at KSU in 2004-05 and ’05-06.

Vang, who was named first-team all-Ark Valley Chisholm Trail League as a senior in 2013-14 after averaging 16.5 points, 4.5 rebounds and 2.8 assists a game, is brother of Tate Vang, a freshman walk-on on KU’s football team. Their dad, Pete, played football tight end in the early 1990s at KU.

“He will love being part of it,” Taylor said of the KU hoops program. “He’s been trying three years, I guess, to work his way onto the team. It’s been a lot of hard work. He was with the women’s practice team and worked his way up to where he got on. He will be a great walk-on, do whatever he can to help the team out.”

Tucker Vang also was a standout wide receiver/defensive back at Goddard High. 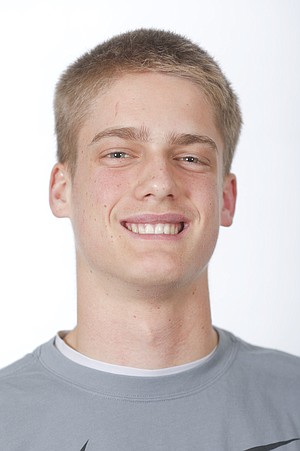 “He was a three-year starter for us (in basketball),” Taylor said. “He really did a good job as leader for our group. He always played hard, is a good kid. He’s somebody coach (Bill) Self will love to have around.”

Both Self and Vang cannot comment until the compliance office gives its OK following the review of paperwork. Self did confirm Tuesday morning Vang was expected to join the squad. Later in the day, sources close to the program said it indeed was a done deal.

“He’s a good shooter,” Taylor said of Vang, who hit 46 percent of his shots and 30 percent of his threes his senior year at Goddard. “Being a little older and not being a freshman right out of high school will be a huge advantage for him. He’s more mature. He’s not going to be shocked. He’s going to know what to expect. Playing for the women’s practice team and at the rec center he’s developed his game and matured a little bit. It’ll be exciting to see if down the road and after a year see if he’s one of those guys who can squeeze in a few minutes.”

It’s not known whether Vang will play two or three seasons. It appears he does have a five-year window available if he wishes to play three.

KU has three non-scholarship players on the team: Vang, senior Tyler Self and junior Clay Young. KU coach Self at this time does not envision adding any more walk-ons.

Good luck, Tucker. KU has a fine tradition with walk-ons, and they have played significant roles in the past. Welcome!

Great to see another player from Goddard HS. The last one, to my knowledge was Ken Koenigs in the '74-'78. Good luck.

How many teams have a noun, an adjective and a pronoun as their walk- ons??

Well, Vang is almost a noun!

It’s not known whether Vang will play two or three seasons. It appears he does have a five-year window available if he wishes to play three. http://eurosports.mobiletv.com.pk/

I'm sure Vang is a delightful young man and will do an exemplary job in scout team work.

On a more exciting note, a debate between Brett McCabe and Chris Shaw is being negotiated. Brett will simply take one of the sides of an argument Chris is having with him/herself and continue in his unique fashion. These two evenly matched intellectual combatants will vie on pay per view for the newly donated Forrest Gump Cup.

IMG is being considered for broadcast and promotion. Stay tuned.

Jay, surely you have a place in that debate!! My only complaint is the styles get needlessly caustic. Keep the debate to the facts, active listening, and a respectful tone.

If someone goes off the rails and is not factual, won't listen and disrespectful, don't invite them to the debate and tune out until they change their style.

Suzi. It's nice that you feel that way. If you ever find that I'm factually inaccurate I fully expect that you'll provide a wise counterpoint in your usual charming manner. Based on your track record of civility I'm sure that we'll find the truth, or at least agree that we have different versions of it.

That's your approach and your choice. Here in free America, it's a right we all share to mock someone that "is not factual, won't listen and disrespectful" if we choose. Based on their track record, The Forrest Gump Cup contestants earned this mocking.

That's my preference. It seems to be others' also.

You know we agree on most topics about Kansas basketball and others issues. There is a group that get a bit caustic, although I fully understand where you are coming from.