The greatest team in the history of Kansas University volleyball gathered for a banquet Sunday in the Horejsi Family Athletic Center without a hint of conceit in the air.

The only thing reaching the Final Four for the first time in school history seems to have changed is the program’s ever-rising expectations. Those were put on hold for a day to reflect on an amazing season.

Head coach Ray Bechard didn’t need a script to trigger memories he shared from a podium. 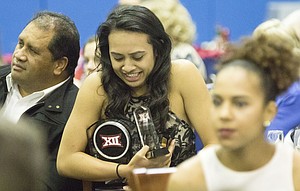 Bechard quoted the KU volleyball play-by-play man’s line about All-American Kelsie Payne, the high-flying sophomore who puts amazing velocity on her shots: “Kelsie Payne has no regard for human life.”

“It’s very a rare a team that does not get to the final has a player on the all-tournament team, but the best player there was Kelsie Payne,” Bechard said.

Payne and Big 12 setter of the year Ainise Havili are the school’s first two first-team All-Americans.

Of junior Maggie Anderson, Bechard said, “Kind of our heartbeat and one of the best communicators and best Jayhawks you’ll ever be around. She got our team going a number of times with great serves. She communicates. She loves her school, she loves her teammates, she loves this program as much as anyone I’ve ever been around.”

Janae Hall, Bechard reminded the audience, won the Elite 90 Award, given to the Final Four athlete with the highest GPA.

Sophomore Madison Rigdon, Bechard said, had “the biggest kill in the history of the University of Kansas Volleyball.”

That would be the kill that triggered on-court jollity, the kill that sealed KU’s 15-13 victory in Set Five vs. USC after Kansas had fallen behind.

Then came a brief eternity of suspense.

“Then the rally, yes, the rally,” Bechard said to the delight of the crowd. “The ball crossed 13 times. Then the Jayhawks win. Next thing you know, big dogpile out there. What we don’t know is the Power and Light District (in Kansas City, Mo.) was jumping up and down, doing shots.”

At 1 a.m. Central time, when the match played in San Diego ended.

“I went to 23rd Street Brewery a couple of weeks ago, and the guy said, ‘Are you the volleyball coach? Man, we watched your match, and we don’t know anything about volleyball, but that was really fun.’ I think we spread joy from Los Angeles, which was an 11 o’clock finish, to Massachusetts, where I had friends watching at 2 a.m.”

In addition to Rigdon’s on-target laser that ended the suspense, Bechard relived libero Wait’s amazing dig of a blurry shot from Bricio.

“Biggest dig in the history of University of Kansas volleyball,” Bechard said. “She took Bricio’s best shot, ‘What else do you have?’ and dug it up.”

Bechard talked of junior Tayler Soucie’s strong play on the way to first-team All-Big 12 honors and lauded the reserves, including senior Anna Church, for keeping the starters sharp daily in practice.

Bechard also called attention to associate head coach Laura “Bird” Kuhn earning the national assistant coach of the year award and pointed out that as did Bird, assistants Todd Chamberlain and Lucas Yanez had phenomenal playing careers and handled their coaching assignments superbly.

Kansas set a number of team records, including best start (19-0), best finish (30-3) and best hitting percentage (.299, shattering the old mark of .254). The only schools to defeat Kansas, Texas (twice) and national champion Nebraska, played in the title match.

That’s great fodder for making heads swell. When the man at the head of the program spends the entire banquet doling out credit to everyone and everything except his mirror, that goes a long way toward explaining why conceit was nowhere to be found in the room.

I have been to Lawrence three different times since the tournament, and I can't find any volleyball t-shirts anywhere. I have been to several of the various stores, including the KU Bookstore in the Kansas Union, and no one has any. Too bad some sort of volleyball shirt celebrating this success can't be found.

This is such a great story. Let's keep the momentum going to build an enduring program.