The Jayhawks shot just 31 percent, including three of 16 from three-point range, and committed 20 turnovers.

“We really struggle to make shots,” KU coach Brandon Schneider said, “and I think that’s what happened to us today.” 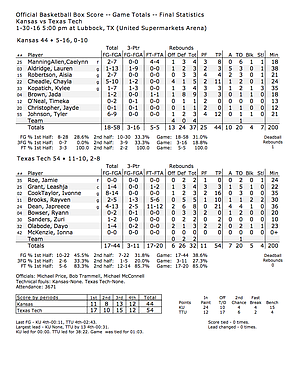 Lauren Aldridge was 1-of-13 from the field, Kylee Kopatich 1-of-7, and Caelynn Manning-Allen and Aisia Robertson 2-of-7 each.

“Texas Tech went ‘triangle-and-two,’ and we had to review what we really wanted to do against that,” Schneider said. “That is probably my fault for not going over more of that. Once we got a handle on what we wanted to run against that, we got a couple of baskets and got them out of it. I thought Texas Tech did a good job of being ‘assignment correct,’ and they took some good charges. For instance, we have some people on our team that you don’t have to guard, and Texas Tech didn’t guard them. I think that is pretty smart.”

“Something really positive that I think we accomplished today was holding Texas Tech to six offensive rebounds,” Schneider said. “Tech leads the Big 12 Conference in offensive rebounds with about 16. This is an area that I think we really performed well in. We got 14 more shots than Tech did and forced some turnovers, but we struggled to make shots. I thought Texas Tech did a good job mixing up their defenses.”

“Obviously, Japreece Dean really controlled the game,” Schneider said. “She is having a heck of a year, and I hope she will get strong consideration as one of the better freshmen in the league.”

Dean connected on 11 of 12 free throws and also pulled down eight rebounds.

I’ve known (Dean) for a long, long time,” Schneider said. “I’ve watched her play a bunch of games. She is a heck of a player and has a really bright future. I think she is really dangerous on ball screens because she can split you, and if she has a floater she can shoot the three. We have one player on our team that we thought could slow her down a little bit, and she was in foul trouble after that. I think we are a little short in regards to having the personnel that can slow her down.”

The Jayhawks will host Iowa State at 7 p.m. Tuesday.