Cyclones get defensive in second half to knock off KU

Kansas forward Perry Ellis (34) is stripped of the ball by Iowa State forward Georges Niang (31) and forward Abdel Nader (2) on his way to the bucket during the second half, Monday, Jan. 25, 2016 at Hilton Coliseum in Ames, Iowa.

Ames, Iowa — Known largely as a team that likes to get out and go and fill up the stat sheet while lighting up the scoreboard, No. 14 Iowa State knocked off No. 4 Kansas University, 85-72, on Monday night at wild and rocking Hilton Coliseum on the strength of its defense.

After giving up 43 points on 58-percent shooting to Kansas during Monday's first half, the Cyclones slammed the door to the tune of 29 points on 40-percent shooting during a second half in which they outscored the Jayhawks by 20.

“Our second-half defense was terrific,” said ISU coach Steve Prohm, who now holds the rare distinction of being unbeaten in head-to-head match-ups with Bill Self. “I'm really proud of our guys. We really played a complete half the last 15 minutes.”

Asked what changed in the second half that allowed Iowa State to seize control and ultimately run away with the game, Prohm stayed away from heavy X's and O's talk. 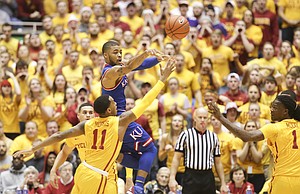 Images from the Jayhawks' game against the Cyclones on Monday at Hilton Coliseum.

“We challenged 'em and they challenged one another, bottom line,” Prohm said.

Of course, limiting Kansas, which got a game-high 23 points from Perry Ellis, was only part of the equation. The Cyclones still had to figure out how to overcome their own offensive struggles in time to surge past a Kansas team playing with a ton of confidence. Figure it out they did. Big time. Iowa State (16-4 overall, 5-3 Big 12) shot 64 percent in the second half and, at times, suffocated Kansas (16-4, 5-3) to the point where the Jayhawks could barely get the ball past mid-court.

“When we turned our defense into offense, that really changed the game,” Prohm said.

Iowa State point guard Monté Morris played a huge part in that, and there were more than a few players and coaches who called Morris the best player in the game when this one was finished. 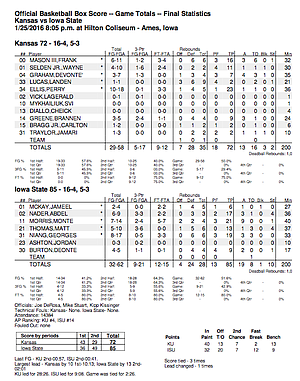 “Plain and simple, that guy over there,” said ISU forward Georges Niang, when asked how the Cyclones reversed their fortune in the second half. “We go how he goes. That guy has carried us all season. He's done a great job of leading this team.”

Added Prohm of Morris, who finished with 21 points, nine assists and four rebounds while playing all 40 minutes: “It's a tough job being a point guard. I'm gonna be on him a lot. He's playing really well right now. I've got a lot of confidence in him and I like the ball in his hands.”

“I think we guarded better (in the second half), especially myself,” he said. “I tried to do what I could tonight as far as wearing (KU's guards) down.”

In seven career games against Kansas, Morris now has tallied 37 assists and just seven turnovers. His 9-0 ratio on Monday night not only helped Iowa State win the game, but also showed just how dangerous this Cyclones team can be now that it's back in the Big 12 title hunt.

Bill Self: We haven't played with a lot of poise away from home

“We've got experienced guys,” Prohm said. “It's always a big game when it's the next game, but, obviously, Kansas brings a little extra to it. But these guys have won championships and knew they just had to keep fighting, keep fighting.... We were there, we were close, we were close and then when we finally hit 'em, it's hard to respond on the road.” 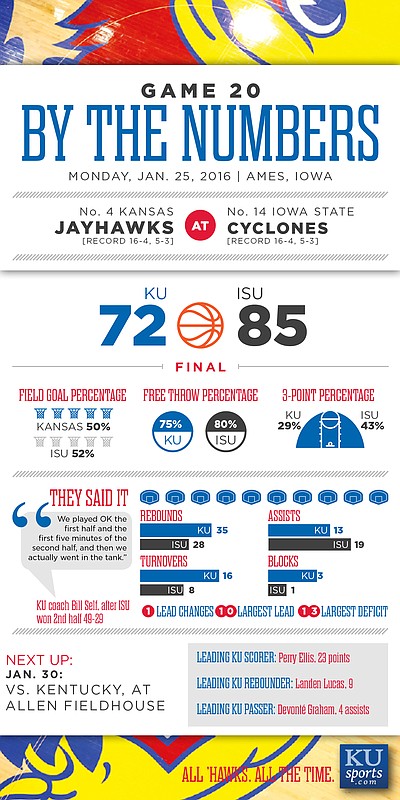 Nothing ISU did that changed this game, KU flat out fell apart in the last 15 minutes

Bill has to deliver on what he preaches - play the best players. That probably changes a little bit based on the matchups, but this team doesn't dictate style and pace. They get it brought to them. Even SDSU and Cal Northridge dictated pace of play. My grievances: 1. Lucas is a liability offensively. He's not athletic enough to receive lob passes. Success rate is probably less than 50%. No back to the basket moves or range on a short face up jumper. Bragg and Diallo bring more to the table. Coach hasn't put much trust in them so don't get to play. This type of approach may make it tough for Bill to land the kids that want to (and can) play right away. Oubre should have played way more last year. Cliff to a certain degree should have as well before the eligibility issues. 2. I'm over the two "point guard" description. With the assist to turnover ratio this team has from that position it's fair to say we don't really have one point guard. Can we pick one guard that is content to score less and focus on taking care of the ball while getting the scorers in position to score. Right now everyone is competing to out score the other and there are a ton of ridiculous shots attempted. 3. Our guards and perimeter defense is the worst I can ever remember. By my view Devonte is the worst of the bunch. Always caught out of position. I haven't looked at all the games but for all of our losses we have been scorched by guards. Abused. 4. On a related note the perimeter rebounding is a joke. Frank gets after rebounds but he might be the only one. I'll give Landen some credit on rebounding but he typically is in the paint. Devonte is the worst, but Seldon, Green and Svi all take a break on defensive rebounds. Rarely do we get offensive rebounds on missed perimeter shots because our guys like to leave that hand in the air and count it before it's good. FINALLY 5. Game planning has been quite puzzling. We're not trying to expose other team's weaknesses. This goes back to number one. Tonight when McKay is out of the game, Lucas should be out as well. There wasn't a person out there that Lucas could guard at that point. I have noticed it so I'm sure Bill has noticed it - teams are playing a four out spread on offense because they know we aren't disciplined enough to maintain our assignments. If Bill wants to stay man, then the guys should be aware AT ALL TIMES which players they absolutely can not lose sight of. He has to be willing to use the bench if it isn't getting through. 5b. If you're going to stick to this guard heavy plan you have to stay sped up and be in attack mode. You have to tire teams out. Not be the one that is run down in the second half. To do that you have to use your bench... ALOT. If you're not, then you play the matchups go with your scouting reports.

This team is confused and lacks an identity.

Poor dissertation. KU was doing OK until ISU's pressure caused Mason to completely fold. He made several colossal mistakes in a row and the rout was on.

Self needs another ball-handler with poise. Look to the 2017 class for the answer.

ISU only goes 6 deep. How is it they run you down in the 2nd half as you have the deep bench. Conditioning? No. perhaps passion and intensity. ISU wanted it more. that you cannot measure .IB