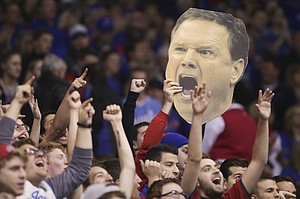 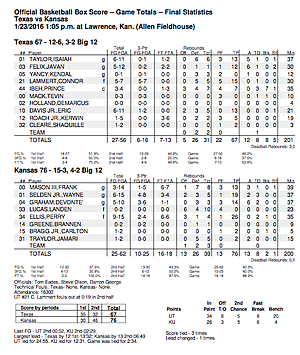 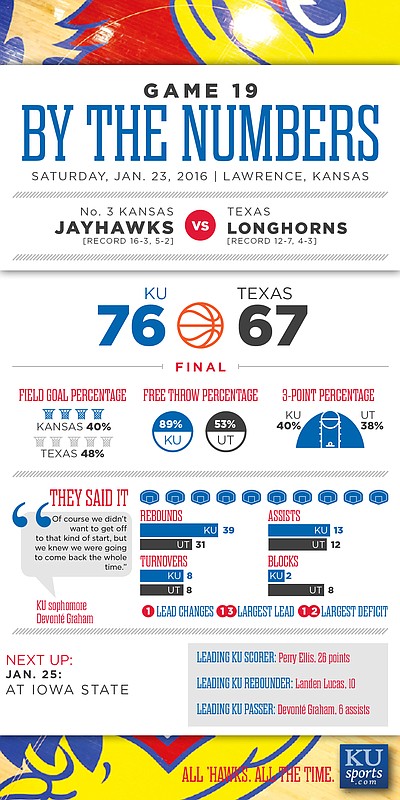 I worry about the 4 wearing down by the end of the season. March becomes such a grind - especially if you tank's on E.

Agree. Big12 is such a grind that we lose steam by the time the end of the regular season approaches. Unfortunately we have to take a pick... go all out during conference, or post-season.

In 2012 - Robinson, Taylor, Johnson, and Releford all averaged over 30 minutes a game -- mainly because of a lack of depth. They made it to the title game that year. So it depends on the resolve of the players playing those minutes.

That's what conditioning drill is for. I'm all for the 4 playing significant minutes every game. They will get tougher and more experience every game. We shouldn't worry too much about them being worn out. I would be more worried how deep we'll march comes Feb.

I knew this was part of the problem and it's got to be nagging him mentally. It also causes him to force at times instead of recognizing his limits. He tends to overplay. I get he's tough, a 'bulldog,' but it's getting to the point that he's become a slight liability. He needs to stop forcing and start leading. He needs to let the game come to him. He needs to play within himself, protect himself, and help the team by directing traffic. He needs to be a floor general. I hope he heals quickly, because we'll need him down the long stretch.

It is not just an issue of endurance and being in condition. Every game when driving the lane he gets hammered, some of which are called fouls, and he takes 3 to 4 hard, hard falls each game. With all due respect Joe, I don't think he is a "slight liability". Coach gets on him for not beating his defender off the dribbleI more often then he does.You think he is forcing, Coach doesn't. I'm not sure a point guard can sit back and "let the game come to him". A point guard needs to initiate the action. In light of our struggles in the half court offense, it is imperative that Frank and Devonte kick start the offense off the bounce. Granted, Frank's performance against WVU was poor. With regard to Frank I do think the constant beating he receives, has adversely affected his shot. Saturday he was 1 out 5 from three. All of his misses were short, Which can be an indicator that he is "leg tired". He did take care of the ball with 3 assists to 1 turnover. Without an inside offensive presence when Landon and Jamari are in the game, who we can throw the ball to and score, there is more pressure on Devonte and Frank to create for others. Another thing to consider in judging Frank's play in conference is the effect covering the other team's best guard has on his abilities on the other end. He covered Hield most of the game and he was on Taylor most of the game against Texas. As you are aware, part of being a floor general is getting your teammates the ball in positions most advantageous to their offensive strengths. This is done most often by getting in the lane off the bounce then dumping the ball off underneath or kicking out to the arc for a three. It would benefit Frank if he could average 28 to 30 minutes of the game instead of the 36 to 38 he currently averages