The result was a predictably lopsided loss — 72-35 on Saturday at WVU Coliseum. 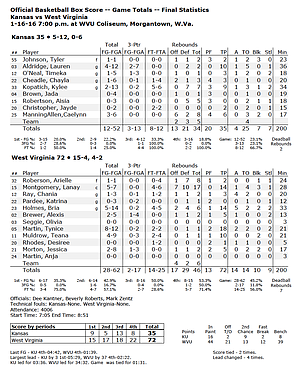 “First off, I congratulate coach Carey on his 600th win,” KU coach Brandon Schneider said. “That’s obviously a significant achievement for any coach, and he’s done a great job for a long time. I give him a tremendous amount of respect for how he operates his program and how hard he gets his girls to play. Again, completely disruptive for us, probably not the opponent that we need to be playing with the youthful team that we have and our ineptness on the offensive end.

“They were a big reason for that. They really make it difficult for you to turn the ball from one side of the floor to the other, and when you do turn it over and take a bad shot, they are terrific in transition.”

I said it before and I'll say it again. It is hard to see how this team wins again this year.
Either they are not doing what the coach wants, and or they are so non-competitive that it does not matter.

Does anyone remember a worse women's team? I mean 35 point losses?

Do we not have coaches/players meeting the press? I am curious to find out what they think the reason for this is... We were not that bad last year, but we did lose some great players during the off-season.

Good question. And they do have 2 high school all-amrican transfers (guards) for next year. But unfortunately they have no seniors, so unless somebody leaves, and that is quite possible, they will remain incredibly undersized. So they need to figure it out. I seriously wonder who they are going to beat and how.

I had no idea Women's ball was in the same boat as mens fball. Good coach, but starting from scratch.