Cheick Diallo — who is hoping to have a long NBA career like the great Wilt Chamberlain — didn’t choose his college jersey number as some sort of tribute to Kansas University’s most accomplished No. 13.

“Well, my birthday is Sept. 13. That’s why I chose No. 13. A lot of people think I chose 13 because of him. No, I’ve worn 13 since I started playing basketball. It’s not anything about him,” Diallo, KU’s 6-foot-9, 220-pound freshman forward from Mali, said after scoring nine points, grabbing nine rebounds and blocking five shots in the Jayhawks’ 70-63 win over TCU on Saturday in Allen Fieldhouse.

“I came here and people said, ‘You are wearing his number.’ I said, ‘Who is him anyway?’ I do my research so I know who is him now,” Diallo added good-naturedly.

KU fans can’t help but think about Wilt — at least a little bit — when they see Diallo swat shots as he did in 21 minutes of action Saturday. 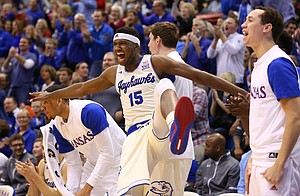 “That’s what I do best. Blocking shots is kind of easy for me. My wingspan is 7-4 1/2. It’s really easy,” said Diallo, who exhibited good timing on his rejections.

“I count in my mind a little bit. One second, two. Two seconds I jump,” Diallo said. “If you are a shot-blocker you have to take a little time. If you jump first, you will not get a block.”

Diallo hit four of seven shots and one of two free throws. He cashed an 8-foot jump shot the first half, then deposited an alley-oop from Frank Mason, hit a 10-foot turnaround jumper and scored off an inside spin move all in the second half. 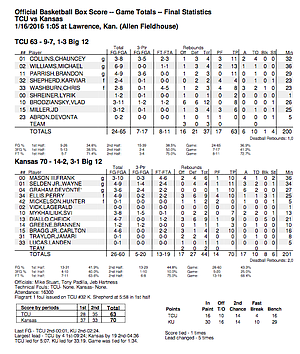 He was asked about his jumper tending to not have much arc.

“It’s because I jump high,” Diallo said. “I jump high and it’s not gonna come down, just go straight. I think I’ve improved a lot. Before I could not hit a jump shot. I’ve been working on my game every day.”

Diallo, who had played just 18 minutes combined in KU’s first four Big 12 games, totaling four points, one block and five rebounds, figured he’d play more Saturday since Perry Ellis and Hunter Mickelson both picked up two first half fouls and Jamari Traylor took a shot to the face (actually administered by Diallo) on a rebound, limiting his time the final half.

“The first half I played like five minutes (six minutes, two blocks, two points). I was getting a little confident. I said, ‘OK I think I can do it,’’’ Diallo said. “The second half I just bring all energy. I said, ‘Now that’s the time I can show everybody I can play.’

“Sometimes if you get tired, of course you need to come out,” noted Diallo, who said he never got tired Saturday. “I just feel I can play more. I do. I feel like I can do it. It’s not my decision. I’m not going to go to coach, ‘Oh, why are you not giving me time?’ I can’t do it. It’s coach’s decision,” Diallo added.

He’s not ever complained. In fact, during the first four Big 12 games, he was totally into the games despite mostly being a spectator.

“Obviously TCU plays a lot of bigs,” Self said of the Horned Frogs, who fell to 9-8 overall and 1-4 in league games; KU is 15-2, 4-1. “Those (two) guys did some good things. They have certainly earned some more minutes. They are getting better, no question about it. Cheick’s attitude has been so good. You can’t help but get better when you care as much as he does.

“He’s a fabulous kid. Everybody wants to play and he wants to play. You can see how raw he is, but you can also see how he can do some things to change a game that nobody else in our program can. We’ve got to get him more minutes. He’s earned them, but it also would definitely help our team down the stretch if he is a little more seasoned player. There’s no way he can get there unless we give him a chance to work through some things. I’m really pleased with his attitude.”

Diallo and frosh forward Bragg are quite a combo at practice.

Diallo said he loves the occasions when he’s on the court the same time as senior forwad Perry Ellis, who Saturday had 10 points and nine boards in 25 minutes. Bragg, Frank Mason III and Devonté Graham also had 10 apiece on a day Wayne Selden, Jr., led the way with 11 tallies.

“Perry is a senior. I am a freshman. If I play next to him, I can get a lot of experience. It’s helped me a lot playing next to Perry,” Diallo said.

Diallo, who is an outgoing person, said he continues to text Self daily, as was his habit before he was declared eligible by the NCAA.

“I still do. It’s because I want to get better. Every single day I want to get better,” Diallo said. “I ask him after every practice what I need to do now. He says, ‘More rebounds, block shots, running the floor.’ I say, ‘OK, I got you,’’’ Diallo added.

As far as Saturday, “I got nine rebounds, five blocks, that’s pretty good. I can do more. I can get more rebounds and blocked shots,” Diallo said.

Perhaps he can land a triple-double at some point, considering he was reasonably close in points, rebounds and blocks Saturday.

It sure would be nice to see Bragg and Diallo get it all together for a February-April run! Both those guys are much better athletes than any of the bigs we have. They both can get boards and score inside, or so it seems. Diablo did miss the dunk and Bragg missed a couple. The OSU game Tuesday night will be a major test for them and the rest of the team. I hope we can bring some energy.

Maybe we can transition into a more balanced team. Hope it works.

no doubt that was Diallo's best game. much improvement. and his shot blocking was causing TCU to alter shots. we need him in at least 20 minutes per game rest of the year.

I agree with HCBS that Diallo needs more game playing time to reach his potential. This is contrary to a recent article arguing that all Diallo needs is more practice time.

Jared, I believe that Cheick's improvement may have a lot to do with the virtually unlimited practice time the team gets during winter break.

One thing for sure, this kid has the best attitude that I've ever seen. As he starts to play more, he could become an infectious source of energy, right when we need it.

There was not much practice time over the Christmas Break. After the SDSU game, which came on the heels of Finals, the team took a 4-day Christmas break. Upon returning, they had only about a week to prepare for BU and OU, January 2 and 4, respectively. Not a lot of time for unlimited practice.

Ummm, yesterday's game took place on Jan. 16. You left out about two weeks of the winter break. It's commonly know that the practice schedule ramps up over the break - they used to do stories on it.

Is your alternative theory that Diallo improved by sitting the bench over the past several games?

With Conference Play commencing over Christmas Break, there hasn't been all that much time for excessive practice. Self gave the guys a day off after the OU game and the heavy minute guys another day.

Diallo's and a lesser extent Bragg's, improvement could be best traced to hard work in practice. Self even voiced how well they had preformed in practice this week, to the point of thinking about starting one of them. However, we are spitting hairs with regards to the pessary prep they need to get to where we need them. At this point game time is vital.

Calling BS. Love to see the link to anything recent that says exclusively practice time is needed to get Diallo to his potential.

You have to know what you're doing in practice before you can ever hope to be effective in games. Diallo was constantly out of position on both ends of the floor, didn't pass the ball whem it got to him in the paint. As a player starts to understand the basic concepts of where he's supposed to be the floor, he then needs the live action to fully refine the skills being developed in practice.

So while a player will absolutely never reach full potential in practice alone, practice is also where a player soebds the most time working on skills because there's only 80 minutes of game time (and that's only if a player never leaves the floor) most weeks compared to a possible 1,200 minutes of practice in a week (20 hours). Teams obviously don't spend that much time practicing because of lifting and film work, but they still about 10× as much practice time as game time. Knowing that, where do you think tge majority of player development happens?

It wasn't an inspiring win by any stretch, but we are now back in a four-way log-jam for first place in the Big 12 - with West Virginia, Oklahoma, and Baylor. Yes, the same Baylor team we squelched two weeks ago; the Bears haven't lost since we made rugs out of them on 2 January.