The Jayhawks trailed by only three points at halftime but were outscored 16-9 in the third quarter and 21-15 in the fourth period.

Lauren Aldridge scored 12 points for KU, but she was the only Jayhawk in double figures. Caelynn Manning-Allen and Chayla Cheadle scored eight points apiece, and Jada Brown scored seven.

The Jayhawks shot just 34.6 percent from the field, committed 17 turnovers and were outrebounded, 40-31.

Jadda Buckley and Bryanna Fernstrom scored 12 points each to lead Iowa State, followed by Bridget Carleton and Nicole Blaskowsky with 11 points apiece and Seanna Johnson with 10. 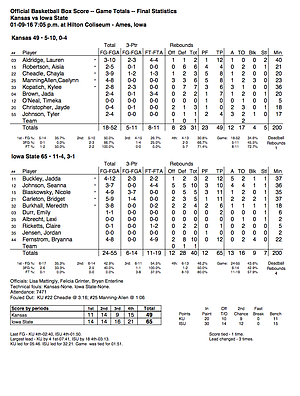 “Well, we cut it to five, and then Aisia Robertson picked up her fourth foul,” KU coach Brandon Schneider said. “We had to bring Jayde (Christopher) in, and we made a couple mistakes, and they got it back to 10.

“In the third quarter, I thought they did a much better job at the free-throw line than we did,” Schneider said. “It was in that quarter where the foul disparity was significantly different. Then in the fourth quarter, we weren’t keeping it out of the post. They were getting too deep on post-ups.”

“Well, we held them to 10 fewer three-point attempts than what they average,” Schneider said. “We held them to only two three-point makes in the second half, but like I said, it turned into a paint game, and they end up with 30 points in the paint.”