Monday’s game was the third triple overtime game in KU history. There have been two quadruple OT games.

The last triple OT contest was a 76-73 loss at Oklahoma State in 1981. It was the longest game ever played in Allen, the first triple OT game in KU's historic venue.

• OU scored the most points by a KU opponent inside Allen (106) and third-most ever vs. KU. 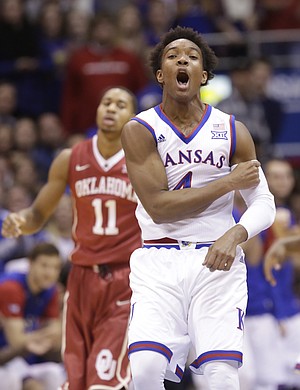 • Buddy Hield’s 13 field goals were most since Ben Woodside of North Dakota State hit 13 vs. KU in the 2009 NCAA Tournament. It was most in a conference game since Kevin Durant hit 13 in 2007 in Allen.

Hield's eight threes vs. KU were most since Alan Voskuil of Texas Tech hit nine in 2009. 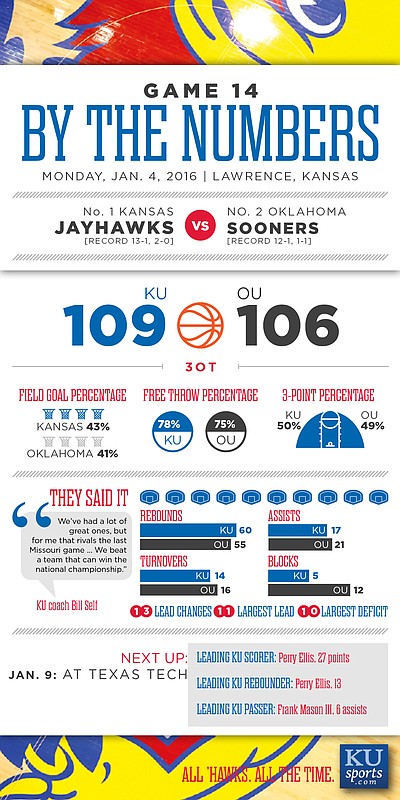 Unless it's corrected, the second paragraph makes it appear as if the 1981 game was the only triple OT game in KUs history, because it refers to it as the last and the first triple OT game.

The LJW sportswriters were up late last night, so naturally they probably overlooked some details like that.

Additional factoids: This marks the 10th time in KU history that an opponent has scored 100+. Interestingly, Oklahoma has done it the most: 4 times. (Kentucky has done it twice).

I dont think I saw it mentioned prior to the game the very well known fact that OUs coach was from Kansas, and KU's coach was from Oklahoma. Just an interesting story line

Furthermore, I believe they were both the HS 'Player of the Year' for their respective states. Back then, Kansas decided in favor of Aurora Illinois Tom Kivisto over home-state hero Kruger. Now, Kansas decided in favor of Roxbury, MA Wayne Selden over Wichita's Buddy Hield. I'm not complaining because things worked out great for everyone but it shows people need to look to where they best fit.

You're right, Joe. Hadn't thought of that. That's one reason why you are unique. Not much slips past you. Good catch!

Has Kansas ever posted back to back 100 point games in conference games?

Devonte' Graham is going to continue to be one of your best players. I've followed him since he was in Middle School and when he was the star of our Broughton High Basketball Team when he was a senior. A terrific BB player and an exceptional young man. We are pulling for him here in Raleigh. I pull for UNC here but if they were playing Kansas I would probably have to pull for Kansas.

We're glad he's here. He continues to impress and show us new dimensions with every game. A really smart and skilled player with moxie. We're happy to hear from you. I really like the dynamic team UNC has on the court this year. Johnson and Paige were both spectacular Monday night. Anyway, if we do meet up it will be deep in the tournament :-) Good luck to you and glad you chose to share!