Kansas forward Jamari Traylor (31) hooks a shot over Kentucky forward Marcus Lee (00) for a foul late in the second half, Saturday, Jan. 30, 2016 at Allen Fieldhouse.

If nicknames were handed out to athletes based on the most common words their coaches used to describe them, Kansas University senior Jamari Traylor would be known as The Spark.

Hardly a week has gone by during the 2015-16 basketball season that KU coach Bill Self has not made note of a short but important stint by Traylor impacting the game in a positive way.

The examples are endless, easy to find and just as easy to overlook, and they illustrate with great certainty where Traylor’s mind has been during his final season as a Jayhawk.

“I just want to win,” Traylor said. “When my number’s called, I just want to go out there and do what I can to affect the team in the best way that I can.”

The way Traylor has sparked the team this season may not have led to more minutes, but it has earned Self’s admiration and set a great example for the Jayhawks’ supporting cast, a group that, for the most part, has stayed ready to contribute even while enduring long droughts — sometimes minutes, sometimes games — between time on the floor. 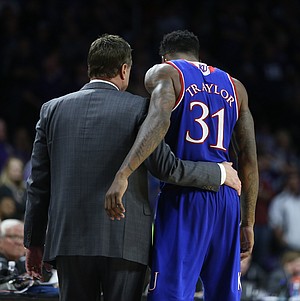 Kansas head coach Bill Self puts his arm around Kansas forward Jamari Traylor (31) before sending him in the game to replace Kansas forward Landen Lucas after Lucas fouled out late in the second half, Saturday, Feb. 20, 2016 at Bramlage Coliseum in Manhattan, Kan.

“Jamari has been as good a teammate as you can have,” Self said. “I’m real pleased and proud of how our guys have hung in there and been really together and unselfish. ... Our attitudes have been, not good, great.”

It was not always this way for Traylor, now in his fifth season with the program. From the scars he carried with him from a tough upbringing on the rough streets of Chicago to the combustible attitude that made him known as much for his explosive body language as his ability to get buckets, Traylor’s journey as a Jayhawk has been as much of a roller coaster as his personality once was.

After sitting out alongside Ben McLemore as a partial qualifier during KU’s run to the national title game in 2011-12, Traylor saw an increase in playing time during each of the next three seasons. From 10 minutes per game as a red-shirt freshman to 16 as a sophomore and 20, with 18 starts, a season ago, Traylor appeared to be growing with his role. This year, however, as Traylor’s time on the court has been closer to what he was given as a first-year player than an experienced junior — 13.6 per game overall, 11.9 per game in Big 12 play — his approach and mind-set have been better than ever.

Rather than sulking and letting his face show his frustration, Traylor has chosen to treat each opportunity the way hockey players hop over the boards for a line change — with 90 seconds of constant, all-out effort.

Traylor seems to understand that players don’t need to play 35 minutes a night to make a play that changes the game. They just need the chance and the heart.

“I definitely want to play,” Traylor said. “But more than that, I want to win. It’s my senior year, and when we win big at the end of it, it’s gonna be a bigger piece of the pie for everybody. You gotta sacrifice a little bit for the greater good.” 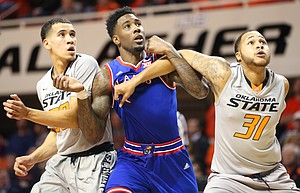 So as his minutes slipped, Traylor refused to let his attitude slip with them. He credits former teammate and current Los Angeles Lakers forward Tarik Black for helping him embrace a more limited role and pointed to a January text exchange between the two former front-court-mates that made acceptance easier.

“In the text, he said, ‘I’m sitting on the plane with Kobe (Bryant) and on a bench in the NBA right now when I could be somewhere else doing something crazy,’” Traylor began. “That had me like, ‘You know what? I’ve got nothing to complain about.’ “He was saying, ‘Man, at the beginning of my senior year I didn’t even play, I was fouling and didn’t play, and now I’m in the NBA making money when I could be on the streets in Memphis.’ That really hit me because it made me think, ‘You know what, I could be in Chicago right now doing something crazy.’

“So I just look at guys like that and appreciate the example they’ve set. I’d like to be Tarik right now, making a lot of money just playing ball and doing what you love to do.”

Traylor said the compliments from Self and appreciation and respect his teammates have tossed his way have made him feel like a critical part of this team, even if his 3.0 points and 3.4 rebounds per game don’t scream that.

One man who has helped Traylor focus on his role and savor every minute of it is KU director of student-athlete development, Fred Quartlebaum, who at times this season has sounded a lot like Traylor’s corner man.

“Coach Q’s always in my ear saying, ‘Senior year. Enjoy the moment. Time’s tickin,’” said Traylor, shaking his head and laughing. “It’s kind of sad, really, but he says it all the time, so as far as embracing the moment, I do that every day.”

As for what comes next, Traylor has not ruled anything out. Like his buddy, Black, he certainly hopes to get a crack at the NBA, but also, after all these years and lessons, is realistic enough to know that plane rides with people like Bryant might not be in the cards for him.

“Everybody wants to play in the NBA,” he said. “That’s still a dream and everything, but I just want to play basketball after college. If I have to play overseas, I’d be cool with that. It’s never a bad thing to make money to play basketball. I’d do it for free.”

Traylor knows nothing will come free for the Jayhawks (25-4) the rest of the way. Even with a 12th consecutive Big 12 title now theirs and landing yet another No. 1 seed in the NCAAs growing more likely by the day, Traylor said this year’s group remains hungry and focused on what a few more weeks of grinding and smiling might deliver.

“If I could write the script,” he began, “there’s all these teams out there that can win it, and everybody’s gonna go hard, and I just feel like, ‘Why not us?’ We put in enough work. We’ve got the group. We’ve got the coaches. Why not us? That’s the goal — the whole thing. That’s just how our minds work and where our motivation is.”

Traylor, I hope you get some advice from Black, too. Take a look how he provides sparks off the Lakers bench. Look how he sets up screen and rolls to dunk hard. That's what you can do, too. I'm sure the coaching staff won't mind to have another offensive spark from you.

Don't let people say you have to stay within your role (providing only screen, rebounds, small jobs here and there)... That's just not going to work if you want to get to the next level.

You need to show people that you can do MORE. Show them you are better than what they think. Talk to Svi, talk to Perry or Selden or Graham, ask them to try out during practice. Pass a lob to you, get pick and roll going, get used to fast pace game.. Get to the next level, my friend. Whatever it takes. Just do it! I believe in you! We all believe you can do MORE.

Jamari would be hurting the team if he tried to do more than is expected of him. He's fallen into his role very well this season and is one of the reasons KU has been successful. This team doesn't need, nor want Jamari taking jumpers or breaking his man down off the dribble; there are better options than that. Rebound, block shots, and set (legal!) screens. That's what Jamari has been doing well and continues to keep doing well. He's had a really solid year despite his relative lack of production, IMO.

And, most of all, listen to and do what the coaches tell him to do, not what anyone on the street suggests.

I respect your opinion Joe. We've seen what he can do other than what you said (rebound, block, screen); we saw him receiving a pass from Svi and scored, we saw him taking off and dunking the ball after a fake and a quick 1-dribble, we saw him taking a lob. I'm just saying Jamari can be another option of an offense and at the same time it will help Jamari to push him higher in the draft.

Call me crazy but with the emergence of Draymond Green and the small, quick Center position I think Mari has a shot in the NBA if he goes to the right organization. Light feet on D, fairly accurate from 10-12 ft and in, great energy/hustle, really the only thing negative ab him is he is undersized. Imagine if that kid was 6'10, yikes! I wouldn't go as far as saying he should be drafted he definitely has to earn it this summer but if he puts in the work, maybe go work out with Tarik, he could get a break and make a roster. Something numbers can't measure is heart, if it could it would be off the charts for this kid for as much as he's overcome

You're not crazy, Cam. Jamari version 2.0 will be released soon!

No doubt about it, Jamari Traylor will be a great success no matter which direction life takes him. Heart/Hustle like that which he possesses will not allow him to be anything but successful. Thank you, Jamari, for everything you have brought and given for KU.

I would love to see some advance statistics on shooting percentages and shot clock used when Jamari is in the game. Noticed it on Saturday. Whenever he is in there, teams just seem to take forced shots sooner in the shot clock, which in my view is great for this KU team because the more possessions there are in a game, the better chance this team has to win as well as they score it.

You're not crazy, Cam. I suppose an NBA opportunity may be stretching it a little given all of the talent, but I would think that overseas would present a very good chance for Jamari. If not, I hope that he will follow his dreams to work with the youth. Perhaps a spot on KU's staff wouldn't be out of the question.

If your observation is accurate, Michael, you have really hit on a hidden treasure. I'll have to watch the replay more carefully now to see if I can be as observant as you were.

The Chicken Little club members who ranted that Lucas and Traylor should see ZERO minutes have suddenly become scarce.

Every year I am amused by posters who in December proclaim "If (player) is starting in March, we're in trouble!" We've all seen those exact words a hundred times. There are always rationales based on perceived "ceilings", other players who "deserve" the minutes, etc. Oftentimes other players do surpass (player) and start instead. But it's not uncommon that (player) develops in ways that even knowledgeable fans could not have predicted in December and he turns out to be a key to success. Don't get me wrong. Those kind of statements are an interesting part of the give-and-take on this discussion board! It's simply the absolute certainty with which such December proclamations are made that makes me smile.

Matt, I forgot to say, this is a GREAT article. Thank you for the timing article.